It's clean and ready, 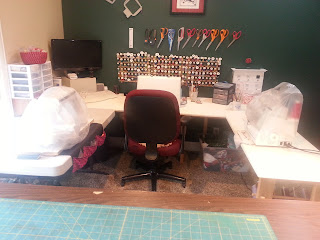 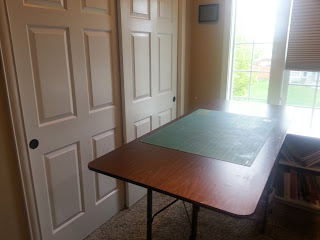 but I don't really get to play in it now because I don't have time and sewing makes a huge mess, or at least it does when I do it.  It's so funny that I'm this sad about not being able to sew--I originally learned to sew in 4-H and HATED it.  I think I could have enjoyed it, but for my mother, it wasn't important just to learn something or--heaven forbid--just getting to enjoy something.  Nope, it had to be about earning a blue ribbon at the fair.  Not for my sake--for hers, because I didn't care.  But sewing 4-H was about her being AT me all the time about it constantly--no wonder I gave it up for showing cattle because it was outside and I could do it myself without her bothering me.  I actually liked the sewing part, but the whole experience was so hateful that I didn't attempt it again until I was well into my 30s.  I think the saddest part is that she still has my 4-H ribbons and won't throw them out even though I have asked her to do so--I guess they mean that much to her.  Heaven knows I don't want them and can't stand the sight of them.

Speaking of getting rid of things, I found a quarter yard of the world's most obnoxious fabric, 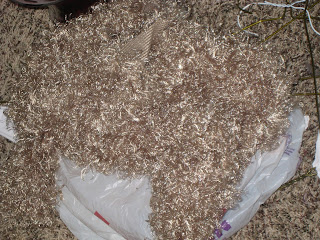 and some acrylic yarn lurking in the back of one of the closets. 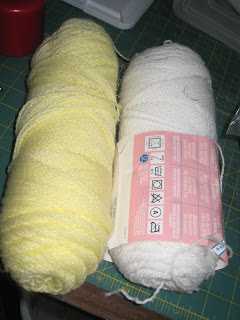 These are from the puppet "kits" I made years and years ago for our youngest nieces and nephews.  They aren't listed in my stash anywhere, but I am totally counting them in my stash totals for the year.  I'm not clear why they were in that particular closet, but we're kind of at the last stages of cleaning when things don't really have to make sense.  Yesterday I had to text Andy to come and rescue me from our bedroom because he had removed the doorknobs to touch up the paint, and without thinking about it, I had closed the door and only LATER found out I couldn't open the mechanism without a knob.  At this rate, having strangers traipsing through our home might actually BE the more relaxing part of this endeavor--at least for us.  We're not really sure about the cats, but at least they have access to the backyard and we have the kitty pheromone spray that seems to help calm them.  And there's always the de-stress pills if that doesn't work.