...and Valentine's Day being just 4 days away, it was time to revisit the place mats. 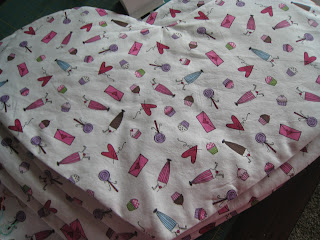 I like the idea of whimsical swirls and hearts to secure the batting, but I decided not to sew them by hand as that never seems as secure as machine stitching, and my capacity to sit is not improving much after last weekend's choir escapade, so... 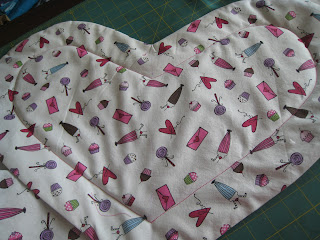 concentric hearts it is.  I put a piece of masking tape on the throat to use as a guide (the sewing machine's, not mine) to do the first stitch, then added more seams in different colors: 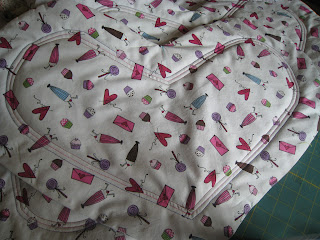 I was hurrying to get all 6 done, so there are a few wonky bits that need to be ripped out and done over, but I was hurrying to get them done before I ran out of ability to sit, so if all else fails, all 6 are ready to be used if I don't get time to clean the seams up.  Theo was on-hand to help with the sewing, 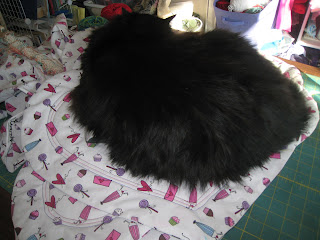 though he's still displeased over the new table height.  For a while he had taken to sleeping on the floor near the sewing room table, but that is A. undignified, B. probably dangerous in the sewing room, and C. could mean there would be sewn items without cat hair, which, of course, would be a kitty tragedy.  So this is the new approach.

Aside from back issues, this week I've also caught a cold, so have been doing a lot of resting, which actually makes the back issues worse rather than better, but at least it helps with the 12 sweaters issue.  The new blue sweater's back is to the armhole decrease 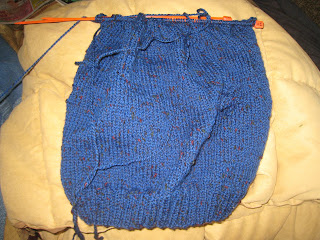 which is where it's going to stay for a while.  The sweater has raglan sleeves, and the pattern says to sew the pieces together, but aside from the fact that it's totally stupid to sew more seams than one absolutely has to do, I don't ever get the seams to look quite right on the few times I've been foolish enough to attempt sewing raglans together, so I'll finish the next pieces to the armholes and just knit them all together from armhole up.  I could, of course, have knit the entire body in one piece, but that would have meant passing up on one big block of plain, mindless, stockinette stitch in a non-splitty yarn, which is totally fun with a squishy yarn AND probably a lot safer while on cold medication.

This all sounds like I'm completely falling apart over here, but aside from not being able to sit and being banished from walking outdoors, my back is light years better than it has been, and even getting a cold isn't really a big deal since I always get at least one cold during the winter--usually several--and I spent all of December being terrified of catching a cold or anything that could involve coughing or sneezing.  Now, sneezing doesn't hurt a bit, so I'm just really relieved I didn't catch any colds in the last two months.  AND, when one is feeling under the weather and one has a built in excuse for almost any sort of self indulgence.... 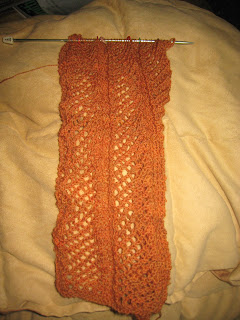