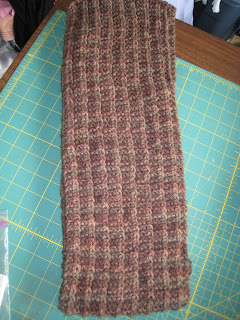 and the crafting jacket finished today by noon. 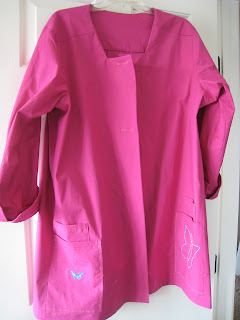 OK--yes, technically this was supposed to be finished in February, but I think even our mortgage company might give us 5 days for a "grace period," so I see no reason why the Project of the Month shouldn't get one as well. It still needs 2 large buttons--which I don't have--and will need to be washed, but I'm pleased overall.  It's rather bigger than I thought it would be, and I'm not sure if it's just supposed to be fairly big or if this is one of those "no-woman-wants-to-wear-a-large-so-we've-made-the-medium-humongous"  sort of things.  Still, I think it will be nice to have in the crafting room, and add 2.75 yards of fabric to the "all used up" category.

Swearing that I would do better this month, I decided to cut out the March project of the month: 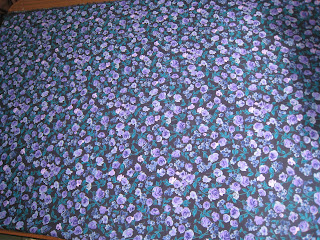 though my suspicions of anything called "easy" were confirmed almost immediately.  See this piece: 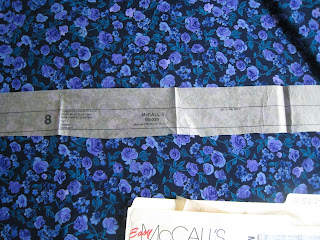 It's the elastic guide, and though it doesn't show up in the cutting diagram, that itty-bitty writing on the right states it has a 3/8-inch seam allowance.  Now I haven't been sewing very long, but in my limited experience, elastic doesn't usually get a seam allowance--especially one that is actually wider than the elastic called for--so I thought I would check the pattern instructions to make sure that it really was an elastic guide and not something that really did need to be cut out of fabric--and would presumably then HAVE a 3/8-inch seam allowance.  So: 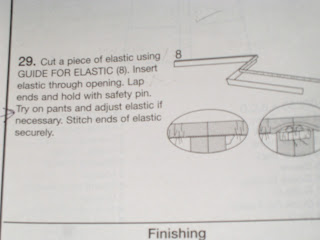 The good news is, it really is for measuring the elastic.  The bad news is, the person who wrote the instructions for this 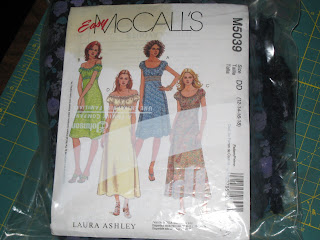 pattern believes we are making PANTS.  This is going to be good.

I did get everything cut out, 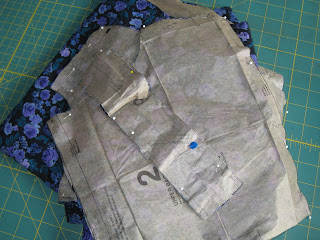 but we are having dinner with some very lovely friends tonight, and I didn't want to start sewing anything that was almost certainly guaranteed to leave me in a bad mood by evening, so I decided to sort through my stash of trims to see if I had any that would work for this dress, and this 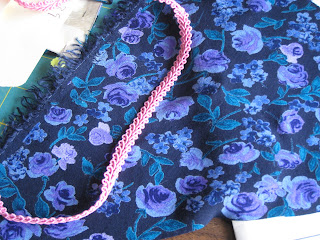 is the closest contender.  There are two strips of trim at the waist and I think some around the sleeves, but I'm going to see if I can find something in a color I'm already using.  Maybe purple?  Lavender?  I don't want anything TOO frilly just in case I end up with pants or a hat or something........