There is SUCH a fine line between "optimist" and "slow, slow learner." Really, somewhere deep down I know that it takes a while to recover after surgery, but every day I'm still surprised by my inability to do things. I had my first outing on Thursday--my mother taking me to the grocery store--and I had to spend the rest of the day in bed. If I'd have known that I would have aimed a little higher than fresh produce. Did you know taking a shower can be exhausting? I didn't either, but I actually have to lay down and REST afterwards!. Three and a half more weeks.....three and a half more weeks....then, LOOK OUT WORLD!!!!

I'm still struggling with sewing for any length of time, but I did get the bags finished 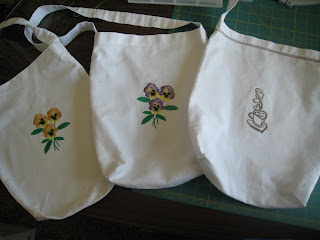 and because I really need to be DOING something, I'm stockpiling gifts. Yet another washcloth: 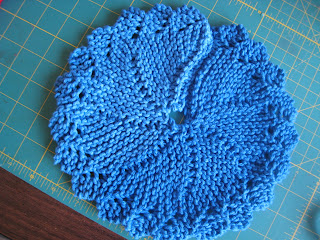 I like Alison's idea of using them for baths instead of dishes--at least the round ones. Who really feels that festive about washing dishes?

Yesterday I dug out an old pattern for Christmas ornaments: 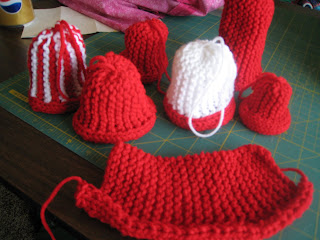 The tall one looks a little silly--it was one of those "oh-I-don't-need-to-look-at-the-pattern" episodes which consistently get me in trouble but which I even more consistently continue to not learn from.

This one is my favorite: 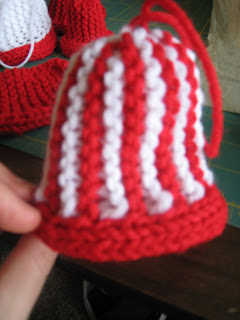 I actually have no idea how much yarn they use, but I'm giving myself 10 yards per bell toward the stash. Not that the Red Heart icky acrylic yarn has ever been counted as being "in" the stash, but yarn used up is yarn used up.

AND, I got 2 steps done on the dress! At this rate I could be finished by next week. Thank heavens there isn't a zipper--that could cause a serious setback!