My back is finally starting to feel better, so I was able to visit OTHER rooms in the house today, including the sewing room.  I can't sit for very long, but I did manage to make two more trees using darker green felt 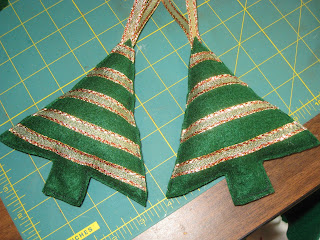 After that, it was a bit too painful to sit, so I switched to projects that could be done while standing.  I tried a conical tree idea, 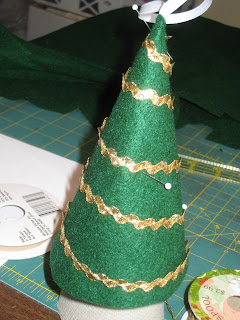 and I'm pretty sure I made it in the most complicated way possible.  I got the bright idea to start at the bottom so I had the edges lined up exactly, which made it really hard to stitch as I made my way to the top.  Pinning the rickrack in place didn't help much, but I did finally manage to get it tacked down, 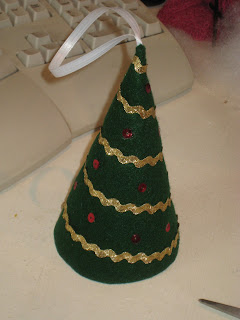 then to top off the fun I added individual sequins using the glue gun.........then spent another 30 minutes cleaning the hot glue threads off of absolutely everything.  I usually have to bring the glue gun out once a year to remember why I never use it.  I'm generally pleased with the ornament, but I need to make some changes before trying another one.  Or increase the drugs...........

After having spent most of the week in bed, being in the sewing room was exciting enough to attempt something completely new, so 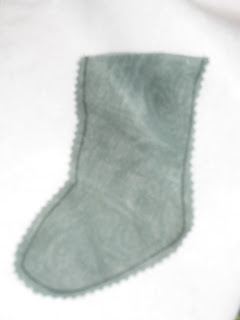 I dragged out the green organza I bought on clearance last year.  I thought it would make great Christmas ornaments.  The only problem, of course, is that I haven't been able to figure out what to do with it.  My original idea was to turn the stocking so the seam was on the inside, but that didn't look very good, so I decided to pink the edges.  I'm thinking it could still turn out well if I add a nice cuff to the top, but was out of ideas and needing to rest by this point.

Which was a good time to try a new ornament idea, 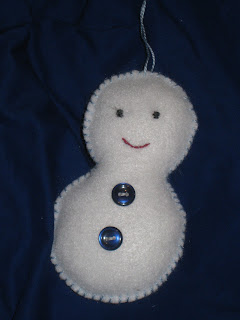 which looks slightly more like a festive bowling pin than a snowman.  I think he needs a scarf of some sort--I mean, how often does one find a bowling pin sporting neck wear?  I'm also thinking of maybe redoing the initial pattern to make his head sit a bit lower and maybe have the bottom be bigger.   One of the lovely things about craft felt is it's so inexpensive that one doesn't feel bad playing around with it, so if it takes me a few tries to get the ornament I want, I'm not bothered.  Maybe the next one can even score a hat of some sort............?