I Swear This Isn't Really THAT Sort Of Blog....

I need five more ornaments!!!!!!!!!!!  You read that right--FIVE.  If I hadn't had an incident with the accidental mating of two ornaments, 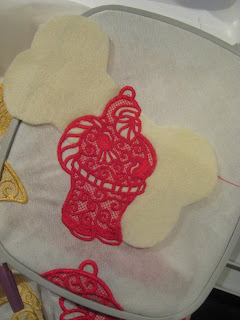 for which there are simply NO clean jokes, I would only need four.  Words simply fail me--which is best as any attempt to describe this is going to get me on some VERY unfortunate searches on Google.  I did manage to make a second G-rated Santa, 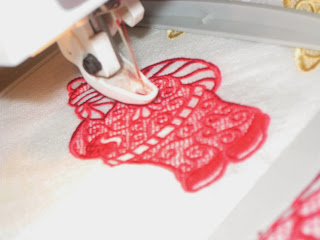 as well as these, 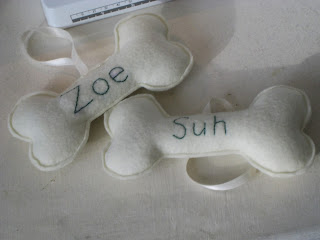 for friends who recently lost a dog and my cousin who adopted one this year.  There is a third in the works, 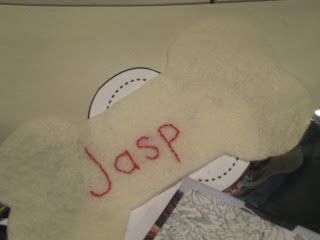 and will be a fourth when I get another piece cut out.  Jeeves is now busy on blue icicles, 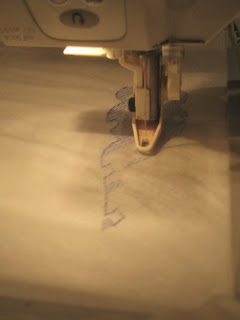 which cannot possibly achieve an R- or even a PG-rating, and I have been doing nice, wholesome things like washing the starch out of the pile of lace ornaments: 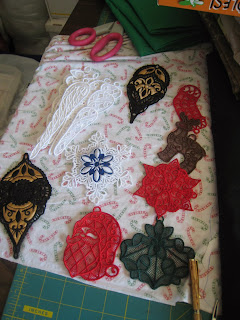 Believe it or not, this has taken a rather elaborate trial-and-error method, resulting in: 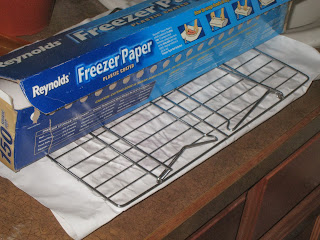 They can't dry on fabric, because the starch sticks.  If left to their own devices, they curl.  The latest batch are sandwiched between two pieces of freezer paper, which in turn are sandwiched between two cookie racks, and the freezer paper itself is keeping it all squashed flat.  This probably wouldn't work so well if there was even the slightest chance I'd be making cookies in the near future, but that's a pretty remote possibility.  From now until at least January 1, there will be a steady flow of holiday cookies INTO the house, and as I don't really like them and Andy will be up to his eyeballs in them, there's no reason for me to go to the effort.  Besides, the cookie cutters are all in the sewing room as well, so it's easiest (and healthiest) to just stick with the felt ones anyway...........