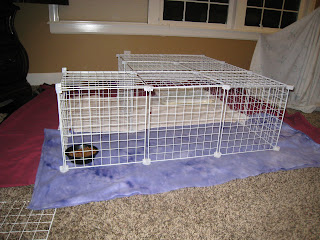 Well, it does keep Theo confined, but it stresses him out and he spent the night howling, pacing, and flinging himself around. I know he has a cast on, but I think the "quiet" part is probably the more important goal, so we finally let him out of the cage in sheer desperation & I spent the day keeping Theo from jumping onto the bed and the sink.

The cast is quite festive: 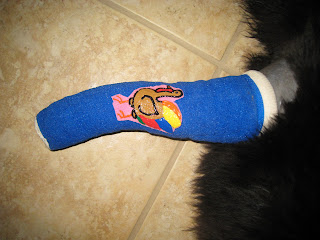 but in the relative scale of things, it stretches out his back leg entirely, making the leg just about the length of the rest of the body: 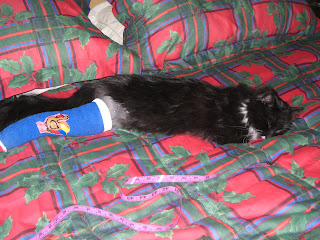 He's a pretty sorry-looking camper all the way around, because he also has this horrible new poodle-do: 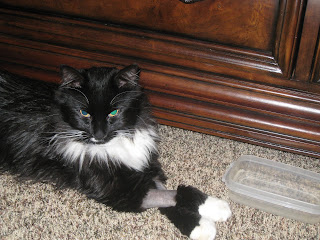 where they attached his I.V.s. To add insult to injury, I have to saran-wrap his cast before he can use the litter box, and then I have to hold him up or else he just keeps turning somersaults in the litter box. I don't know--maybe I should just knit him a little elf suit and complete the total cat humiliation program we have going on here. 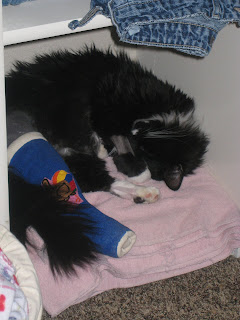 and another on the bathroom mat: 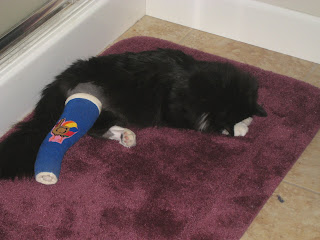 but he really isn't as groggy as I had hoped he would be. We have 10 days of this cast, then I really hope we get something a bit smaller. He'll be in casts for 6 weeks. Heaven help us. 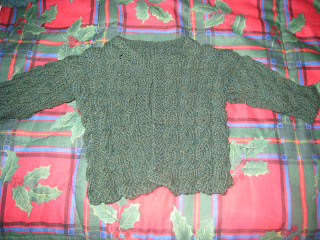 And you can tell how my week has been when I say that finishing the sweater was a bit anti-climactic after figuring out a way to help Theo remain upright long enough to pee.