So I have a little app on my phone that I use to track how long it has been since I last bought yarn and fabric.  Yesterday  I saw my yarn counter was at 999, so excited and, frankly, amazed that today would be day 1000 since last buying yarn, I opened it up to see....999.  (Fabric, BTW, is at 16--I'm struggling a bit on that front.)  So, my counter can't go any farther.  I do at least know that July 15 will be 3 years on the sheep, but I think I need a new counter as I don't think a once-a-year anniversary is strong enough to help me cling to my sheep.  I need incentives!  Preferably ones that don't include buying things.  'Cause I have fabric for that.

This weekend I've been doing our taxes (ICK), but I rewarded myself with sewing breaks, so 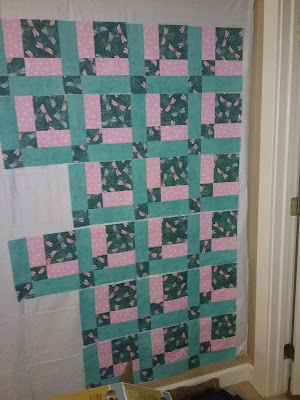 the new quilt is progressing.  There were indeed two nights this week when I could pop up and sew the pinned pieces, and I even amazed myself by ironing and pinning the next pieces together before stopping for the evening.   This is a great project for after work as it's pretty simple and no fussy bits--or at least not yet.  We've become a bit obsessed by dragonflies since moving to the new house as there are several of them that live near the pond in our yard, and so we spent many evenings watching the dragonflies last summer, so it's become the theme for the house.  One of the themes.  Humans bullied by demanding cats is another predominant theme around here.
Posted by Toni at 12:01 PM 3 comments:

You might have guessed by now that I am spending a lot less time crafting.  The new job often wears me out entirely, so I come home many nights and retreat to the heating pad. This would allow for quite a bit of knitting were it not for two string-crazed kittens who are determined to "help."

But over the weekend I cut out fabric for a spring throw for us, and my new plan is to leave everything ready to go so when I have a few minutes, I can pop up to the sewing room and start sewing.  I got one stack sewn, ironed, and repinned last night, and I am ready if I have time tonight. It's a fairly simple pattern with 10 inch blocks (where have these been all my life?), so I'm hoping it goes rather quickly. 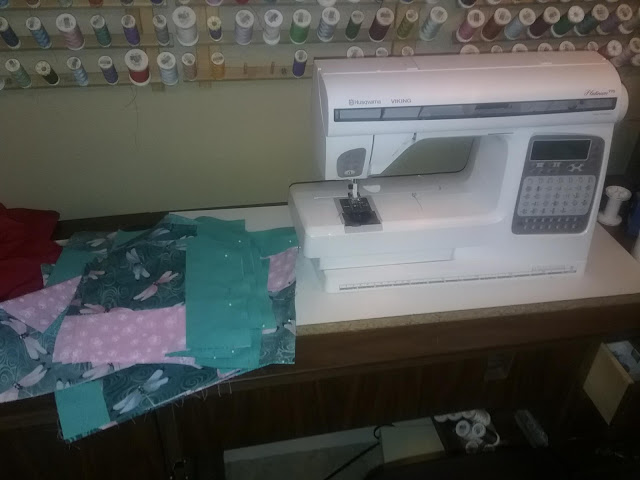