Kitty Life Is Much More Stressful Than I Thought

My little sidekick seems to have gotten back to his usual self, 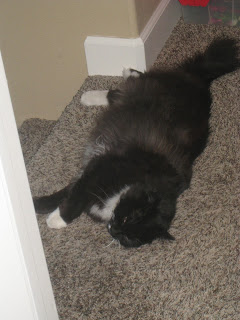 including one of his favorite games, which we refer to as "trip the human."  He's still on a de-stress medication and the glucosamine blend for bladder health, but the longer he can go without a relapse, the more likely it is that it won't reoccur.  So I keep a close eye on him, but it's harder than one thinks to de-stress a cat.

Monday I had warned him that this 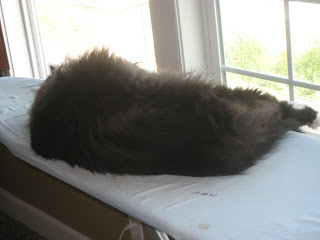 was a bad place for a nap.  But you know pets--you can talk until you're blue in the face and they just won't listen.  So Tuesday, he fell off.  He did actually land on his feet, which I thought was just an old wives' tale, but I wasn't sure if it was stressful for him or not.  If I fell 3-feet out of bed while asleep, I don't think MY stress level would be great, so we had an extra petting session.  All seemed fine and then..

Wednesday, he got locked in the garage.

Not realizing how much we would regret it, when we first moved into the house we installed cat doors in the kitchen and garage doors so the cats could come and go freely.  Two years of nocturnal bedroom gift adventures was put to an end with Theo's broken leg, and the cats are locked in at night.  Calisto, our little Houdini kitty, can unlock the cat doors, so we have a big sliding panel with screws for the outside door that finally stumped her, but they can get into the garage at night.

The problem is, the lock on the cat door wears loose, and can sometimes just end up on locked, in-only, or out-only.  Tuesday morning, Andy was amazed (and, frankly, delighted) to not get Theo's regular 5:00 AM wake-up call.   Sensing trouble, I went looking, only to find a very irate Theo trapped in the garage by "out only."  Not sure if "angry" and "stressed" are related in kitty world, I groveled a lot, gave Theo his medication, and crossed my fingers.  A bad week, but so far, so good.

Thursday night, we had thunderstorms.

No matter how often we get them, thunderstorms terrify the cats.  For Calisto, it's either under the bed or buried in my closet--to possibly not come out for a day or two.  For Theo, for reasons best known to himself, it's the pantry.  As soon as the lightning started, I went rushing downstairs to make sure the pantry doors were partially open just like he likes them, and sure enough--he was already there.  Just to make sure he was perfectly comfortable, I moved some green beans out of his way.

He still seems to be doing okay, but I'm checking the litter boxes regularly just to make sure.  I had no idea how much stress was involved in a kitty's life in a week!  No wonder he's on drugs..........I think I could use some just trying to keep HIS stress level down!