So today is my birthday, and it's only a true amateur who celebrates for a DAY.  Last night we met my parents for dinner in the town halfway between us, today we went to Art in the Park and out to lunch to celebrate, and two weeks ago our New Recipe Dinner Club had Italian Movie Night 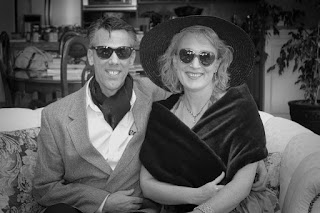 (Yay!  An excuse for costumes!)  to celebrate the 3 out of 6 of us who have birthdays in September (which says a lot about January in Idaho, I guess).  Oh yeah--two weeks of birthday....now two months at the gym and everything should be back to normal. :)

Andy and I might have taken a slight detour to hit the fabric store before dinner last night.  You know, my stash does fairly well in the Witness Protection Program.  I want to make a silky print long-sleeved shirt for fall, so I bought this last night 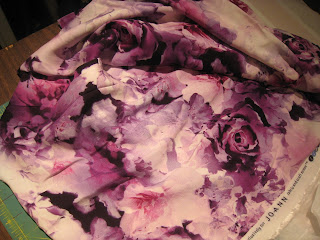 and a fabric glue stick and nothing else.  In a fabric store!!!!!  Labor Day weekend I was a bit sore so I had Andy drive me to one of the local ones to get fabric for a fleece pullover for a friend who is about to undergo surgery.  Our friend borrowed the one I had made Andy years ago, and just raved about how much he loved it, so we thought it would be the perfect gift.  That time I bought the fabric, had Andy pick out two sets of buttons that he liked since he was with me, and nothing else.  Our new system is boring the socks off of Andy, but it's saving me a LOT of money.

I think it was a couple years ago in one of the challenges I hosted on Ravelry that I had members box up some of their yarn to set aside for their birthday the following year.  It's a stashdown group, and the whole purpose is to use the yarn one HAS instead of buying new yarn, but the problem with new yarn is it's WAY more exciting than existing yarn.  So the idea of the boxes was to make a project exciting again.  So this morning after breakfast, I dug down my box 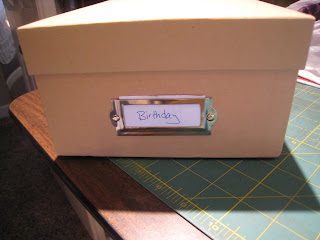 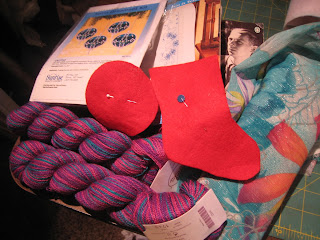 lace yarn for a shawl, 2 felt ornaments to make, a yard of a chiffon-like fabric, a book, a pair of stamped cross stitch pillowcases AND a beaded ornament kit.  I'm guessing there might have been a bit of caffeine involved when I put this together, don't you?  Maybe I thought it was projects to tide me over until my NEXT birthday.  To be fair, all of this existed in my stash already, but I'm thinking that's a good 4 months of project time right there in that harmless looking little box.  And you guys are my witness to see if ANY of these are finished by NEXT year's birthday.

I had been going to start a new project this evening, but I think I am giving you an accurate picture of my sewing room to say that it was easier to work on the fleece pullover than to find a place to put it in order to start something else.  AND, the Sewing Gods obviously recognize birthdays because I got the collar right in the very first try!!! 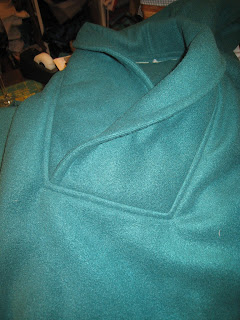 It looks a bit wonky here , but that square edge where the collar joins the body is really tricky.  I had such a hard time with the first one I made that I had to invent swear words because my own vocabulary just wasn't cutting it.  FIRST TRY!!!!!!!!!!!!!  I'm going to see how much I can get done tonight on the pullover, because after THAT, it is entirely possible that the pullover will simply self-destruct tomorrow..........

And I have to show you what Andy made me for my birthday: 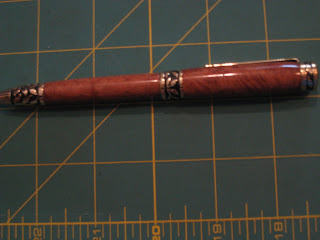 He finished it almost a month EARLY, so you can only imagine how much of a shock that sort of behavior was around here.  We've been pretty pleased to be less than a month LATE, and there's a Valentine gift for me and a birthday gift for Andy both past the 1-year-late mark.  If that's the new standard around here, maybe I should start his 2016 birthday gift tomorrow...........