and pickling
and gardening
and exercise
and socializing

which is why there hasn't been a lot of blogging.  It's so hot here that if I'm walking, I have to get up early to get my loop in--which it turns out is 4 miles rather than the 3.5 that I've been thinking for all these months, so I've not been slow and poky like I thought.  If I'm going to the pool, I go in the afternoon when it's crazy-hot because it's a perfect way too cool off, but that tends to mean I'm exhausted and ready to collapse by 4 every day.  If I could nap, I would have taken one every day this week.  As it is, I was only NOT in bed by 5 today by the great strength of willpower and the fact that with the windows open I didn't want the neighbors to see me in my jammies at 5:00 pm.  Like I'm probably NOT considered the crazy neighbor lady by everyone already--and they haven't even seen my stash!

Speaking of which, this 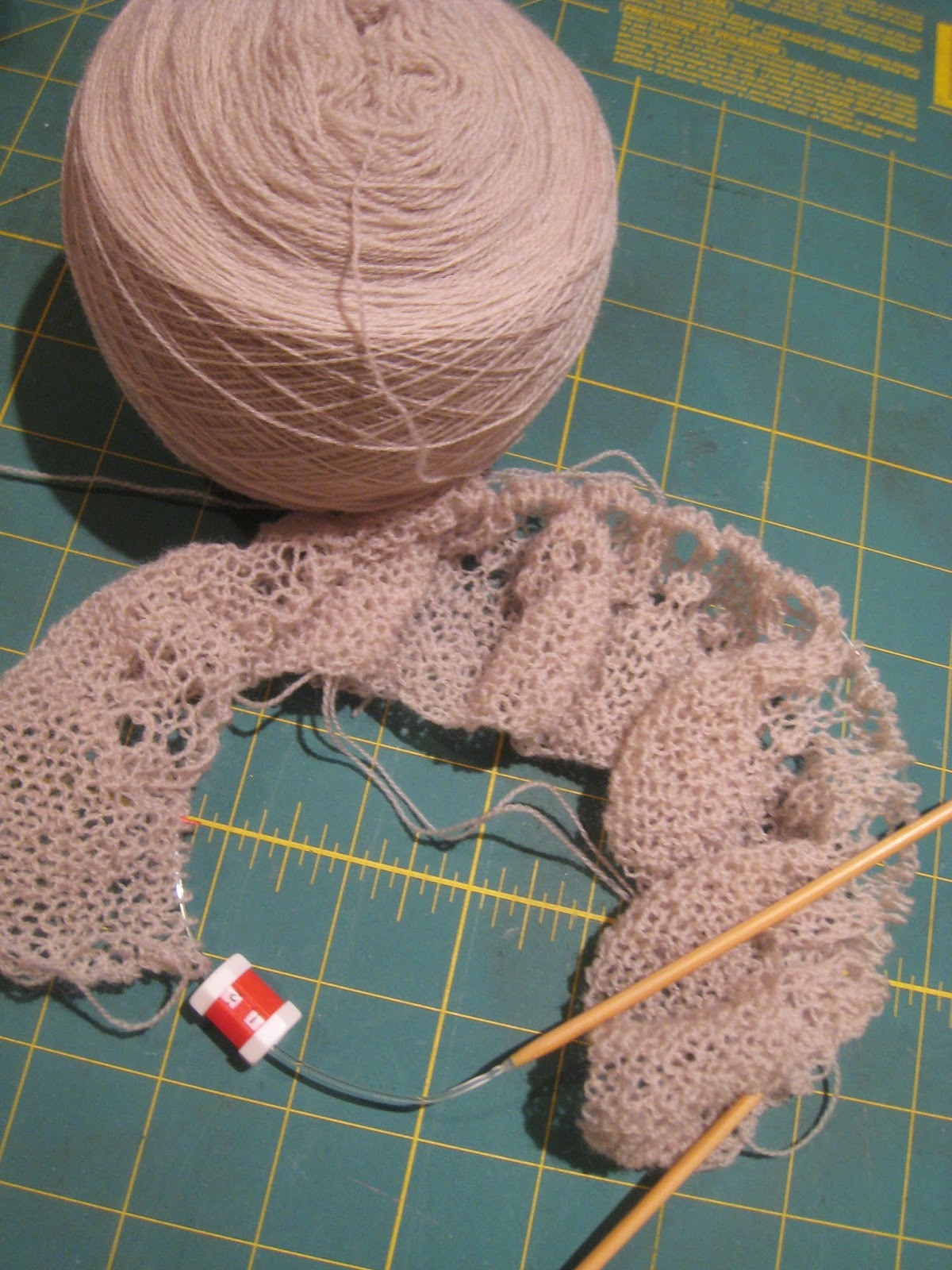 is my new portable knitting project, and it uses 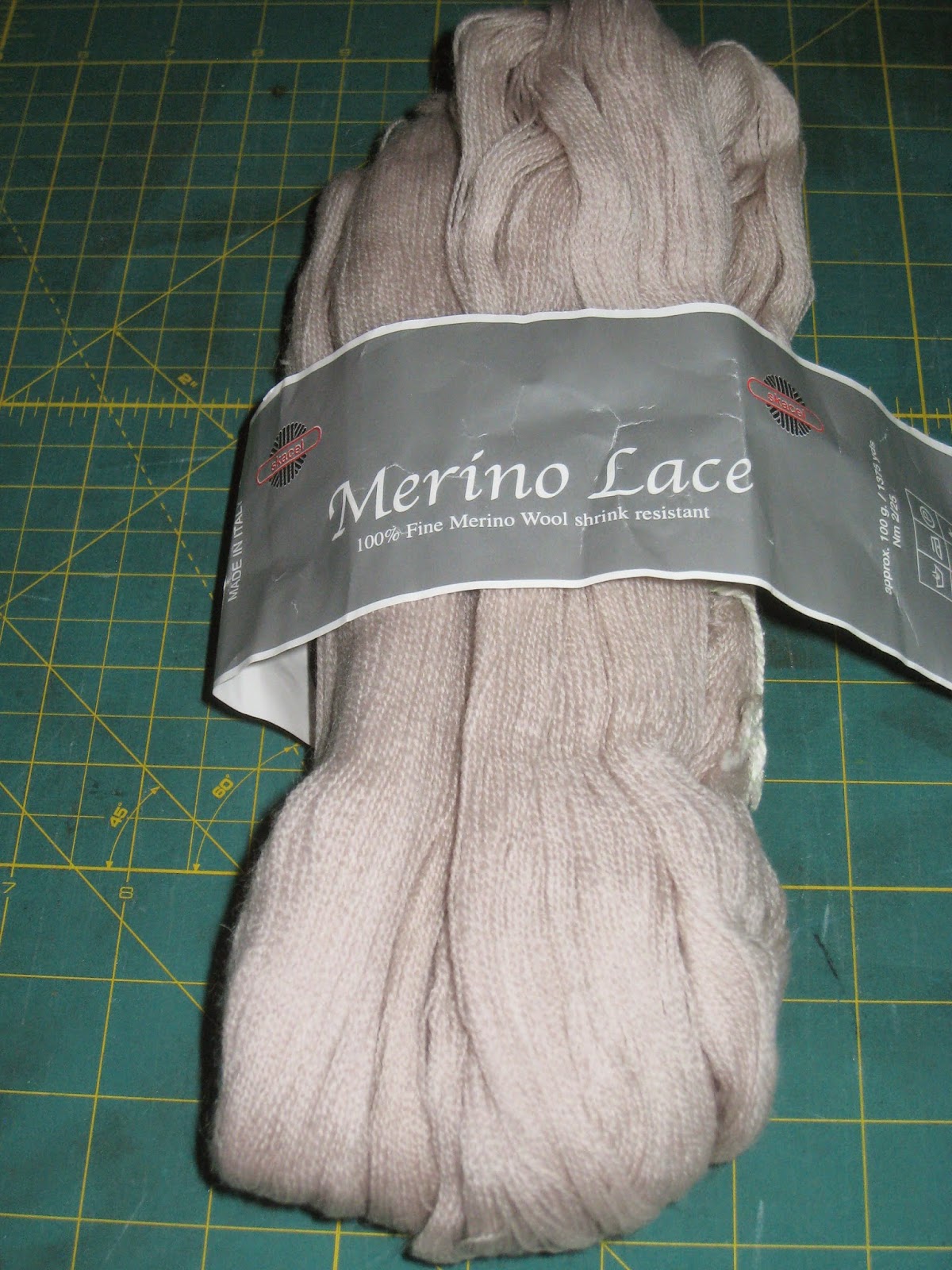 the oldest laceweight in my stash!!!!  It's from 2004 or 2005, and I have quite a bit of this stuff in several colors, but I'm very proud to say that it has been discontinued but I'm using it anyway!  It's a big hank--1375 yards and 100 grams, though unfortunately taking this out of the lace bin made no visible difference at all, but after 10 years in the stash, it's lucky to see the light of day at all.

There has also been sewing.  One table runner is quilted, 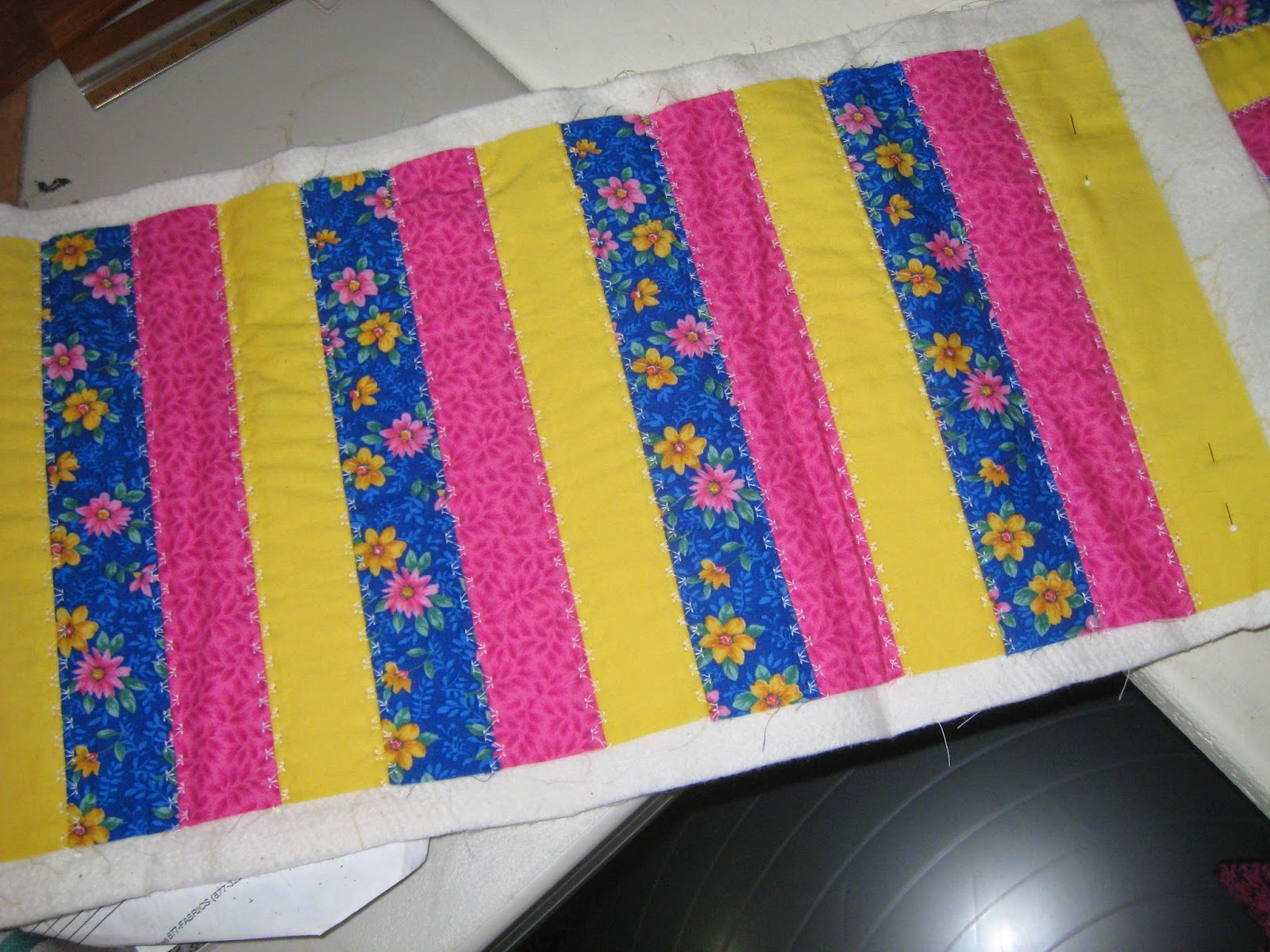 a second is in the process, 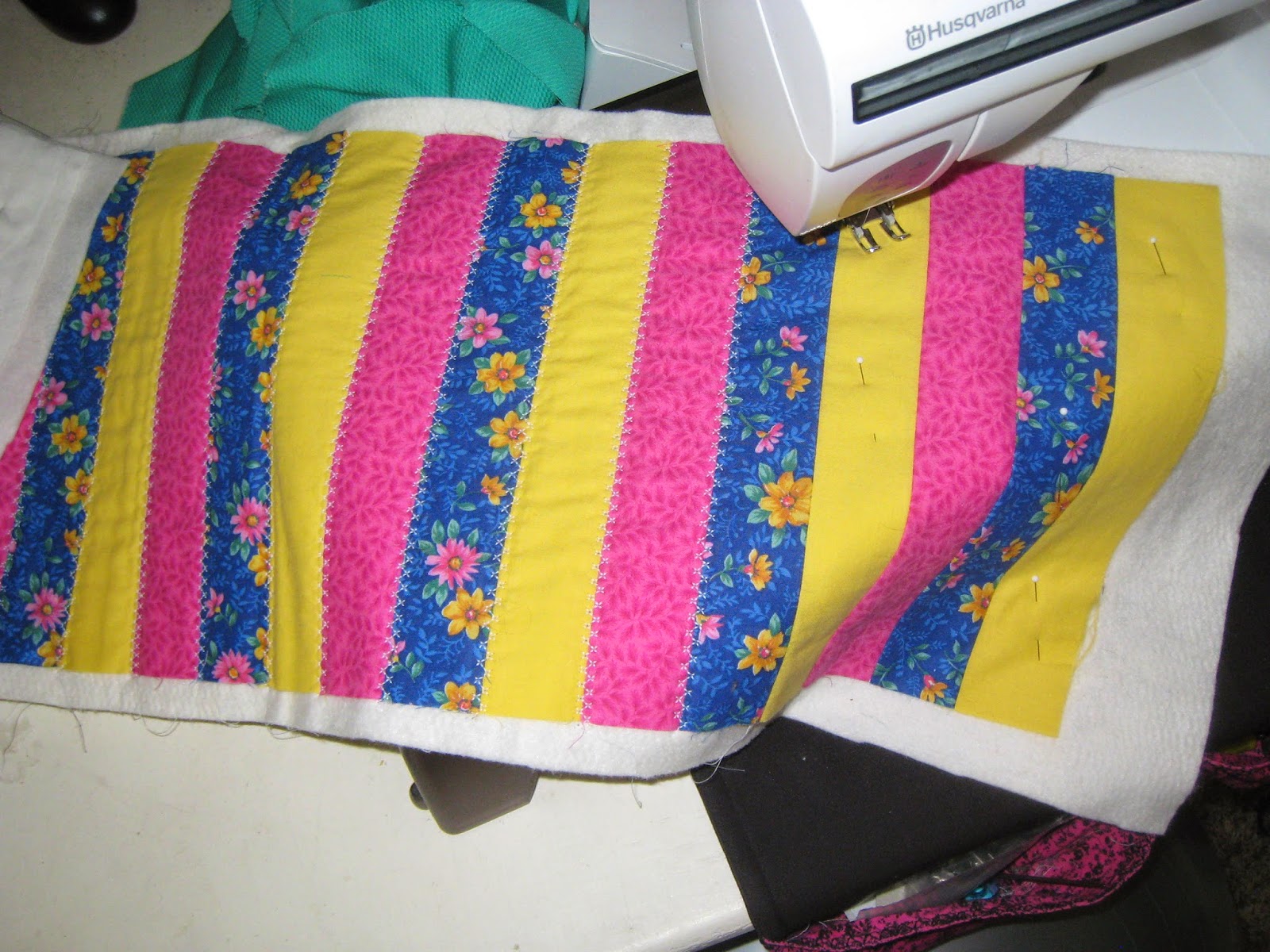 and numbers 3 and 4 are ready to be cut into blocks. 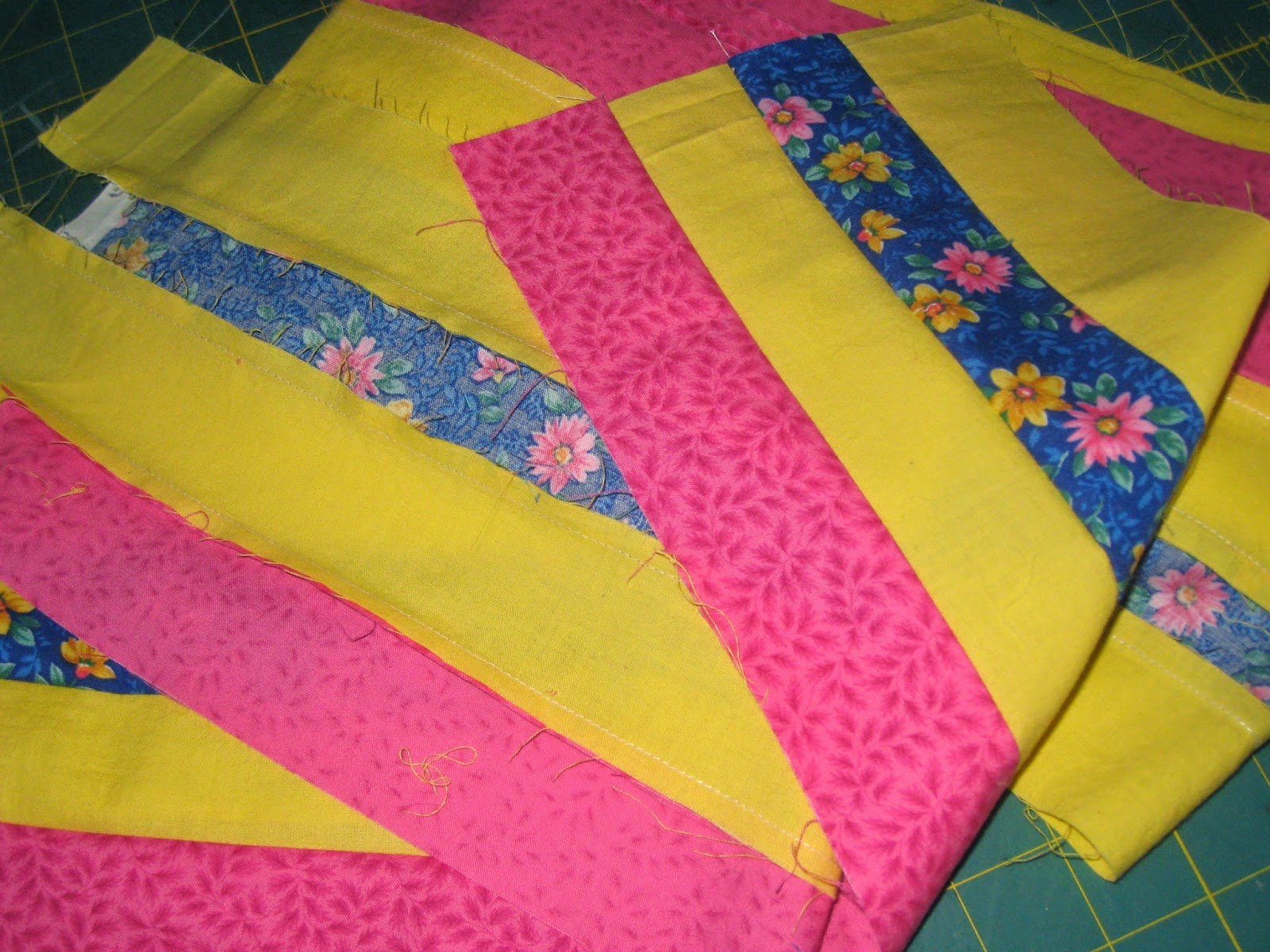 I like the look of the blocks using yellow between each stripe best, but the decorative stitching shows up best in the join between pink and blue stripes, so they each have their charm.  If I get brave, I might try stippling on one of these.   I think I've figured out the problems I was having with the decorative stitching and walking foot, and I like this batting, so I think I might be tackling one of the my quilt-top WIPs later this year--or perhaps in January when I'm not trying to finish 100 projects......

And just because starting projects is so much less helpful than finishing existing ones, 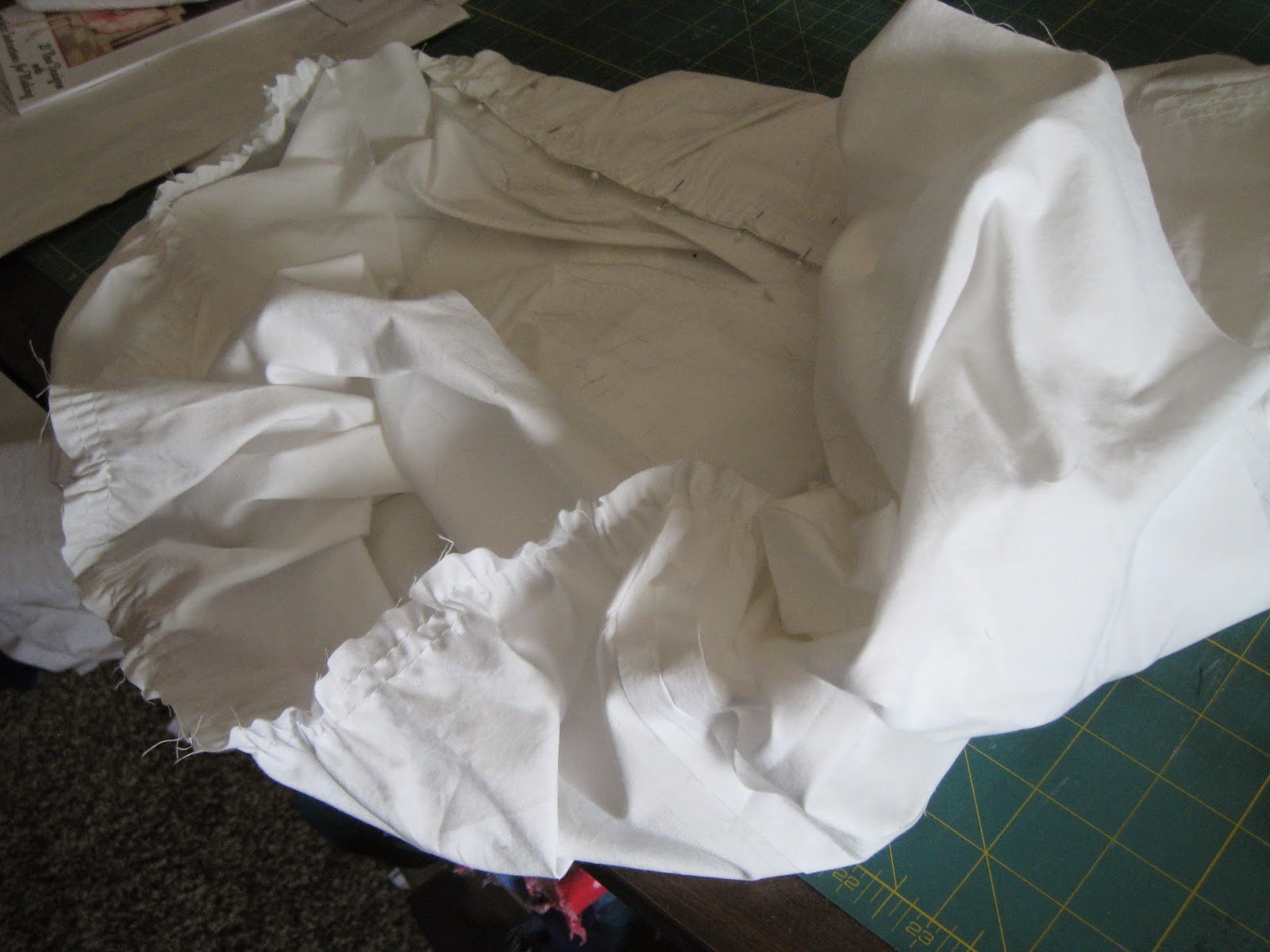 I have YET ANOTHER project.  So because one uses muslin for EVERYTHING in sewing, I buy white muslin by the bolt when it's on sale, which works out really well--except when I have forgotten where in the blazes I put the bolt.  I had to go rummaging for it because I wanted it for the backs of the table runners, and then since I had it, I wanted to try out a patternless tiered skirt pattern I'd run across.  Muslin is perfect, because if it turns out well, it's light and will make a nice summer skirt, and if it doesn't turn out, I'll know where to make adjustments.  Since it is muslin, I'm doubling the top layer so it (hopefully) won't need a slip and could maybe handle a little embroidery of some sort.  Sometimes it's nice to take a break from patterns and just play for a bit.  I think that's why I grew up knitting instead of sewing.  I taught myself how to knit from a book, so there was a lot of "I wonder what would happen..." sort of experimenting.  Sewing, however, I learned through 4-H, and it was as rigid as it could possibly be, and after two years I bailed and didn't go near a sewing machine again for the next 20 years.  Of course, had I actually enjoyed sewing during that first go-round, that could have led to 20 more years of stash accumulation, so maybe things worked out for the best after all.............