Wow!  Was that a fast week for everyone else?  It was here--fast and busy.  Whew!

For Thanksgiving we headed up to my parents' ranch two hours away.  Because it's such a long drive, I've only been there once in the last 3 years, and paid dearly for it later, so it has been a while.  The ranch used to belong to my grandparents and is now a corporation between my mother and her twin sister and their husbands, and is now up for sale, so there's been a great deal of cleaning and sorting.  Since I haven't lived there in over 20 years, anything I wanted of mine I've long since brought home, but I did find an old box that belonged to my grandmother that always had spools and small toys in it when I was a kid.  Some of the spools are wooden, so I brought that and will clean it up.  Originally she used it to carry bottles for the twins when they traveled.  It's just one of those things that is totally worthless but carries fond memories.  My mother gave me these: 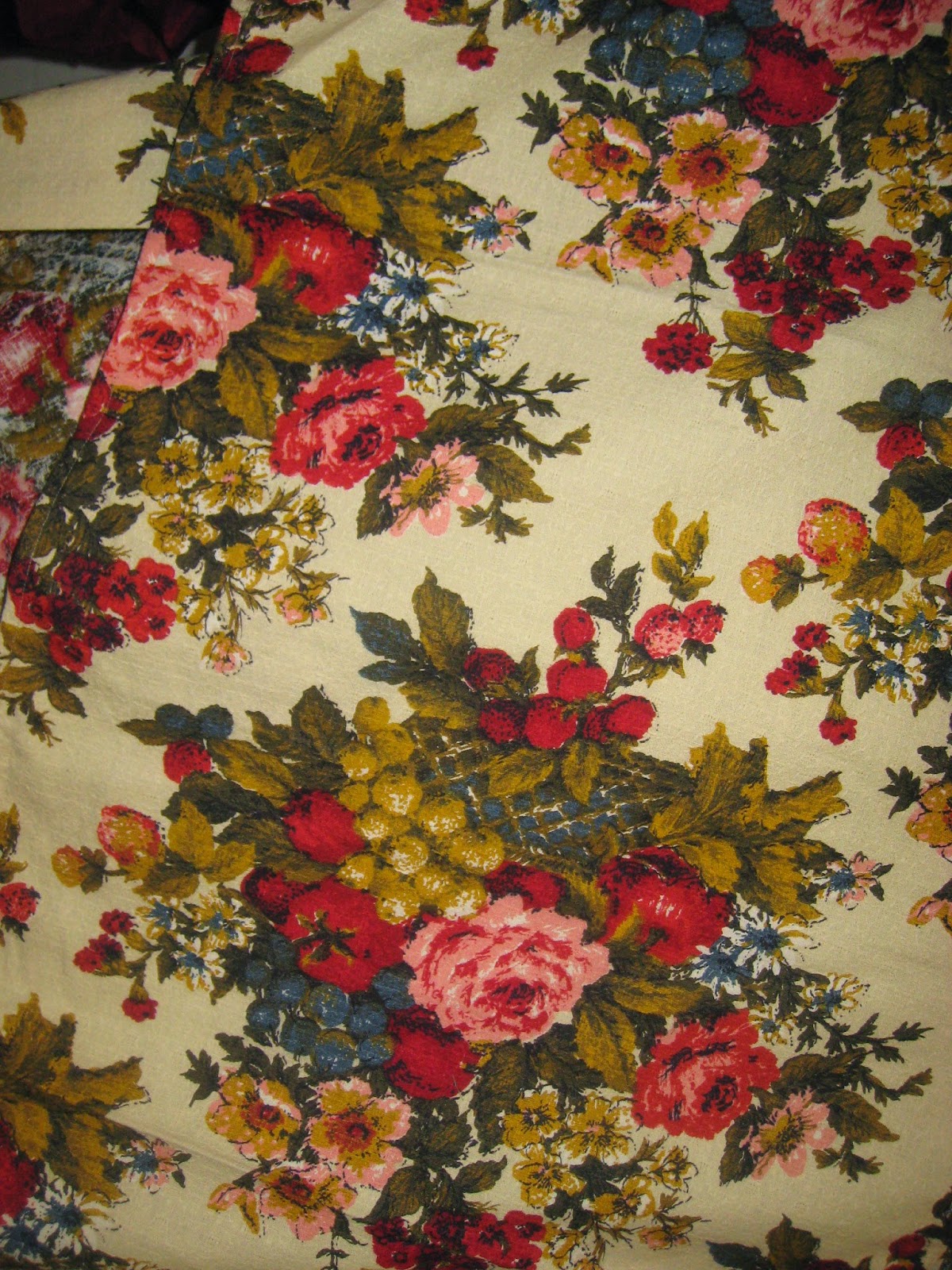 which are two old curtains that were probably never used.  We moved to the ranch when I was 4, and at that time there was a hired man named Bob who lived in the bunkhouse, and had been there much of my mother's childhood.  He had a Dachshund, so my sister and I were immediately drawn to him because the first thing on our agenda was meeting all the "safe" animals on the ranch and what is  more fascinating to a child than a weiner-dog?  He died when I was still pretty little, but he was a nice man, and there's enough fabric for a couple table runners and maybe a nice bag.

We came back Friday, stopping at Joann Fabrics in Ontario for the Black Friday sale.  I'm not sure I've EVER shopped anywhere on Black Friday, but that store on Black Friday is less of a nightmare than the Boise store at any time, and I was hoping to find more of the white tulle (found) and the glittery leaf print (didn't find), I wanted to pick up a bolt of paper-backed fusible webbing while it was 60% off, and I still needed two black prints for the wall hanging pattern I bought in Victoria: 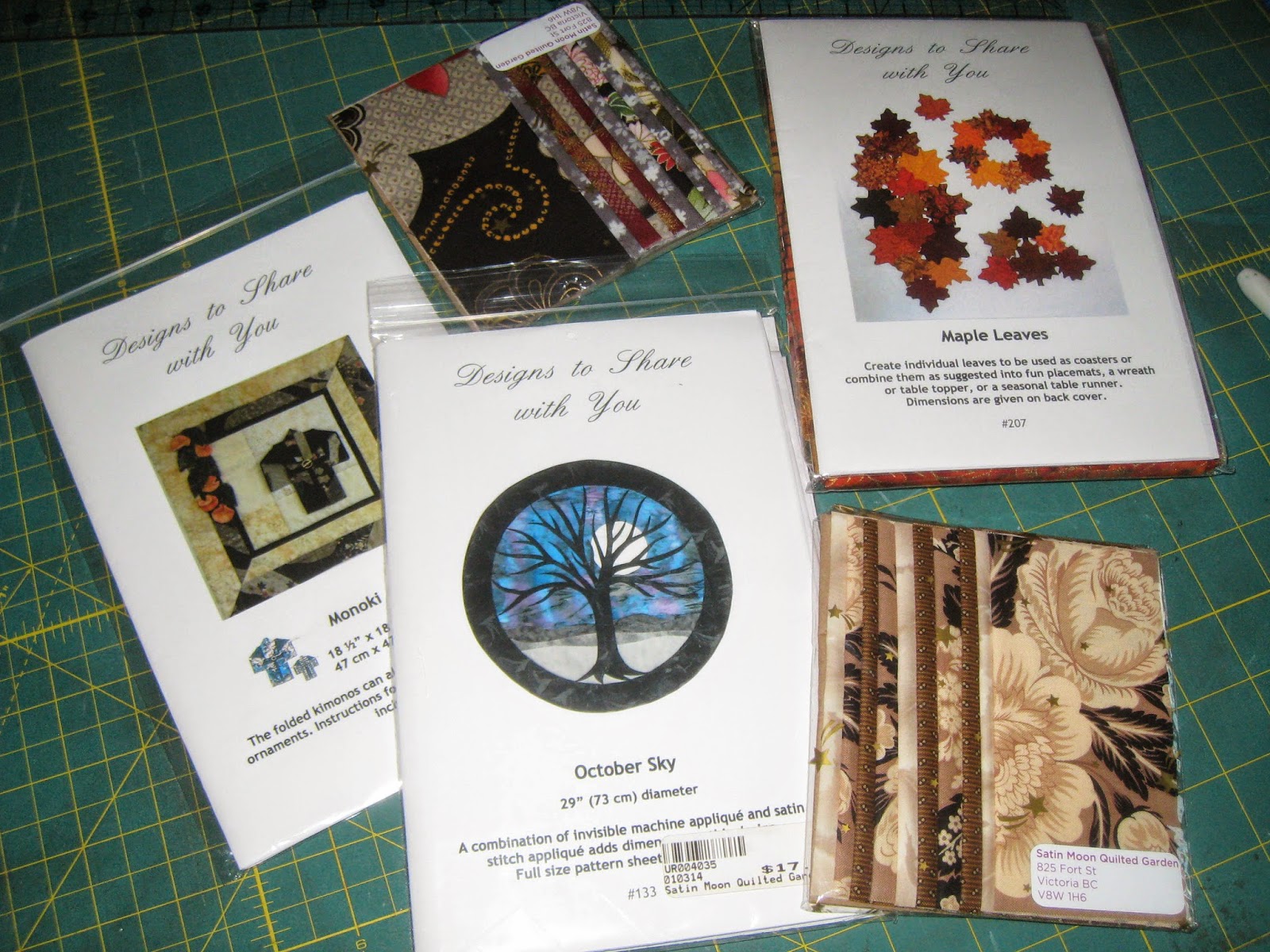 They had THE most beautiful completed one hanging up, and we both really liked it, but ever since then I've been trying to line up pieces and supplies for this thing.  It's more complicated than anything I've ever made, so I'm buying fabric in full yards because I figure some of it is going to end up in the blender.  I think I'll be set to go after the holidays though.  The only thing I might not have by then is muslin because I have almost gone through my stash of it.  I'm going on a crafting buying-ban again on January 1, but rather than scramble at the end of the month, I might make allowances for a new bolt of muslin (seriously a bolt--I use it for everything) when I need it.  Or maybe I'll order one before the end of the year.

There has been a definite increase in the fabric stash this fall, which you can blame squarely on these: 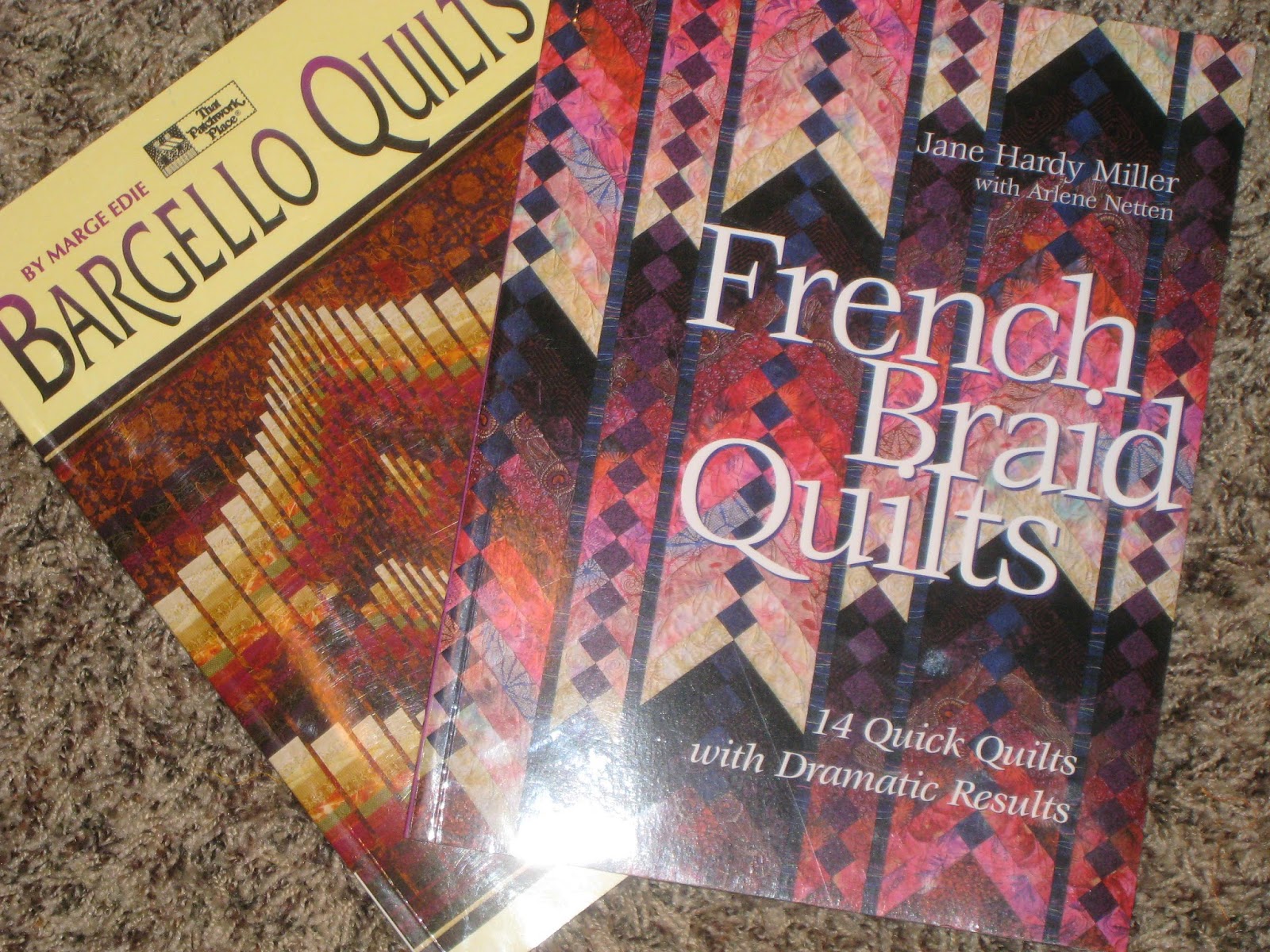 which I bought with some birthday money.  I am fascinated by the color progressions, and have been padding out my fall and Christmas fabric stashes, as they are the only ones even remotely close to having enough colors to be able to do them.  And, in case you were wondering about the sudden obsession with fusible webbing, Andy gave me these for my birthday: 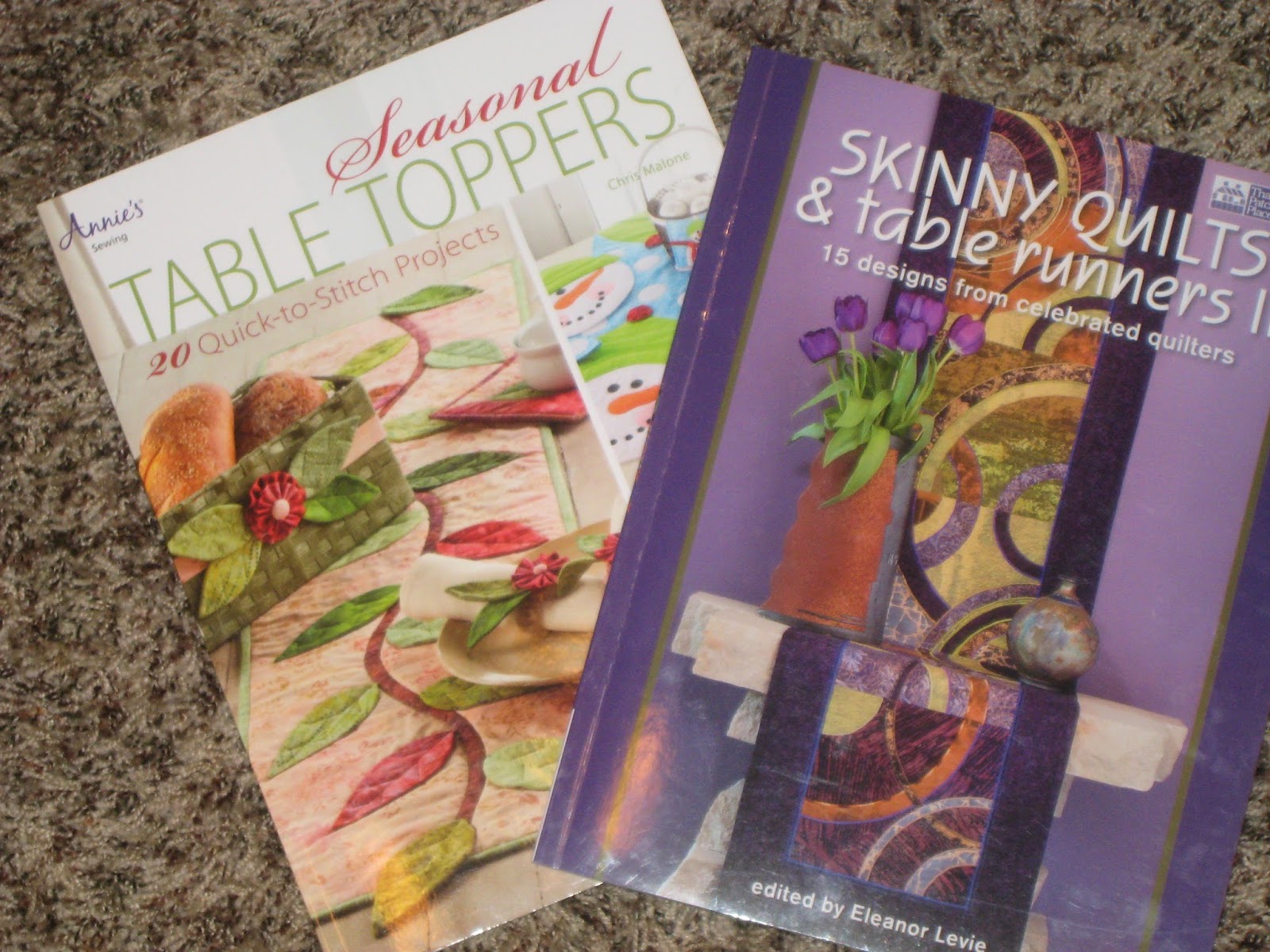 and I pretty much want to make all of them.  I'm sticking with table runners instead of quilts for a while--they're faster, I can learn quilting techniques on them, and I can do them as gifts.  I could do quilts as gifts as well (and have) but the general lag time on them is about 5-10 years so far, so it's not working out well.  I've decided that one either has to shop a lot OR have a large stash for quilting--it's one or the other.  I can live with that.  The fabric for clothes, however, would be a heck of a lot more useful as clothing, so I am currently flirting with the idea of the goal of 115 finished objects and 115 yards of fabric used up for next year.  We'll see........

I'm hoping to finish decorating today, so I'll have pictures soon, but I did have to show you this: 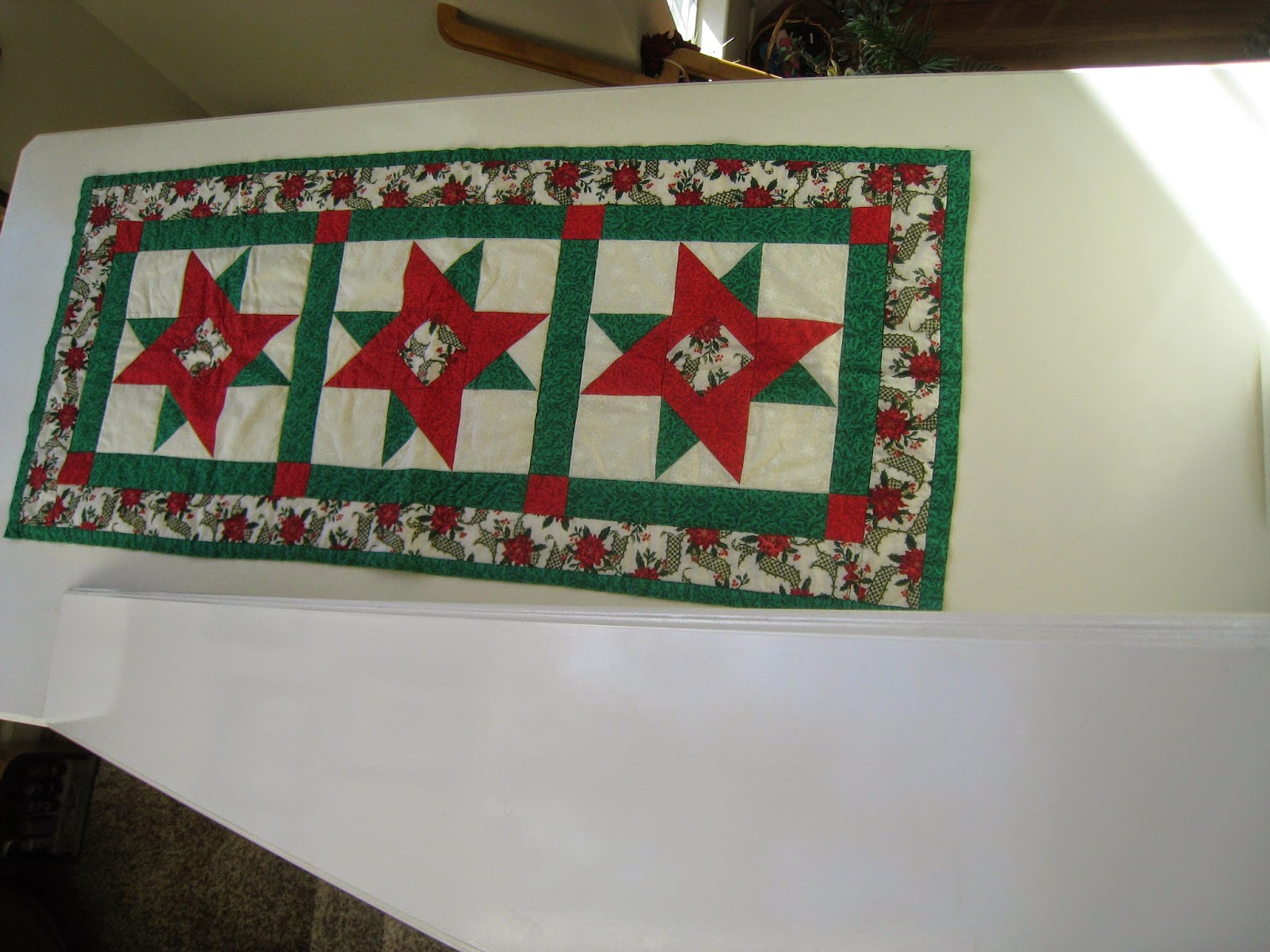 Not only my very first table runner AND my first-ever quilt-type project, it might be the first thing I made after taking up sewing as an adult.  It looks pretty good from a distance.  I didn't actually quilt it, and it's so thin that either I ironed the daylights out of the batting by now or didn't include any.  I have no idea.  I also didn't understand the directions for the binding, so ended up just taking the 2 1/2 inch strips and not folding them, so on the back side I had to iron a quarter-inch hem onto it.  THAT was a long process.  But it was a learning experience, and is looking quite festive on our landing.  And there are a few things on top of it now in case an actual quilter ever got the bright idea to pick it up and check my work..................:)