It's Just the Two Of Us 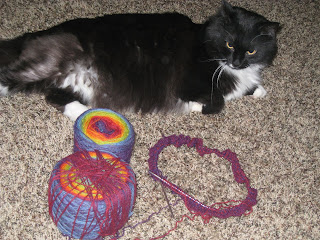 My last attempt looked okay color-wise, but the ribbing was rolling, so this time I'm striping only on every-other row of the ribbing. No idea yet if that will still look striped or if it will stop the ribbing, but I did learn a couple things yesterday:

1. Unless you rip back both yarns simultaneously, the alternate stripes function as double knitting and it can be really hard to figure out what row either one of the colors is on.

2. This might increase frustration, and when one is frogging and realizes that one will have to rip everything out and start over, one might get annoyed enough to pull a little too hard, thus breaking the yarn.

Thank heavens I have other, better behaved knitting projects. The scarf is zipping along 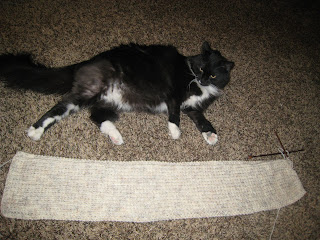 And the first sleeve for the January Aran is almost done! 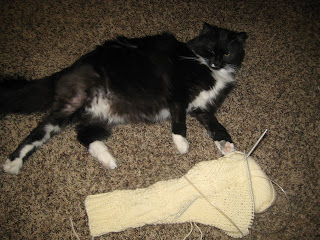 Theo was obviously enjoying playing "Vanna" this morning. You can see the fur on his leg still hasn't completely grown back, but his leg is getting stronger all the time and now he's allowed supervised but leashless visits to the backyard in the early afternoons before the crazy soccermom school traffic begins.

I don't know if Theo realizes he's done with the kitty therapy or not, but he no longer wants anything to do with the purple blanket that always accompanied him to and from the vet clinic, so... 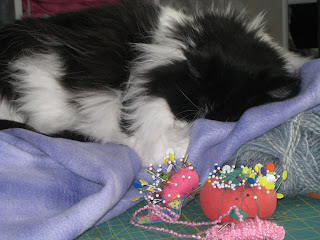