I have finished Andy's Valentine shirt before the end of February! 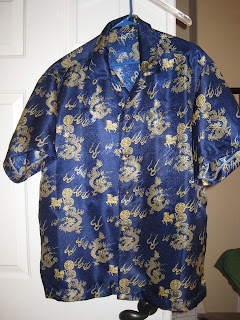 The might-be-lions buttons look nice, and it's washed and in Andy's closet!  I finished the tunic for me earlier in the afternoon, and seem to have forgotten a picture of it.  Oops.  But between them, another 3.625 yards are out of the stash!

The fabric stiffener worked well and washed out perfectly, but it does seem to wear off with handling.  I managed to put a hole in the shirt with my point turner, and there's a part of the tunic where the fabric just separated when I was trying to smooth out a pucker in my serging.  This was pretty old fabric with no information in my notes, so I'm guessing it was pretty inexpensive and might be the fabric equivalent of Fun Fur.  I didn't put a pocket in Andy's shirt.  He does tend to use them, and the first time he put his phone in a pocket on this stuff would probably destroy the shirt.  But it's DONE, looks fun, and it was finished sort of close to Valentine's Day..  28 and a half yards so far.

While I'm trying to let my hip heal from our snowshoeing adventure two weeks ago, I've obviously gotten a LOT of sewing time in.  When it's a bit less grouchy, I'll have other stuff to do, but while I can, I should take advantage of the time, right? 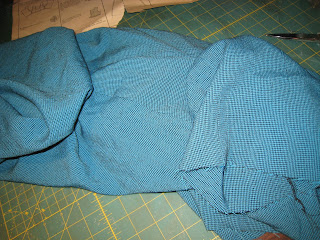 is pressed and ready for some understitching today.  There really isn't much left to do on this dress, except, of course, the zipper.  Normally, I whine a bit about zippers, but after the dragon print fabric, even a zipper on decent fabric seems like an improvement.

I also have these 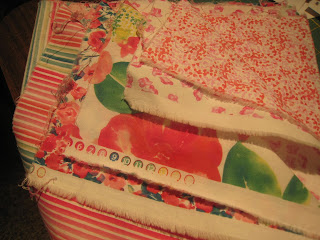 ironed and ready to cut.  It's a fat quarter set I bought on clearance (sucker!), and the first set I've ever encountered that wasn't completely wonky.  I think it was called summer something, but I think it looks more like spring, and I think I'm going to try my hand at bargello with this for a runner for our stairway shelf.  I change the decorations for every season (usually) 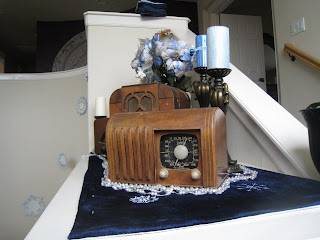 and it looks less sterile when I have a runner for the shelf.  I made this one for winter, and have one done for fall, and a small one that doesn't quite work for Christmas, but spring and summer could use some color.  When we bought this house, it was all off-white everywhere, and while some people like it for it's "clean" look, I find it mind-numbingly boring.  Much of the house has crown molding, but it wasn't that noticeable because it was the same color as the walls.  We've repainted most everything else, but the entryway is huge and will involve scaffolding, so we haven't gotten to that.  Instead, I add color wherever I can.  I think the pink floral prints will look good here--or at least better than white-on-white-on-white.  AND it would use up fabric bought as an impulse buy that will otherwise just languish in the stash.  Plus, I can't decide which clothing project to start next.  SO. MANY. CHOICES......