Remember when I could just pump out embroidered towels like they were nothing?  Well, today was not one of those days.

Needing four more towels and enjoying a day that didn't involve the heating pad, I dug out several towels from my stash, and almost thought my spending ban was in trouble.  The "reader" that copies designs onto cards that can then be inserted into my embroidery machine wasn't reading the card.  As everything else I have from Husqvarna has had issues, I was worried that the reader had now reached the end of it's life cycle (because while accessories are wildly expensive, Husqvarna generally carries pathetic 90-day warranties on them).  Again and again I tried, rebooting my computer twice.  I finally pulled the card out, carefully wiped it off, blew gently into the reader, and turned it upside down in case I missed any lint, and that finally got it to work.  Notice that at no time did it occur to me to contact Husqvarna to ask for help--we all know how that has worked for me in the past.  The reassuring thing is that my little box has a "Made in Sweden" sticker on it, so that makes me a little less nervous.  Most of what I own predates their move of production to China, so I made the "non-crap" cutoff at least.  But for about two hours I wondered if I was going to have to find a loophole to stalk Ebay to find a replacement for the reader, as my machine can't embroider without it.

Once I finally got the designs transferred, I first managed to not click the hoop into place correctly after some readjustments, which led to this: 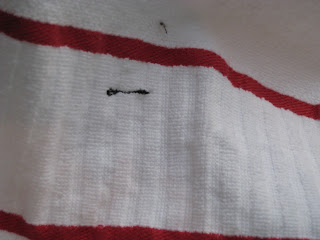 Deciding that an embroidered towel where only one side looked good would still be okay for a towel that we kept, I hooped the other side of the towel and started again.  Now this would have been a great time to remember that I had stopped using this clear plastic-like water-soluble stabilizer on the top of towels because it doesn't work very well......BUT NO! 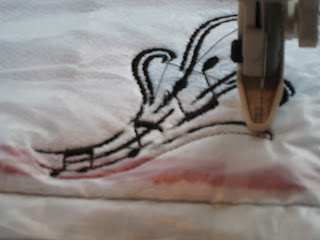 The little spot that looks like the swirl is furry is where I had a hiccup where the plastic stabilizer ripped and the foot went under instead of over, and I had to start over.  But hey, if we can have an error on one side, we can have a bit of fur on the other, right?

Well, why not?  Because next (and this finally wasn't actually my fault), it created TWO big snarls when I tried to embroider the "s," finally causing so much damage to the towel that we now have a towel that reads 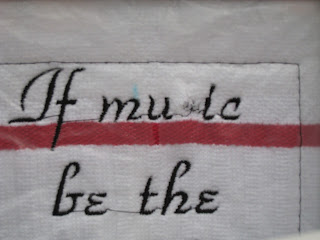 "If mu(hole)ic be the food of love, play on."  But at least we have a towel that I won't mind if it's actually USED as a towel, so there is that.  And, crappy, hole-enriched and furry towel that it may be, it counts for one of my 12 embroidered towels for the year, so now I only need 3 more.  Heaven help me!

After such a fiasco, I decided I needed a little "treat" (especially since martinis are currently off-limits because of the meds), so I decided to try one of the new ornament designs I bought for next year: 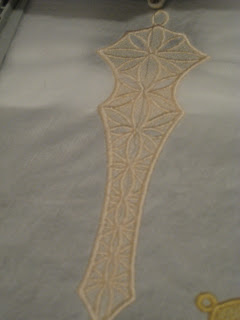 I am in love!!!!!!  Pure white might have been a better choice than ivory, but I wanted to make sure the pattern shown through on this one.  I've looked at this design pack for about 3 years, and decided to splurge a bit to get ready for next year (especially if it wasn't yarn), and bought some icicles and ornament covers.  I was going to save them all as a treat for myself to start the new year, but I want to attempt another towel tomorrow and frankly, needed some bribery.

While the machine was pumping out the nice little ornament, the beaded lace scarf got some attention: 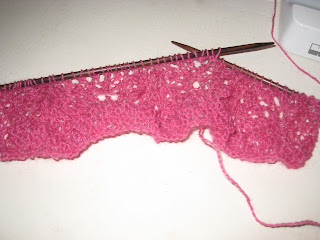