Finding out one might have a 12-year supply of yarn can be pretty darn motivating, it turns out.  We now have a new Christmas ornament 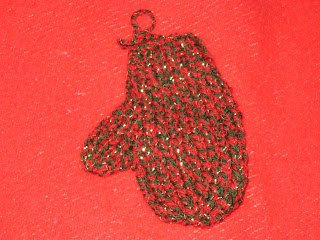 from newly discovered yarn that I'm actually pretty excited to have found as I haven't seen anything quite like this being currently sold.  (Warning:  there may be many pathetic attempts made on this blog to present the Great Yarn Stash as a good thing.)

There are also two new washcloths, 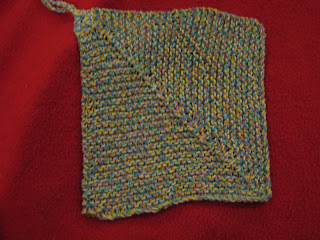 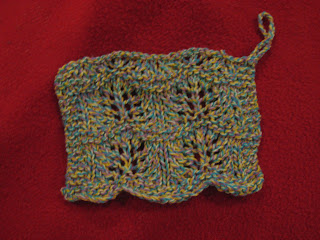 or rather one and as much of a second as I could get out of the last of the yarn.   That finishes up a 603-yard ball of yarn I bought just over a year ago, which gives me 57 items in the "all used up" tab and gives me a little boost in the yardage tally.  I'd been trying to guess how much yarn each of the dishcloths and tribbles was using up, but I was obviously wrong unless one of these two washcloths involved 200 yards of yarn, so I got to make an adjustment.  Yay!!!

In celebration (and to make sure I could be knitting while reading), I started another scarf 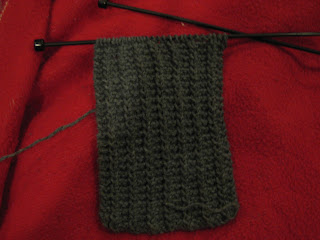 with some of the newly discovered yarn.  I'm trying to finish up the fronts of the new sweater at least to the end of the current yarn balls by the end of February, but they involve cables, and it is going a bit slower now, so I sometimes need breaks.  So, a new scarf in worsted on size 8 needles.  The thought has crossed my mind that if I work with BIG needles and biggish yarns this year, I could knock a year and 3 month's stash off of my spreadsheet......Maybe I only have a ten year supply of yarn after all.................