Today is the first of the month, so it's time for a Project of the Month bag.  This month we have...... 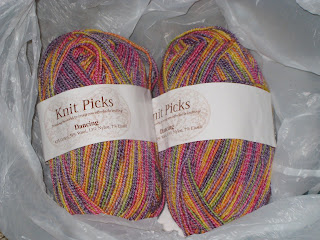 socks! Specifically, Monkey socks.  I'm hoping the pattern helps cope with the stretchiness of the yarn.  It's 7% elastic, which in the sock world means that sock & foot are likely to part company after a few hours of wear.  Apparently no one else had better luck with this yarn as it has now been discontinued, but I think there are still 4 more skeins of the stuff in my stash after this.  If this sock pattern doesn't  help, I'll use the remaining skeins for baby hats, since even if the hats are just as obnoxious as the socks, babies aren't going to complain--or at least not to me.

My little sidekick was a bit sulky when I first came back from my trip, but since he forgave me, we've been inseparable.  Yesterday we cut out more mittens 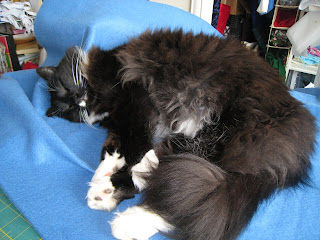 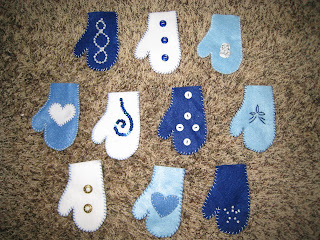 and while 10 finished mittens maybe isn't that impressive, we have quite a stack now cut out 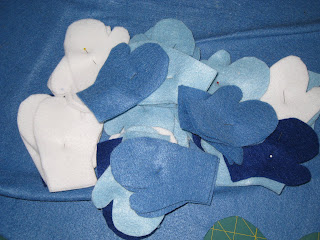 Now a SMART person would have come up with a project that one could declare as "finished" after 3 or 4 mittens, or even after finishing one as a Christmas ornament 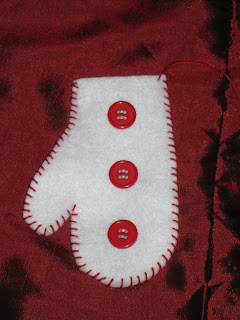 but as usual, I opted for a different route.  I want a mitten garland which I think will require 50 to 100 of the things.  Yeah--that seemed like a good idea at the time.

In need of a faster project--and coincidentally needing a birthday gift for a friend's birthday on MONDAY, my sidekick and I are working on a bag today--Theo's part being to make cutting the material out difficult 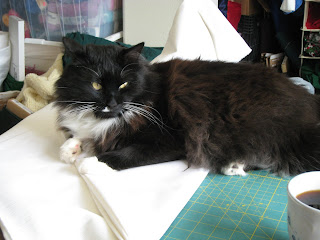 then to hold the pieces hostage 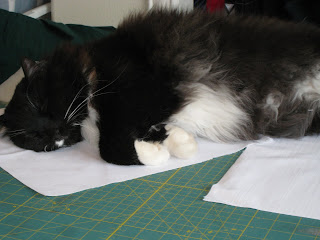 while I try to work around him.  While he was "helping me," I decided to finish weaving in some ends on the striped sweater 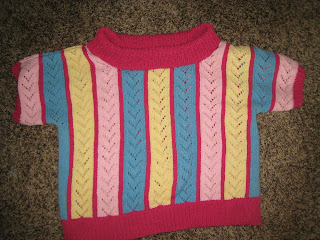 then embroider a towel 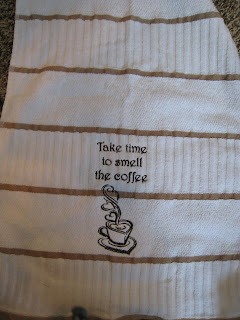 then finally distract him with a second project 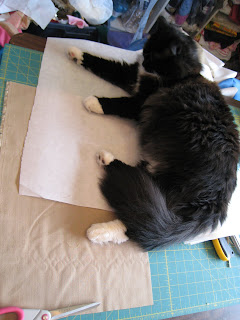 before I could finish the front of the bag. 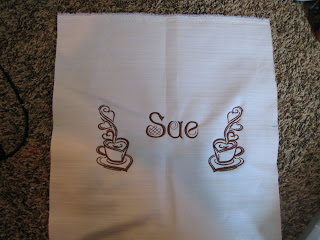 It isn't a finished project yet because I usually try to do a few embroidery projects whenever I change the machine over--and, of course, it took all day just to get this far with Theo's "help"-- but I should be able to finish it up tomorrow--with or without Theo's help.  And if he DOES try to help me, I can always cast on those socks.......

Labels: 100 projects in a year, Project A Month Club, theo

Okay--there was a fabric "incident" a few days ago.  Actually, two separate fabric "incidents."  The good news is, I'm already using one of the new fabric acquisitions.  The bad news is, I don't think using up a whopping 1/4 yard of fabric really impacts the significantly more than 1/4 yards of fabric I purchased.  BUT I DIDN'T BUY MORE YARN!!!  That's something at least.

On the positive note, what I actually used up in April amounts to:

So, the stash totals for the year so far are: