And The June Project of the Month Is..... 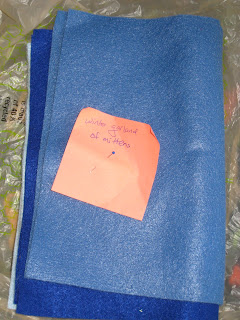 The mitten garland--you know, the one I started about a month ago?

When I originally got the idea, I was thinking really LITTLE mittens, so I bought little squares of felt.  Then when I realized that that would mean working with itty bitty mittens and cutting out itty bitty mittens, I thought bigger would be better.  I knew I had used it as a Project of the Month bag, but I couldn't find it when I decided to start the project, and knowing I would need more felt, I bought more and jumped in. HOWEVER, I have decided that it can still qualify as a Project of the Month anyway because it isn't exactly finished, so I'm setting a goal to do 30 mittens in June--one a day.  And as of June 2, I have done.....zero.  I think it's going to be one of those "averages out" things.......