Friday we had a truly delightful evening with two of our favorite people, then Saturday morning we decided to go out and about to look for an inexpensive desk for me to use in our back bedroom, which we are hoping to convert into a library/guest overflow/office for me and is currently a junk/boxes/disaster area.  Eventually, Andy will build some permanent furniture in there, but we had run across a fairly decent desk for $50 at a charity shop that had just been sold, and 7 years is a long time to not have a desk with drawers.  So it was such a novelty to be OUT and it gave us the chance to meet up with another one of our favorite people for lunch, so we ended up being out most of Saturday and had a wonderful time.  Being in the car was the hardest part of the week, and when we got home I still went for a walk around the neighborhood to loosen up the muscles, but mostly I was just exhausted.  Yesterday I went for another 3.5 mile walk, though a bit faster than last week because there was a REALLY cold wind going, and while it felt good, it did pretty much take whatever I had left, so there was a lot of resting yesterday.  I'd had to rest much of Thursday as well, but it wasn't as depressing as I thought it might be.  Resting because one is simply worn out is a very different thing than resting because one can't DO anything, and on Thursday it was pretty much everything EXCEPT my back that was worn out, so while I was tired, I wasn't depressed.  I'm still a bit restless, but I did get threads 2 and 3 done on the never-ending cross stitch: 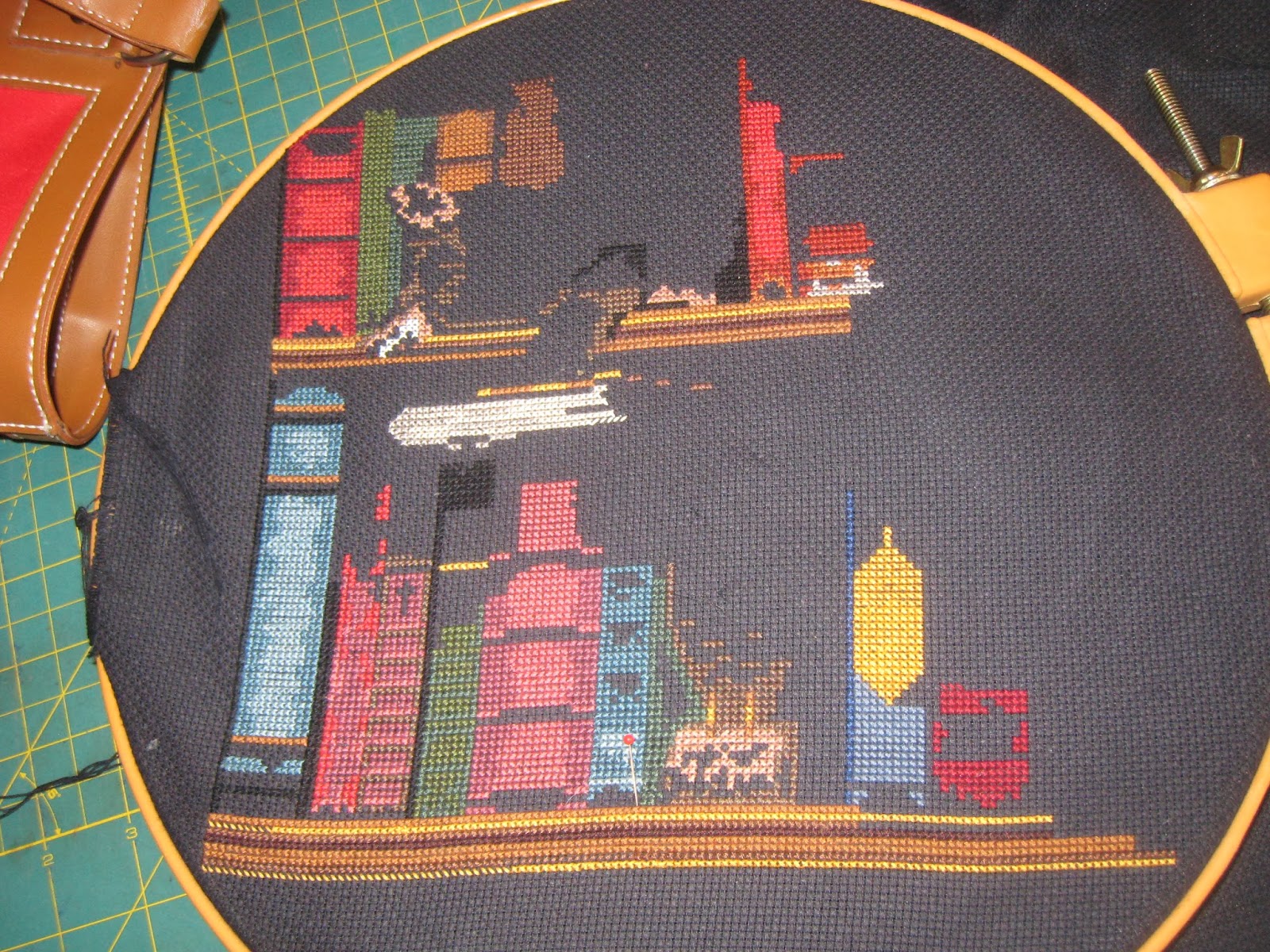 and in a few years I might be willing to figure out how long it will take to finish doing 12 threads a year.  I'm thinking it's probably a good thing that longevity runs in my family......

Yesterday my back was actually sore and I was nauseous most of the afternoon, which now happens automatically when my back hurts, whether as a learned response from the accompanying drugs or because it's a natural response to pain, so I spent most of the afternoon in bed.  There was finally some knitting, 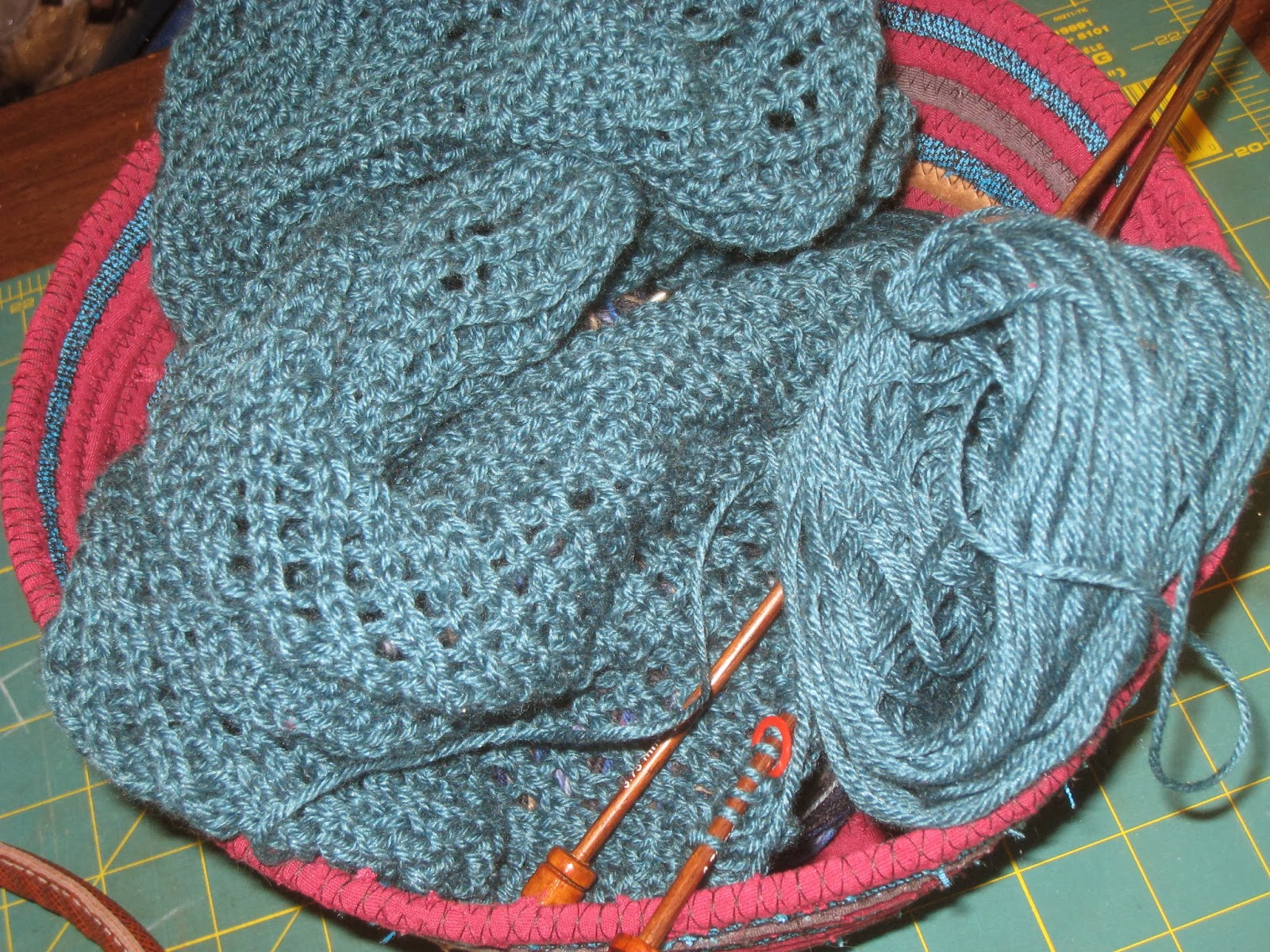 and I'm almost at the half-way point on the scarf.  When my hands got tired, I switched to 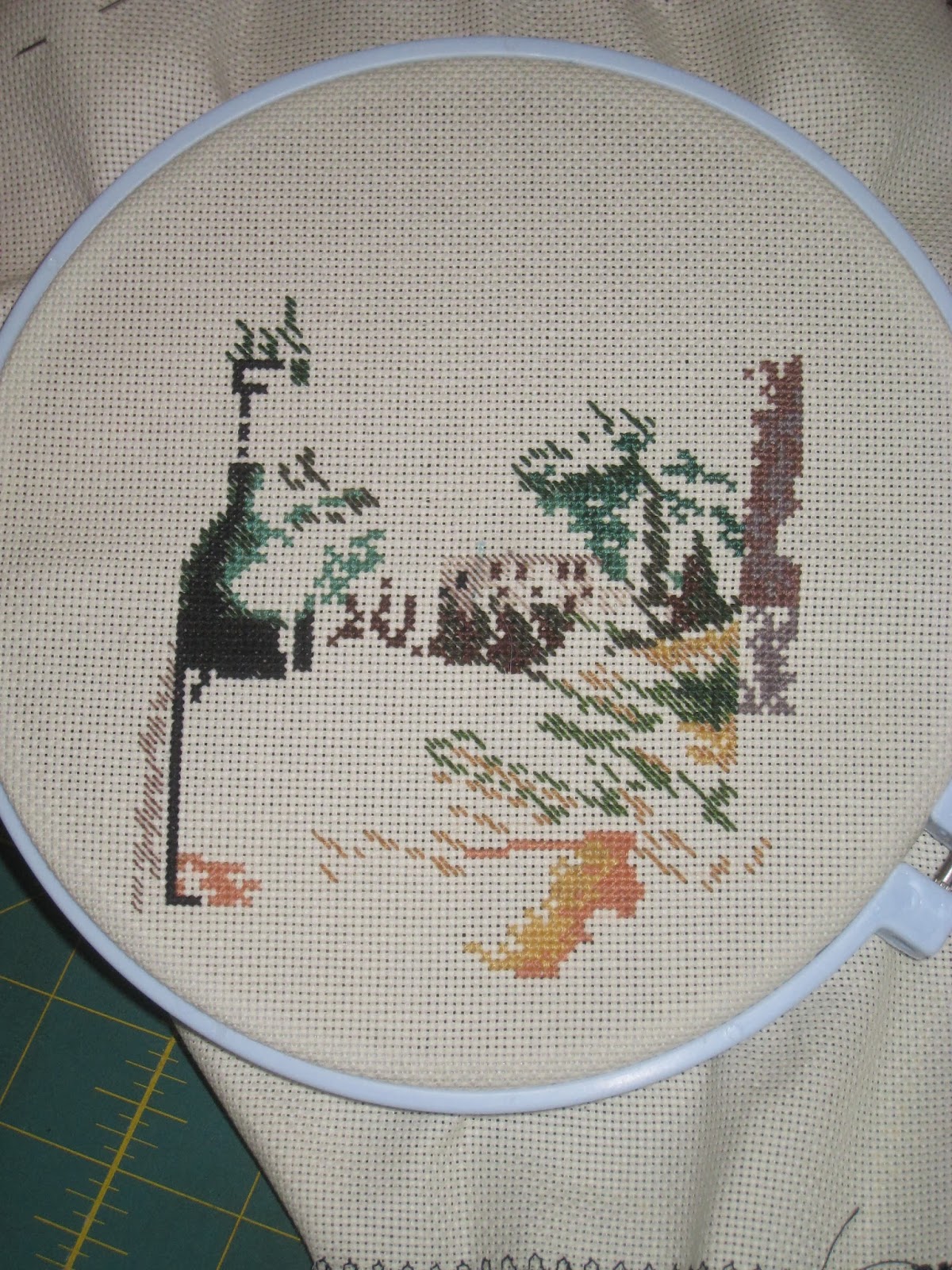 which is easier to work on in bed because of the white background.  The fact that it's also a much, much smaller project is also a perk.

I don't sew when I don't feel good, but I did get up and about some as well, and got out a beeswax candle kit.  Years and years ago I'd gone to a party with a large group of women to make candles out of beeswax sheets, and it was a lot of fun--aside from the logistical problem of 20 blow-driers going at once in an old house and extension cords everywhere.  I'd often thought about trying it again, and maybe hosting my own party, but in the pre-internet days I didn't know where to get the supplies or even where to look, and it got "back-burnered."  But one of the great things about the year-long spending bans is saving enough money to try things one has been thinking about for a while.  I had found a little kit through Amazon, and had set it aside as a "treat" for this year.  And yesterday it was definitely time for a treat. 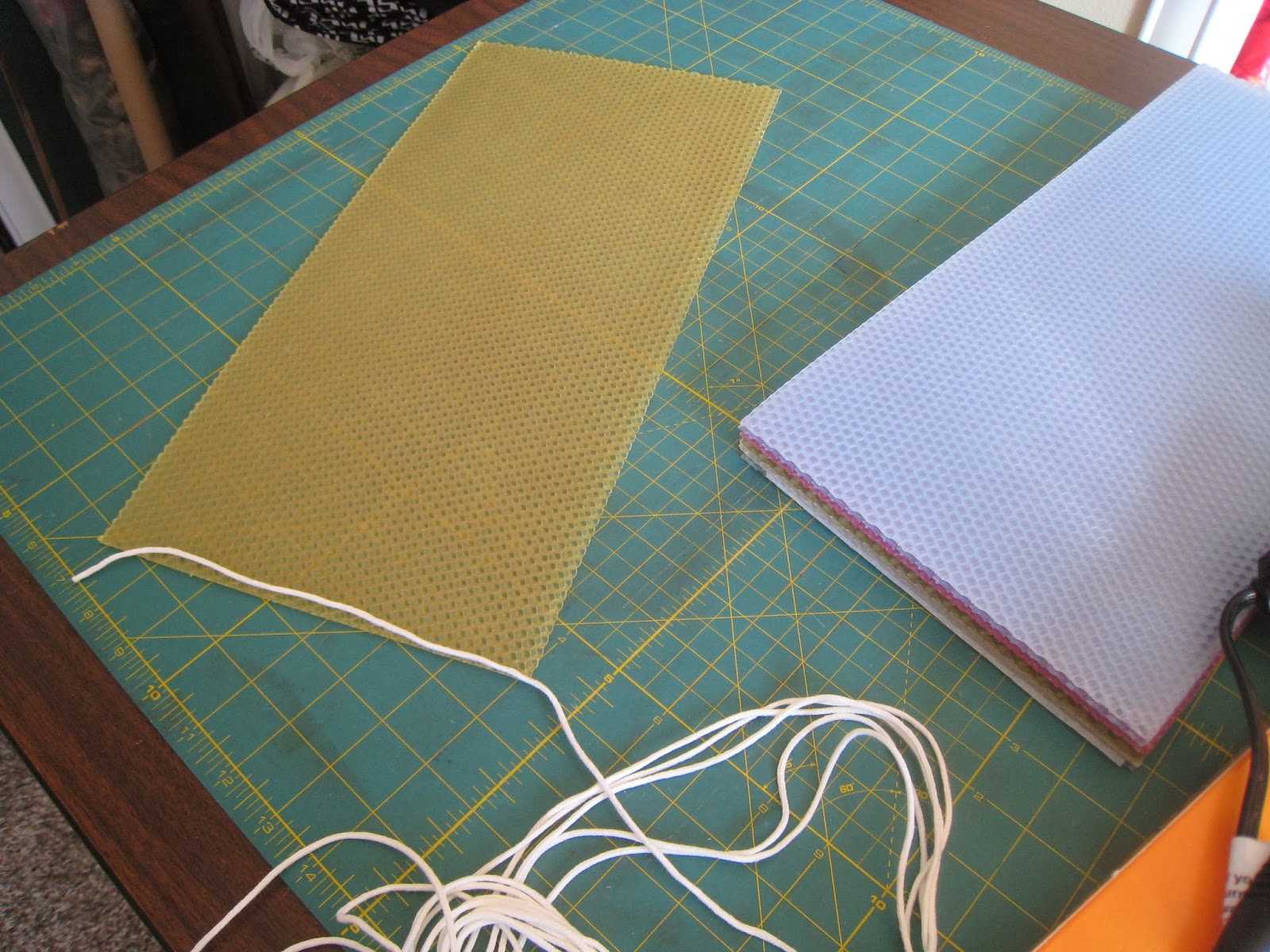 The fact that this was a kit for children 5 and up didn't, in any way, make this less of a challenge for me, and I still managed to overheat the sheets and get wax all over myself, roll them crookedly, and pretty much have every issue a 5 year old could have, but by the end of my session, 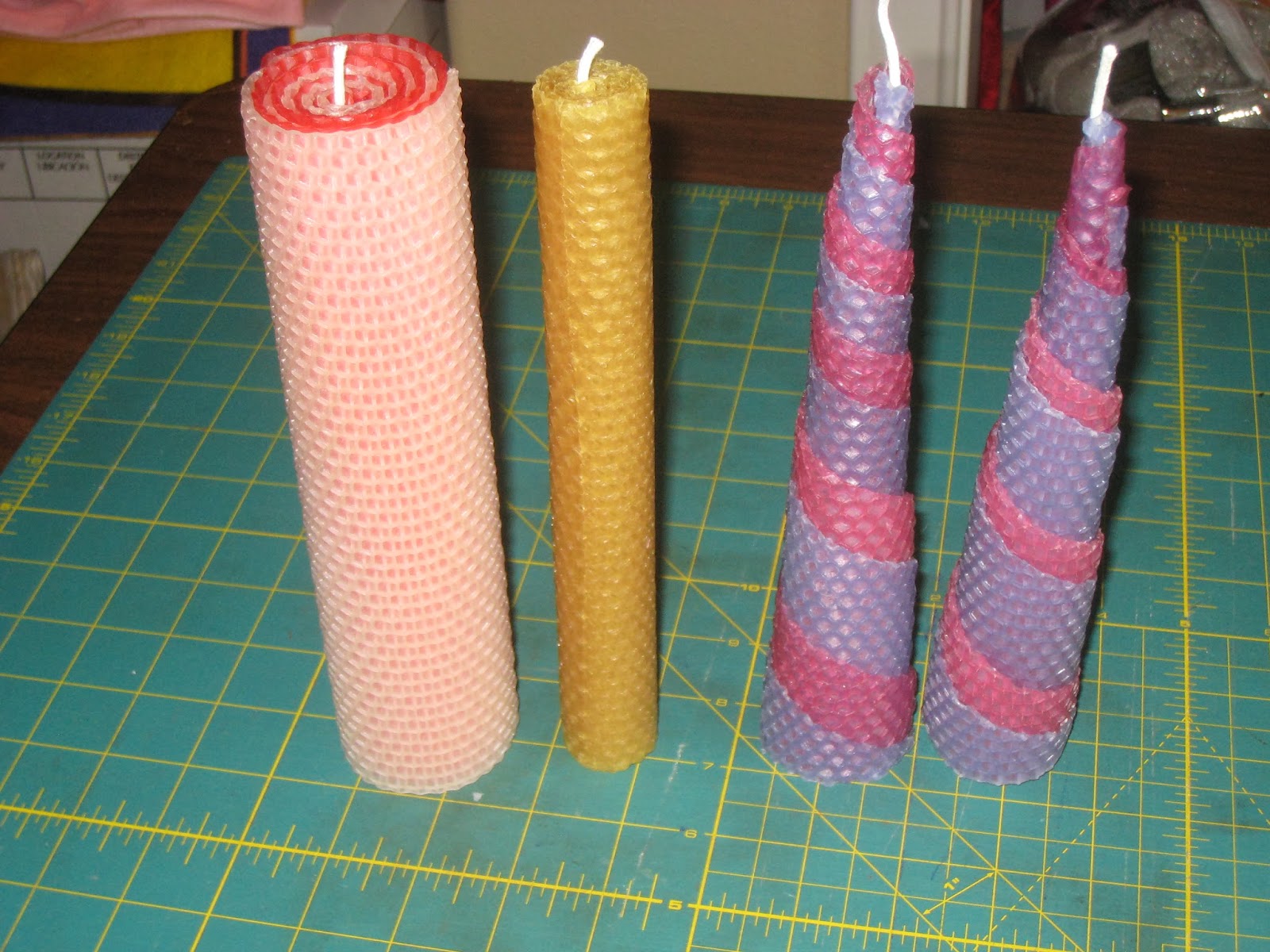 I only had one candle that was truly sad.  I think it could be a good party idea, though I love the smell of honey from beeswax candles as they burn, so even that sad little crooked one on the right will burn nicely.  I've often fantasized about burning my crafting mistakes, but one doesn't actually get to do it very often.
I had heard candles could be therapeutic--I just didn't quite understand why I guess......

Today I'll only do a small walk to loosen the muscles, but my big challenge is going to be 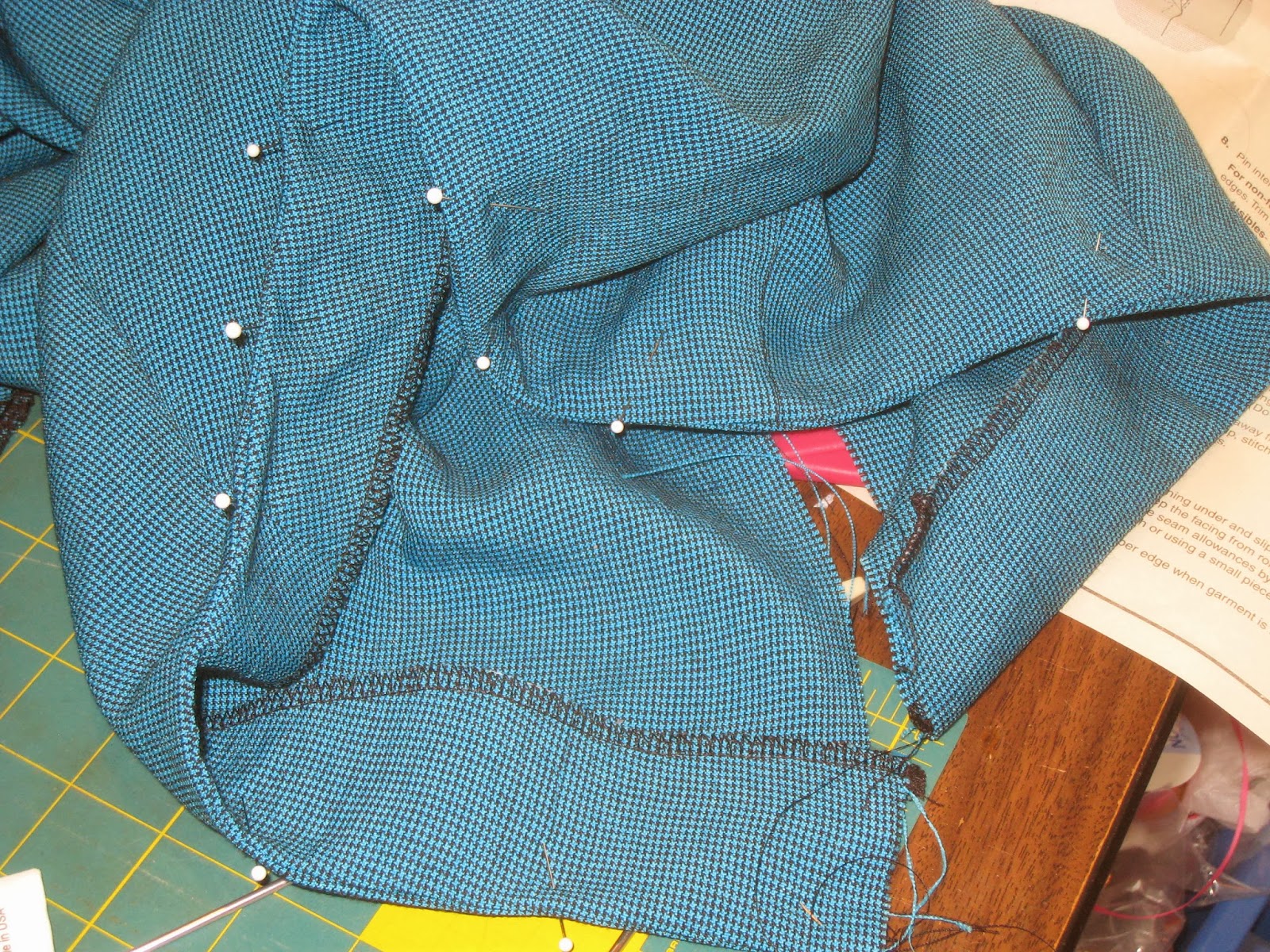 finishing the skirt today.  Last week I had diligently added the waistband facing, found the zipper.....and realized yesterday the zipper should have come BEFORE the waistband.  Had I not attached the waistband with the serger, I would just unpick parts of it.  It's not a big mistake, and I've added enough zippers that it's easy enough to do it either way, but to find that I'd yet again failed to follow directions was a bit frustrating.  This is why I don't sew while on any medication--I do it badly enough without meds..........