.....this "knitting blog" of mine has contained a great deal of sewing recently.  Partly, this is due to the fact that I--in some insane moment of optimism/daringness/inebriation--decided to finish 100 projects within 365 days, and it's much easier to crank out a finished project every 3.65 days when one can throw sewing into the mix.  Don't get me wrong--I love knitting with all the passion that I always have, but unless you usually do even slower hobbies such as cross stitch or painting the Sistine Chapel, knitting is not likely to be one's fastest hobby.

A second reason for my new sewing dedication is that sewing can provide one with clothing.  Not to sneer at sweaters, by any means--I must personally own around 50 by now if not more--but I do firmly believe that knitted pants are wrong for anyone over the age of potty training.  It may be just prejudice on my part, but I do feel quite strongly on this point.

The third reason:  a friend of mine recently decided to take the plunge and upgrade her sewing machine.  For weeks we discussed options, and I raved quite a bit about all the features of my Husqvarna machine and we discussed all the types of things it could do and all the things one can embroider.....and I realized that four years later I still didn't know how to do a whole bunch of the things my machine can do.  I realized I even had presser feet I have never used--a few that I don't even know what one would use them for in all honesty.  But I was enthusiastic about the features (and feet) I could work.  My friend did find a machine--a lovely Husqvarna Topaz--and promptly named it "Betty."

I bought my sewing machine 4 years ago, and I admit, it never even occurred to me to name it.  Probably because I was so intimidated by the thing that the only thing I could have conceivably called it would have been "sir."  After my first attempt at an embroidery project resulted in a tablecloth that actually had to be cut away from the machine, I was even less inclined to call it anything fit for human ears.  But we've had 4 years together now, and I have stopped having to destroy projects to remove them from the embroidery hoops, so I think we're finally ready to be on a first name basis.  Let me introduce you to Jeeves: 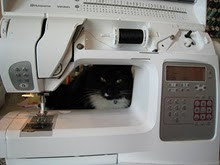 If you are not acquainted with the Jeeves stories by P.G. Wodehouse, or the wonderful series with Hugh Laurie and Stephen Fry, I do recommend them.  (But then again, I have just named my sewing machine).  In the stories, Jeeves is the wise one who knows all, and is generally there to keep Bertie Wooster out of trouble--even if it means taking a very firm line with Bertie.  That's about the relationship I have with the sewing machine.  It is computerized, so while it is normally willing to do my bidding, there have been times when it has to take a firm line and just say "no."  Usually when I'm doing something that will result in a broken needle or two.

The serger and I, however, so not have such a close relationship.  I can use it, and as long as I pay attention and do what it says, we work together nicely.  I have decided to call it "Mr. Tibbs."  That sort of sums up our relationship......