Either veterinarians live to scare people--which is entirely possible as I once took a cat in with a skin irritation & the vet called me with all these possibilities of diseases & did all sorts of expensive tests, then sent me home with a $500 bill, bottle of shampoo and instructions to give the cat weekly baths until the problem went away--or my little sidekick is much worse off than we first imagined. He's heading into surgery now to either repair ligaments or to fuse the bone. The vet also floated the idea of amputation, but neither of us could stand to do that to poor little Theo. We're not sure yet how much motion he'll get back, but we are supposed to be able to bring him home tomorrow. His days of being able to go outside without supervision are probably over, but we're probably quite lucky that we didn't lose him yesterday. I think I'll be able to take him out for walks on a leash because he generally trots along beside me wherever I go anyway, and at least I've already so thoroughly humiliated myself in front of the neighbors that this won't impair my reputation in any way.

I don't actually have the heart to sew today, but Calisto is hanging out with me today for moral support. She doesn't actually like Theo, but she does seem to be missing him--go figure. She's even doing her best Theo pose: 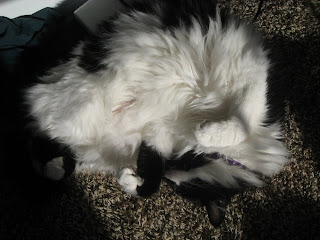 Sewing really is Theo's favorite thing after all, because cats will often try to hide from pain or injury, and Theo's first hiding place of choice was indeed the sewing room. Softy that I am, I'll probably spend the rest of the day fixing up his favorite sleeping places in here.