As of tomorrow, Jeeves will be at the dealership for an entire month, NOT counting the original 2 weeks before he came back with less working than when I took him in.  I have no idea when I might get him back, though I admit I am hoping I might have him back (and fully working) by the end of August, though I am trying not to depend on it.  Which creates a problem for the August Project of the Month.  It can't be a sewing project as I may not have a sewing machine this month, and starting another knitting project would just delay all the other knitting projects which seems counter-productive when I'm trying to reach 100 finished projects this year.  So, I'm hoping I can learn enough about the serger to make an entire project on it.  Granted, I've done napkins completely on the serger, but we have more napkins than we know what to do with--I just can't think of any additional napkin options.  So, for right now, there isn't an August Project of the Month.

I think my serger exercises are going well.  This shows three new techniques: 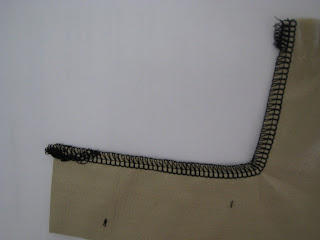 A finished beginning, inside corner turned, and a finished end. 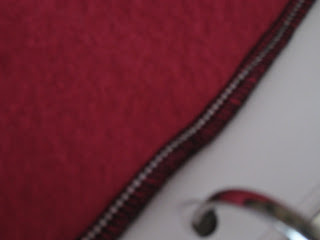 is a blurry picture of a technique I don't quite get.  It's a corded overlock, and the idea is to sew ribbon or cording in to a seam for stabilization or decoration.  That's fine, but the book doesn't explain exactly where the cord is supposed to be--you can see it wandering a little between the two straight stitches and then moving into the looped area.  The drawing for it is just of the machine, so that doesn't help.  So I can't say I've really "learned" this one. 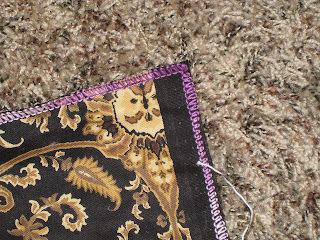 has promise.  A decorative edging stitch COMPLETE with turned corner (okay, I'm proud of that part) that probably has a lot of applications......though right now I can't actually think of any. 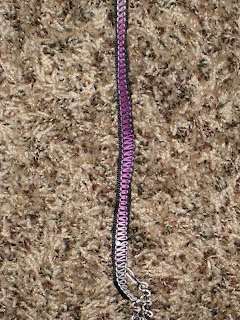 is the same sort of idea, just done on a ribbon to create a decorative braid.  I need some practice on this one to get the stitching even, but this is my favorite technique so far.  Of course, now the big question is, "What can I put decorative braid on?"  I'm very excited about this one.

And I learned to gather on purpose 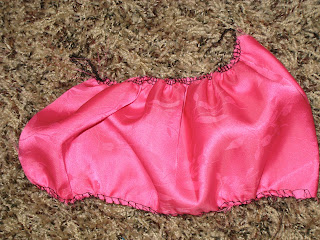 having accomplished it several times on the serger by mistake.  I think that's progress.

I have now completed 15 exercises, not quite understood one, and have completely gotten my arse kicked by one:  blind hem.  I cannot get this one!  I am not even getting close.  I worked on it for over an hour and the only thing I ended up with was a strong desire for alcohol and a slight twitch in my right eye.

In desperation, I went back to my lovely old standby: 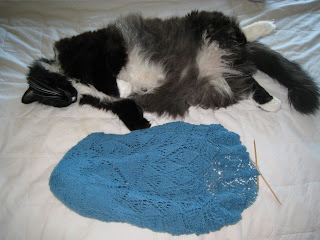 Knitting!  The Pi shawl is getting bigger, though I think it probably needs to be all the way to Theo's feet before I can start on the border.