So, the "Spring Stashdash" challenge I'm leading on Ravelry ends on July 1.  I started with this: 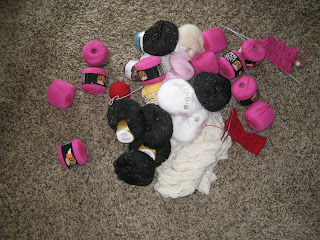 and everything is finished except maybe 2 more dishcloths and the pink sweater.  I've almost finished the front, though 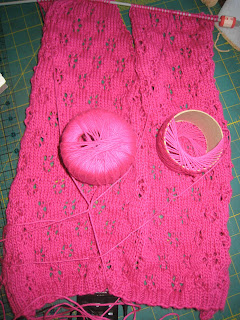 and might actually finish it today, thanks to a mysteriously early start today......... 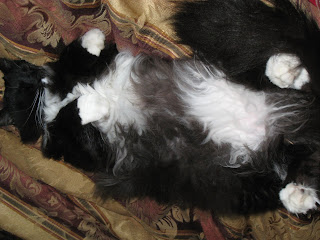 So I have 13 days to finish 2 sleeves, the seams, and the neck.  I think it could happen.  It won't technically empty my basket as I'm positive I'll have pink yarn left, and I have almost 3 balls left over from Andy's sweater 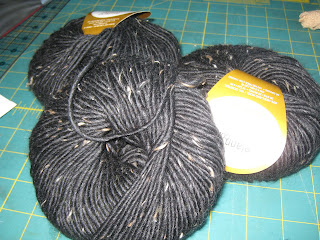 as he didn't seem to think the idea of a sweater and matching hat combo was particularly "manly" once one is over the age of 5, and he might have a point there.  I haven't exactly seen Antonio Banderas or Brad Pitt walking around in sweater and tam ensembles.  Yet.

I am, of course, already starting to fantasize about working with new yarns 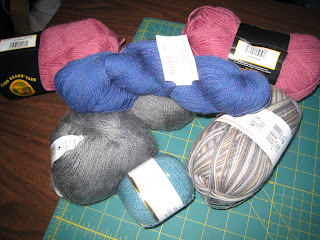 and might even be tempted to cast something on if this pink sweater weren't now so close to being a Finished Object, and it being possibly the oldest yarn in my stash, and if I use it up then it feels less like yarn hoarding than just yarn stashing.   There's probably a very fine line there, and while there's enough pressure being surrounded by yarn I actually want to knit with, I think it would be sort of disturbing to be surrounded by yarn I was never going to use.  Unless for some strange reason I was in Walmart and then that make a lot of sense, but that seems unlikely.

And the big news of the day: 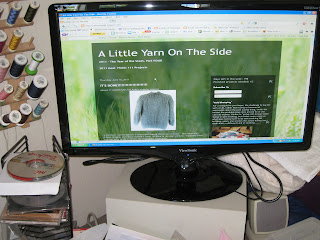 The new monitor is here!!!!!!!!!  And it is larger than our television, which is sort of funny as the only reason I got a 19-inch television after my old 15-inch one finally stopped working is that I had received so much flak about the 17-inch monitor I had then being bigger than my television screen.  Personally, except for subtitled movies, I don't see why television screens need to be huge.  I've heard that other people don't treat watching television as just something to do while knitting, which amazes me.  Isn't that the whole point of tv?