You can blame today's complete lack of knitting on some spring weather (OK,with a high of 46 degrees, it wasn't really "spring" weather, but we did have sunshine, which is close enough in February). Theo and I spent several hours outside enjoying the sun. This time I was prepared and had a book in my pocket, gloves, and a travel mug full of coffee. If I could just knit with gloves on, Theo and I would both be happy with these outings.

The private lives of cats is an interesting thing to observe. Their days seem to involve a lot of sniffing and rubbing, often over & over in the same spot. Some smells warrant growling, a few some hissing and tail bushing, but all must be explored daily. Then there's a little grass chewing, lots of licking, and lots of short naps. I realize he probably thinks my playing with sticks and strings gets a bit monotonous--especially since I won't let him chew on the yarn--but we'll both be relieved when he gets a bit more freedom.

This evening we found something we could do together: 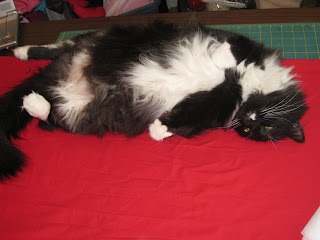 I decided to make Valentine's Day slipcovers for the throw pillows on the couch. Each has a different design embroidered on them, 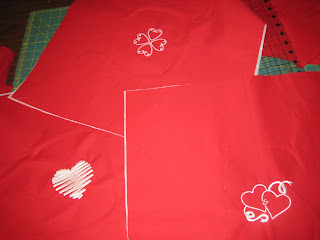 (there will actually be 4, but one is in the machine now), and I think I'm going to do a satin stitch border about 3 inches from the edge. Since they'll only be used for about 2 weeks every year, I don't want to make them too complicated, so I'm just using the pillow sham type of overlapping back construction. I'm not doing a zipper unless it's really necessary in life. We all have our limits.

Theo has therapy tomorrow, so there will be some knitting!!!!