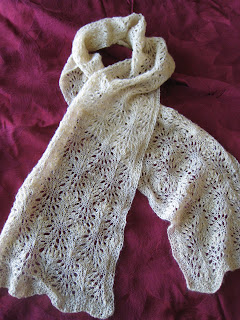 This scarf is actually very simple, but I'm trying to make the directions as thorough as possible.  It has a moss-stitch border of 6 rows on top and bottom and 4 stitches on each side, and uses the stitch pattern KNOWN as Ostrich Plume (hence the name).  There's a 3-stitch decrease using a slip 2, k1, pass slipped stitches over, which creates a nicer look than the traditional slip 1, k2tog, pass slipped stitch over technique, but feel free to use the more traditional decrease if you choose.  I used a shorter bottom and top edging to allow the wavy stitch pattern to pull the border into the wave effect, but you could certainly add a few extra rows of moss-stitch to the top and bottom if you would like.

Repeat Row 2 4 more times, until you have 6 rows of moss stitch.

Repeat Rows 1-32 as established until the scarf reaches the desired length, continuing with the moss stitch borders on the outsides of the markers.  Work 6 rows of moss stitch as established, then cast off loosely.  Weave in ends and block. 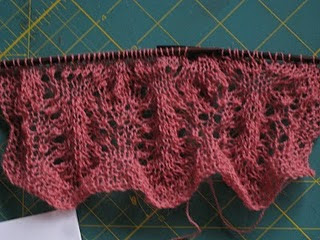 and using an alpaca with a slight halo effect: 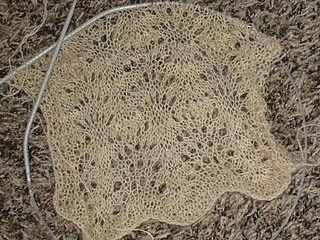 Both work quite nicely.

This formula--a moss stitch border around a lace stitch pattern--is an easy one to use for any number of projects.  Barbara Walker's stitch pattern dictionaries--or ANY stitch dictionaries containing lace patterns--are a wonderful source of ideas and inspiration, and this formula will work for most with just a change in the number of stitches cast on.  Such a simple combination of stitch pattern and border is not a true "design" and is shared here because friends have asked for the pattern, and sharing is good.

Knitting And I Have Made Up!!!!

After ALL the sewing and gardening and embroidery, I'm back with my first love: 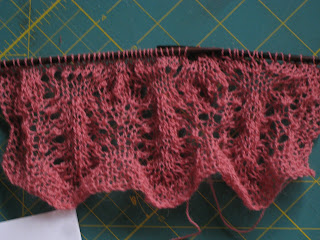 We just needed a little time apart, I guess.  And freakishly cool weather in the summer doesn't exactly hurt wool's appeal, to be quite honest.

This is another Ostrich Plume scarf, and after several requests, I will be adding the pattern to the blog later.  It quite honestly takes longer to write a stitch pattern than it does to knit, but I will hope to have it on the blog before the scarf is done.  And considering I just started this last night, I definitely think it could be this month!
Posted by Toni at 8:01 AM 2 comments: Links to this post