After much debate and hoping everyone else would think the same way, I decided that the yarn for Andy's sweater is actually overdue from my allotted purchases from January 1, 2009 and had already been "allowed" so it wouldn't be cheating.  So.......THERE IS YARN ON ITS WAY TO MY HOUSE!!!!

Being no fool--or at least not one right at that moment, I was flying through Elann's ordering process before I could be seduced by any other yarns so quickly that I didn't double-check the address and had to email them after I placed the order to explain that the address they had on file was no longer correct.  (And having a post office box where yarn can be sent so your husband won't see is a bad, bad idea....that isn't why I had one, but it's a bad idea nonetheless) I did allow a set of blocking wires, but I had been looking for a set so that was a little less of an impulse buy than one might think.  AND THERE IS YARN ON ITS WAY TO MY HOUSE!!!!

Since I am 4 WIPs away from being able to cast on the new yarn, the kimono shawl and I spent some time together first thing yesterday morning 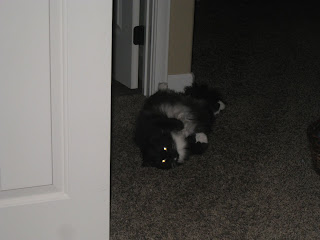 which Theo only sort-of found acceptable.  But when the bridesmaid quilt came out 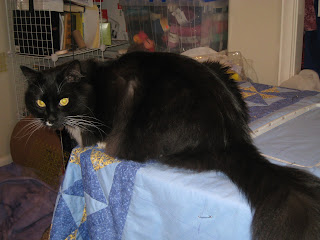 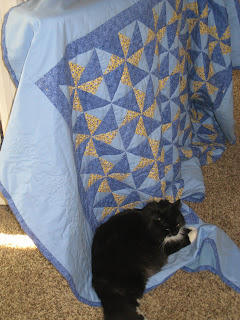 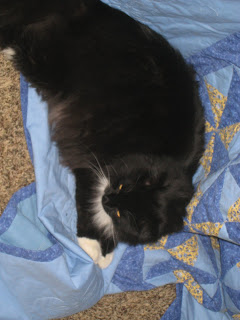 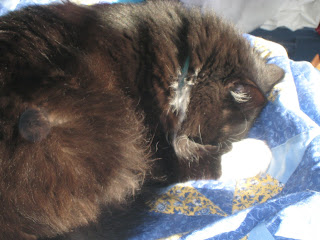 he was all over it.  I'm glad he likes sewing and everything, but I do have fantasies about giving gifts that are totally free from cat hair just once in my life.

I got 2 more sides embroidered, some of the binding sewn on, and 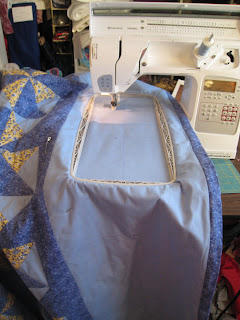 this morning I have the last side in the embroidery machine.  I still have some of the binding to stitch down, and then I have to do something about the open ends that the embroidery design has left on each side, but I think it could actually be done next week!!!  Watch for 9 yards (my estimate, of course, but I think it's probably close) being added to the "fabric used up" tally.  Technically, I think I should get another 50 yards just for finishing a 3 1/2 year old quilting project, but I don't want to get too smug.  I still have one more to do.