You know, aside from failing to make even the smallest dent in either the fabric or yarn stash, the Great Ornament Experiment is truly the most fun challenge I've set for myself.  I wouldn't want to do it two years in a row, but it's certainly fun for this year.

Yesterday was unbearably hot, so aside from treating ourselves to lunch out and watching all the illegal fireworks from our bedroom window, we pretty much skipped 4th of July festivities.  It's certainly my least-favorite holiday--possibly because now it involves wretched neighbors who shoot off fireworks every night for at least a week leading up to it AND a week or more afterwards--or because the blistering heat of July is usually joined on July 5 by smoke because setting off fireworks in a desert state works out just about how one would expect.  Boise alone had 12 fires last night.  So, after an hour of early morning gardening, 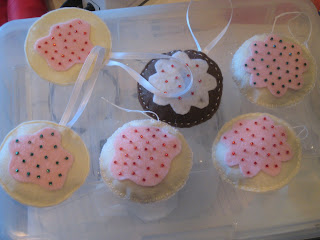 I spent most of the day sewing on beads.  Robin had suggested using a blanket stitch on the cookies, 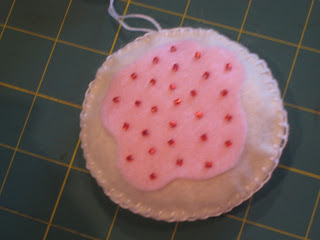 which I think looks very nice.  I tried the method (sewing the top onto a large piece of felt, then cutting it out)  I use for gingerbread men and trees on another, 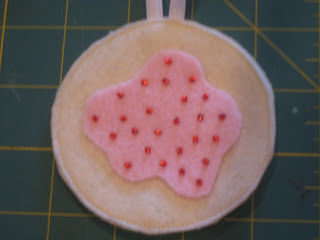 but got so excited about how well it was working that I completely forgot to stuff it.  Oops.  To be fair, I've had real cookies turn out about like that as well--usually because I forgot to add baking powder or soda, or mixed them up.

I can't decide if I like the more symmetrical frosting or the freehand frosting better, but I've used up all the cookie shapes I cut out and decided to move on to something else for a while.

A couple years ago I found this at our library's annual booksale, 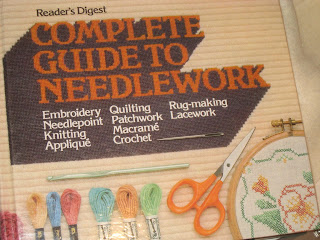 and decided to look for some new ideas to learn.  My quilting grandmother once tried to get me interested in embroidery by giving me a sunbonnet girl quilt block that she had prepared for me, but if it still exists, it's in exactly the same state as it was when she gave it to me.  I don't know why it didn't appeal to me at the time, but thankfully I was not her only attempt.  One of my cousins, Ryan, turned out to be quite a whiz with a needle and made the most amazing quilt of embroidered antique car blocks one would ever see.  I am glad to know that she saw her skill passed on to someone.

I thought I'd start with something simple, so 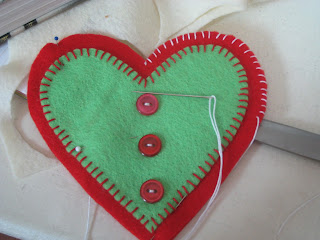 I thought an overcast stitch would look best after the red stitching around the green heart (which is more of a neon-lime color than it looks here), but I think perhaps a contrast (or better stitching) would have looked better.

While I've been working on the heart ornament, 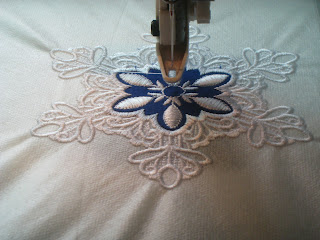 Jeeves has been making a new applique ornament.  This time I used cotton as the fabric, and it seems to have worked pretty well.  This will definitely have the least-obvious wrong side out of all of the applique ornaments so far.

And, lest you think this knitting blog has given up knitting entirely, 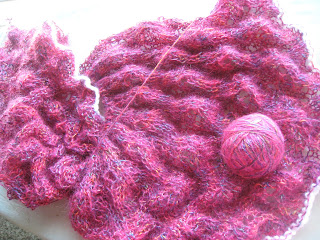 I'm halfway through the third and final pattern repeat for the body of the shawl.  When that is done, I'll start on the edging, which is knit separately and joined with a three-stitch bind-off.  As it's in sport weight yarn ans size 7 and 8 needles, I think this might not be as scary as it sounds, though after the purple swoopies incident, one does tend to approach these things with caution............sometimes.