Andy:  Greg said Frank is in town, and will bring him along to your body party, if you would like.


Toni:  I didn't know it was a body party.  Toning or burying?

Andy:  Which goes best with pizza?

And We're Down From The Ceiling!

Seriously, has anyone ever taken 12-hour Sudafed without knowing that it was a stimulant?  It's one of the drugs you have to buy from the pharmacist because people use it to make meth--which is surprising as the last thing I would have thought anyone would want to do was to INTENSIFY the feeling of just plain old Sudafed.  So, being a foolish person who tends to believe that over the counter drugs are relatively harmless, I took Sudafed for 48-hours before I finally went to the doctor for something less scary for allergies.  It's not quite as silly as it sounds--the first night I couldn't sleep, I assumed it was just because I had taken Nyquil for 3 nights in a row before that, and that usually would make it hard for me to sleep the next night.  But the following night when I was exhausted but ready to repaint the bedroom at 3:00 AM, I did figure things out, and have stashed away the rest of the scary Sudafed until maybe a future Christmas where I am stupid enough to still be trying to finish gifts at 2:00 AM on Christmas eve...........

Once I stopped shaking, I pulled out the very last spring table runner to finish, 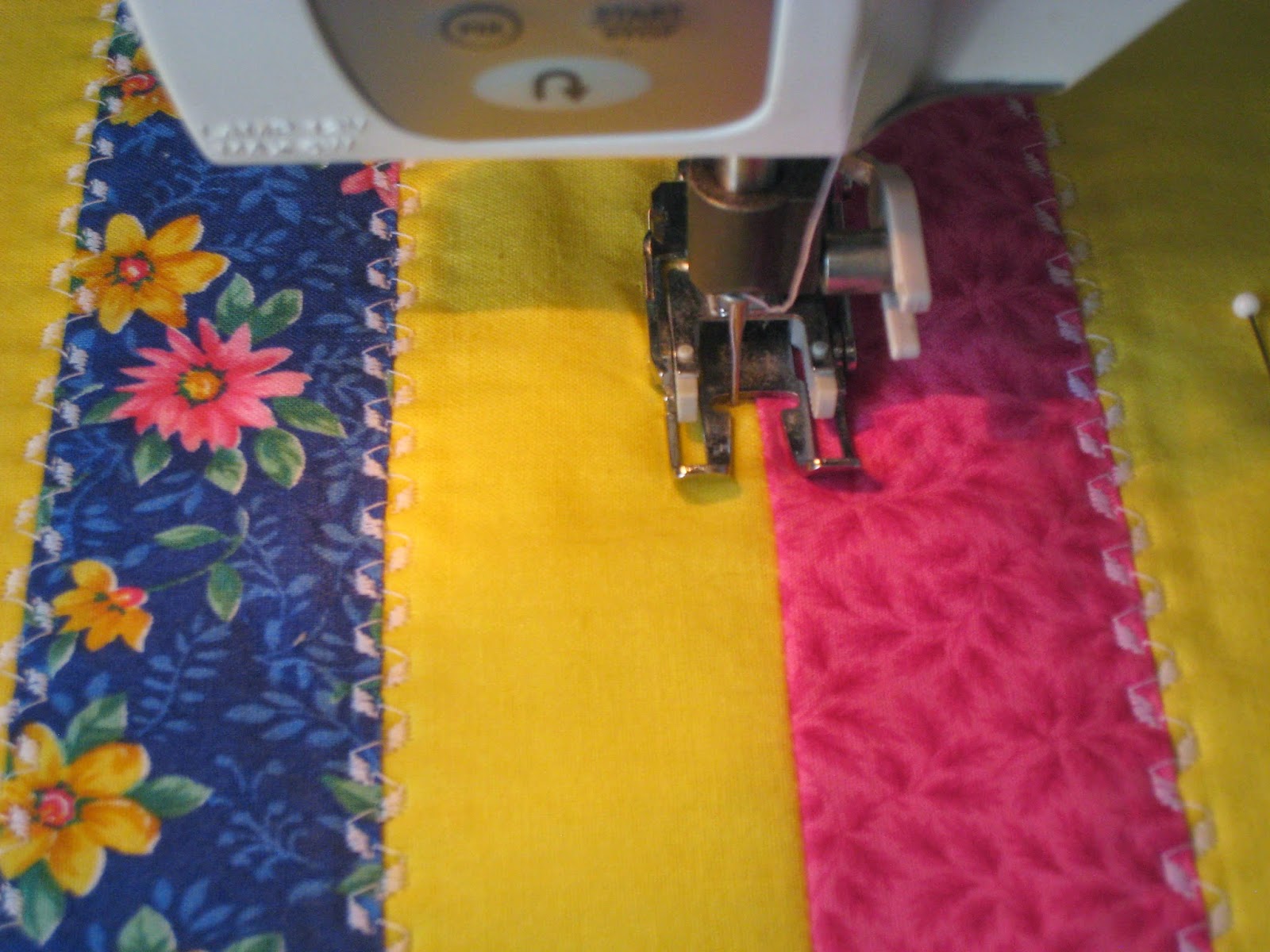 and I have to say, the walking foot and I are almost friends.  Almost.  I wasn't actually sorry to put it away, but I feel like I know how to use it at least.  Since I had prepped some practice material, I also practiced my stippling, 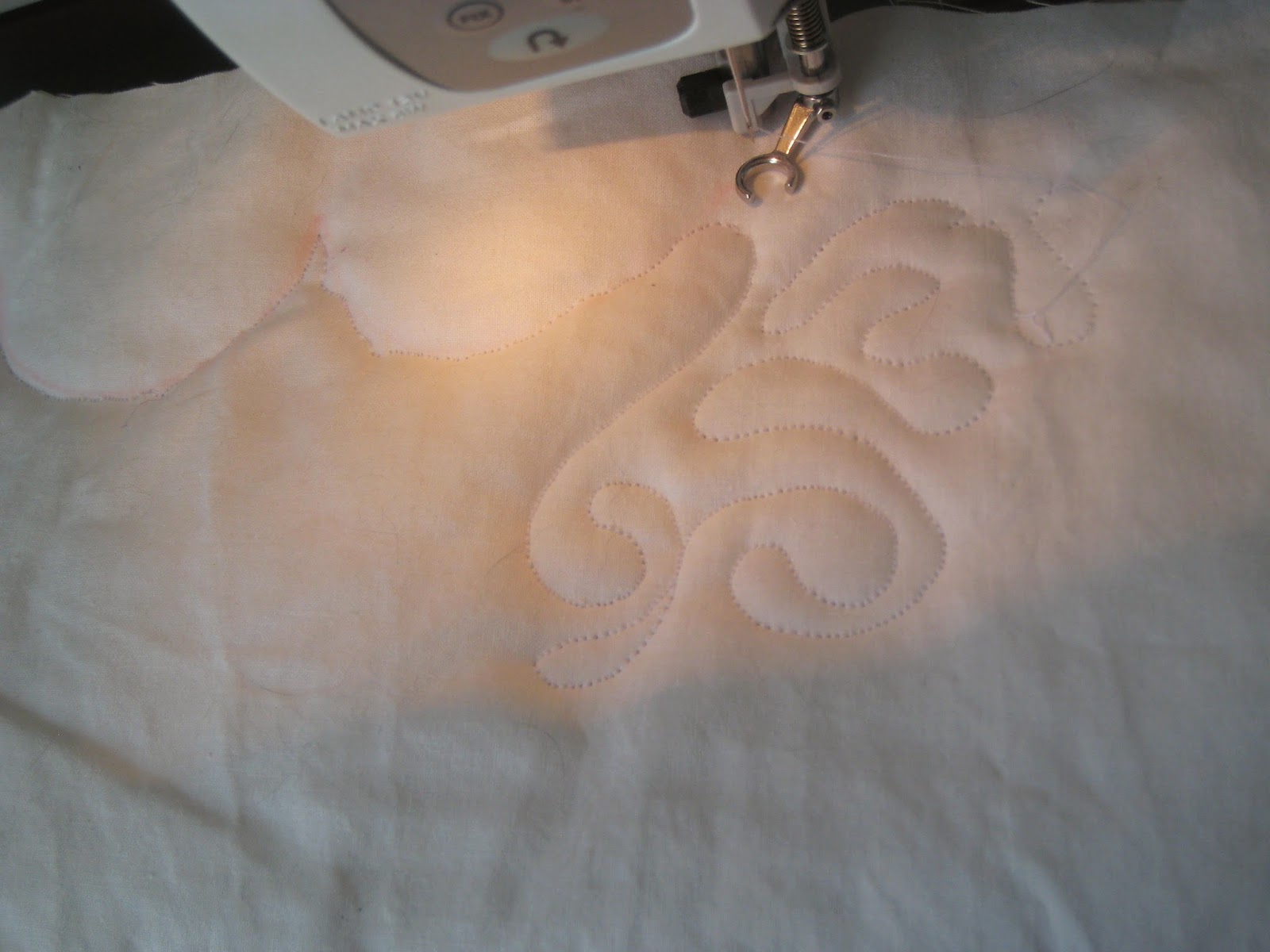 Andy is putting together a small party for my birthday next weekend, and we're doing Make Your Own Pizza.  I have wanted to make a chalk board table runner, so I thought this would be the perfect reason to finally get it done.

Nancy's Notions had a "special" where if you ordered two yards of chalkboard fabric, you received the project book 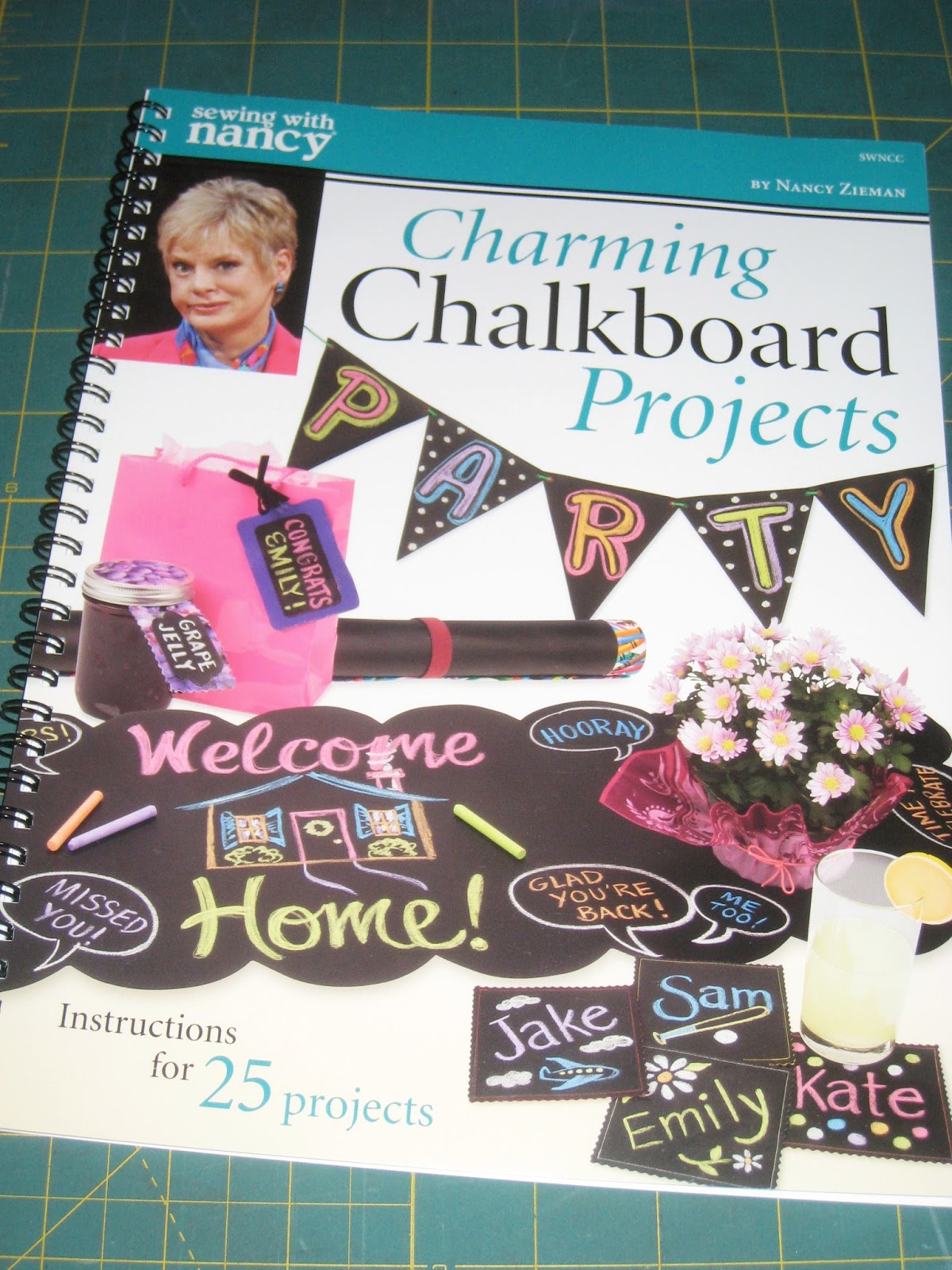 for "free."  Since their chalkboard fabric is twice what it is at Joann's, it's not actually THAT much of a deal, but I thought the fabric would be tricky to use and wanted some directions.

The BEST thing about the project is that at least I didn't try it while on speed.

I don't know if I was still a bit fuzzy or what the problem was, but I didn't find the directions in the little booklet all that clear, so I found the program on Youtube:
That helped, but they showed the runner being made in small scale.  What they did NOT cover, then, was how in the heck to work with a 47-inch stiff, heavy, and remarkably awkward piece of chalkboard fabric.  And, to make matters even more fun, 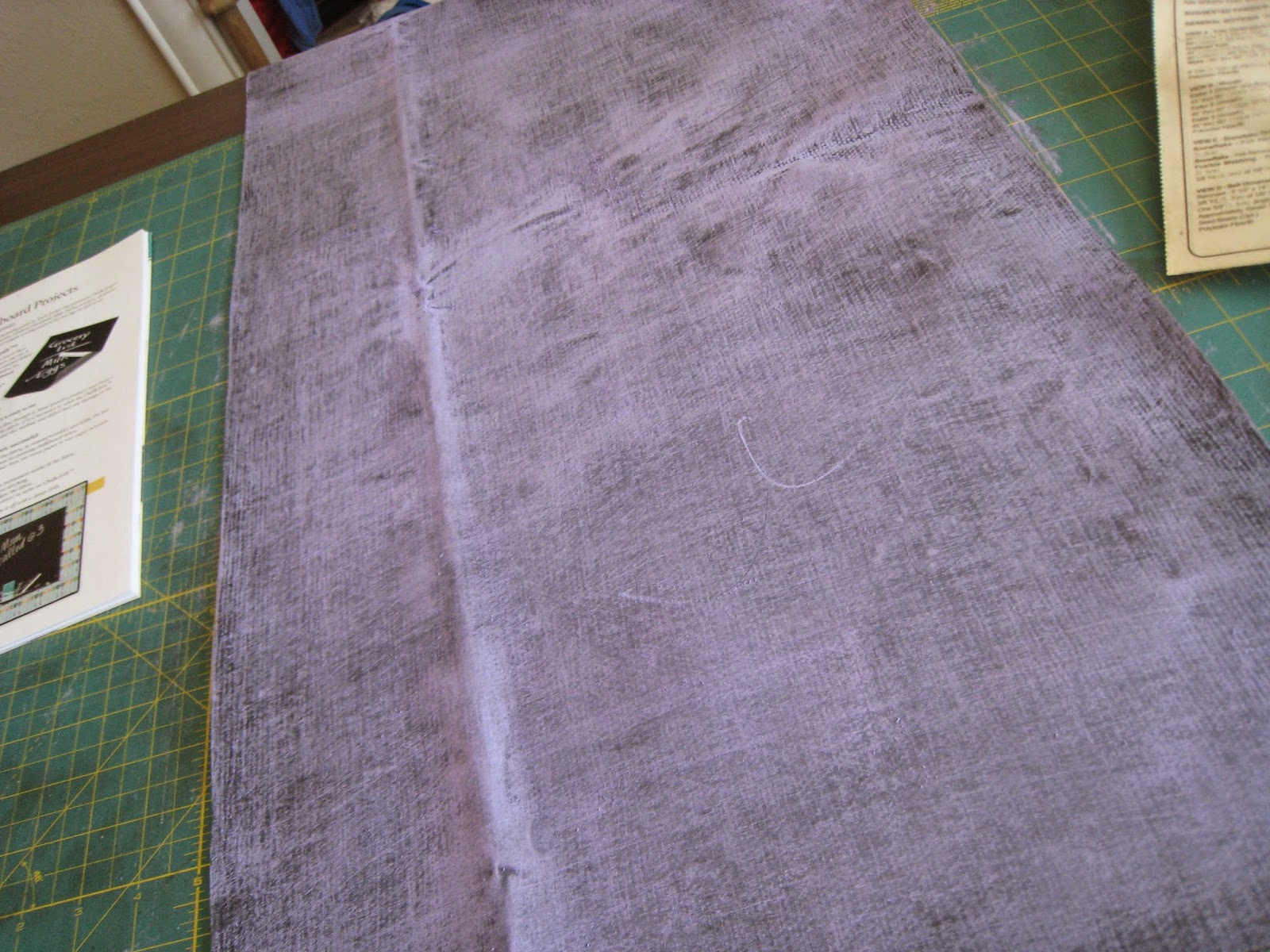 they didn't explain how to get the big honking CREASES out of the fabric which are there because they folded the chalkboard fabric for shipping, and the suggested warm-iron-on-the-back-using-a-press-cloth method is no match for the creases from shipping.  After ironing it TWICE, you can see how much of the crease was still left.

Interestingly, the fabric has to be "cured" before it can be used, 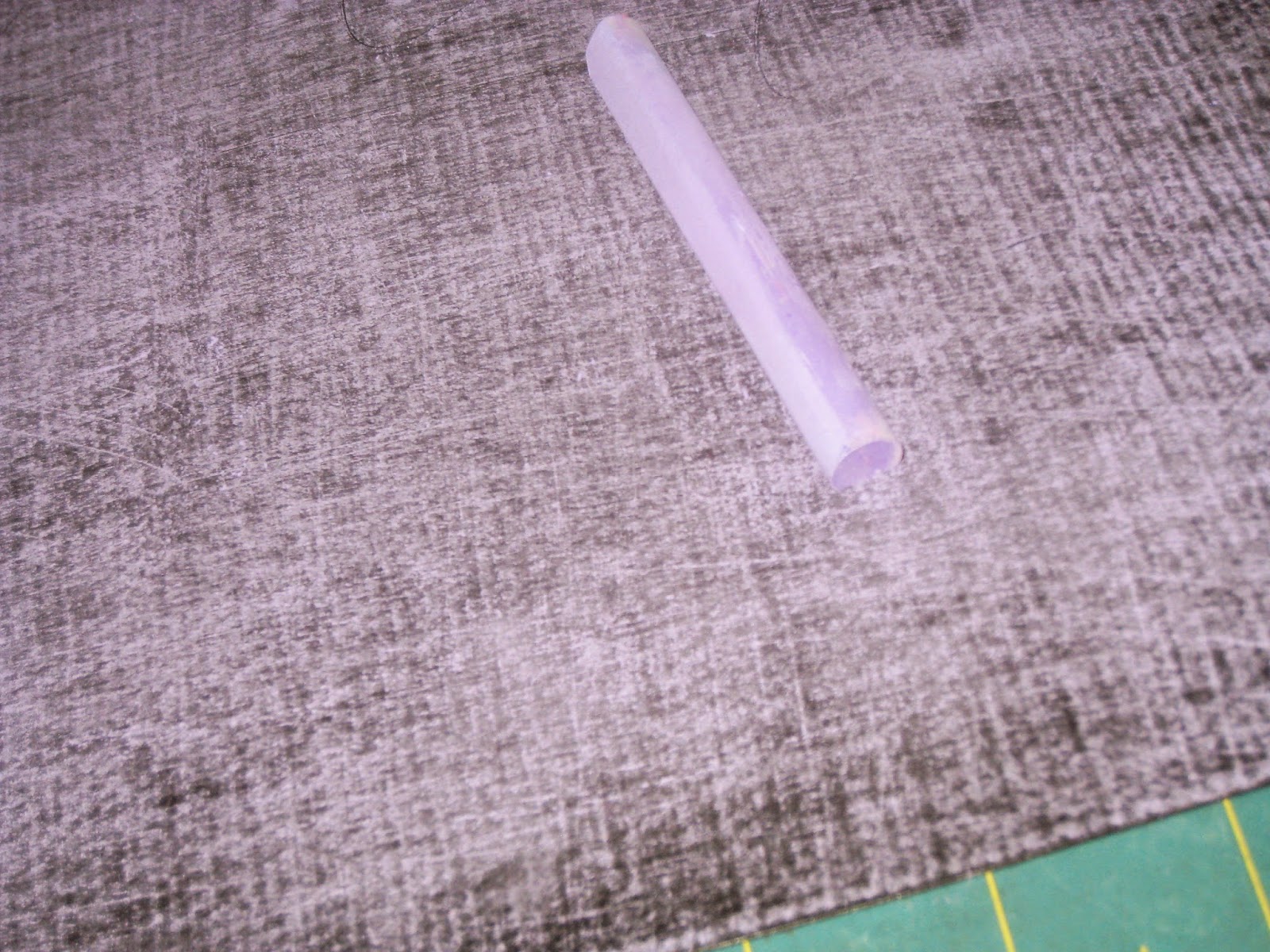 which involves rubbing it with a piece of chalk and while I used regular chalk sticks and NOT sidewalk chalk (which doesn't work apparently), the chalk left scratches in the chalkboard fabric even when rubbing the chalk on its side as instructed, and they're apparently permanent.  And the chalk doesn't completely come off, even after several wipes with a damp cloth. 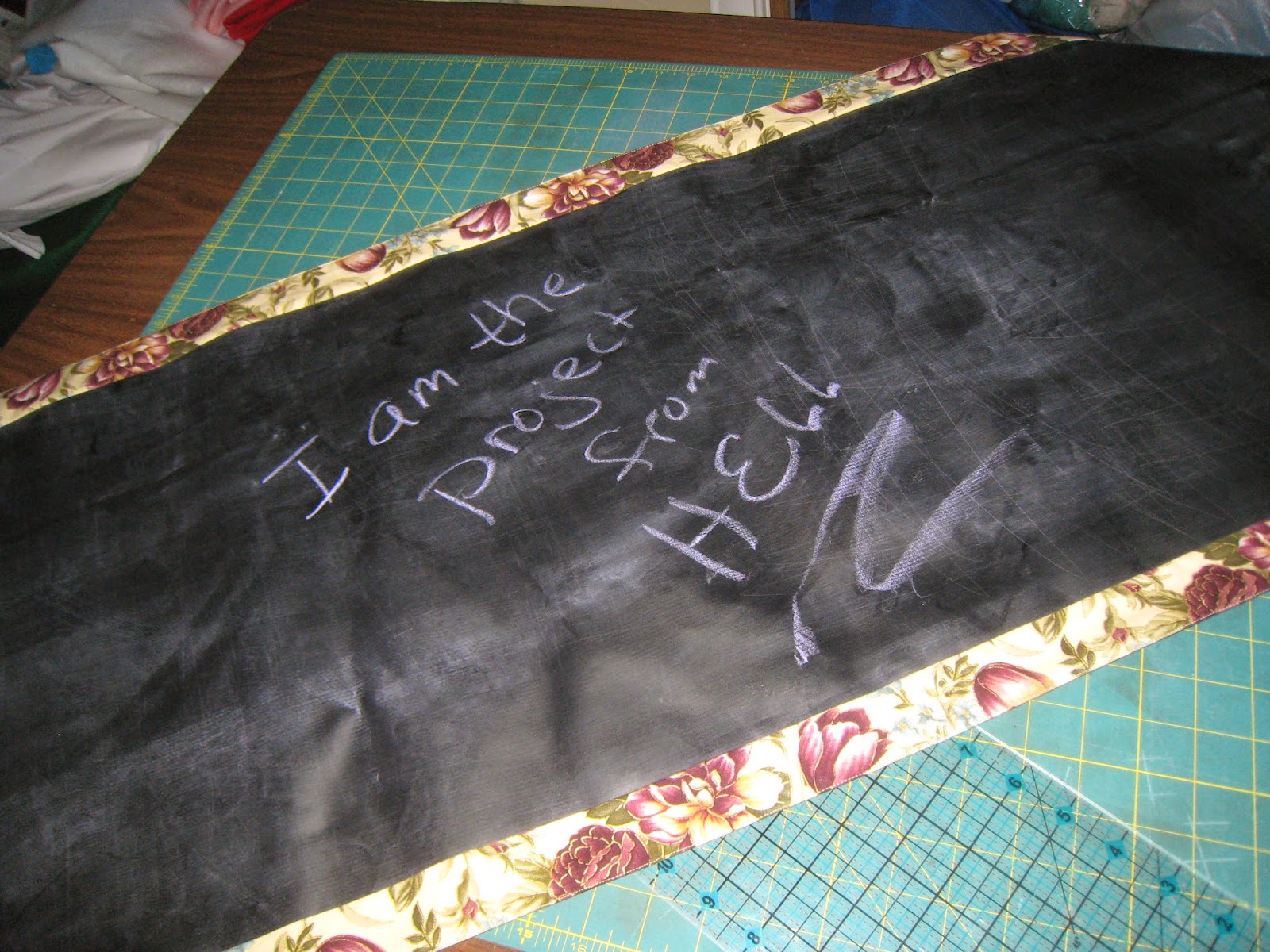 But we have a chalkboard table runner.  And it is an only child.

There is NOTHING like a frustrating project to prompt me to throw things away (or just throw them), so this morning I dug out my Red Heart acrylic stash and dumped all the colors I won't use again: 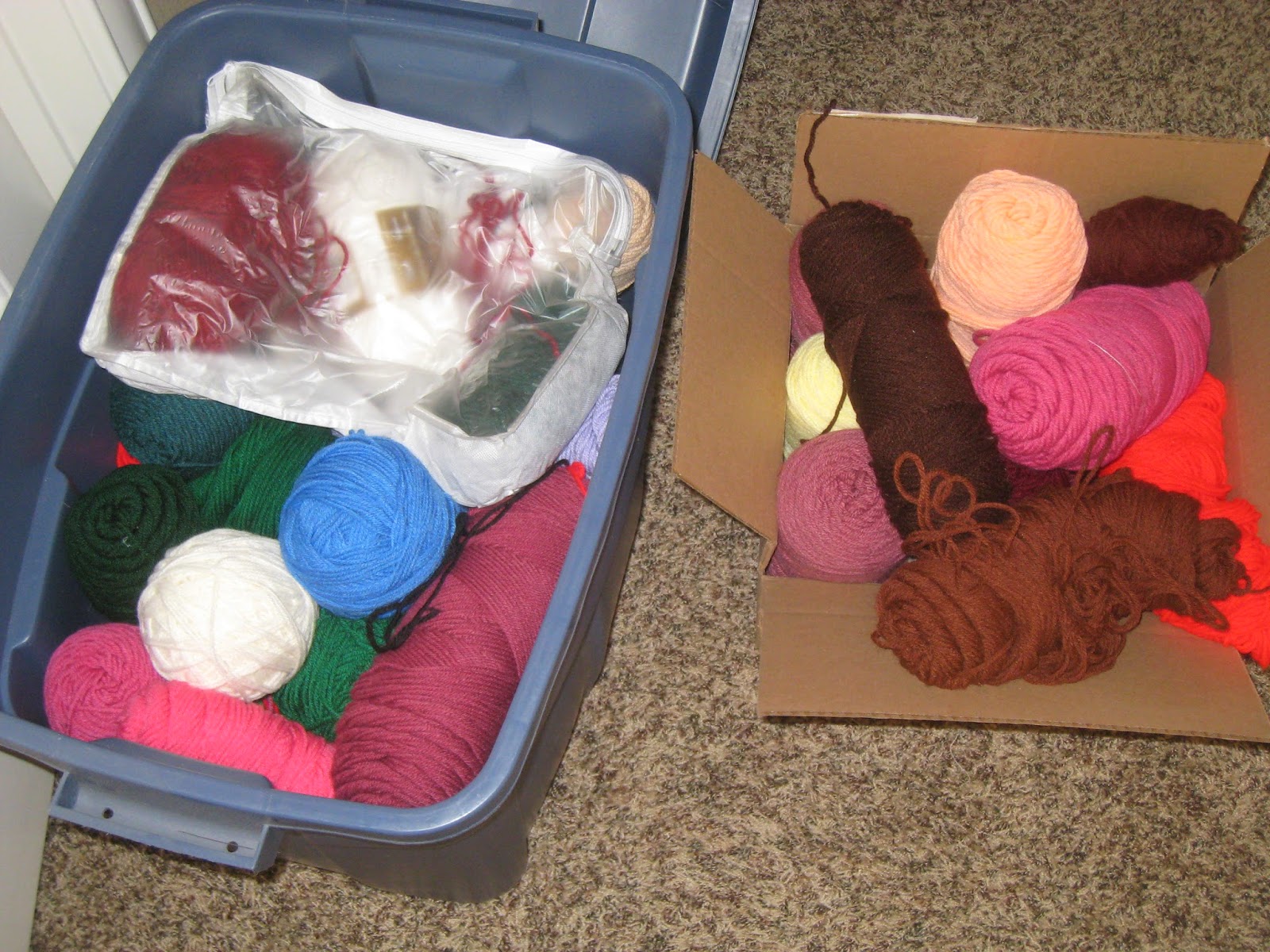 For years, I knit Christmas stockings for people when they got married, and while I dislike Red Heart acrylic for almost anything else, it really is good for Christmas stockings and Christmas ornaments.  The rough, scratchy nature that I dislike so much is perfect for crafts, so I've always hung onto it, and I did use it to make afghans many, many years ago, so I had some leftover yarn from that.  Well, I am probably never going to make an afghan again--I just donated all of mine to a charity shop.  And, while I might still make Christmas stockings, I have never made the bear-patterned stocking and am seriously unlikely to do so at this point, so I don't need any brown.  I can't even remember why I have the peach yarn, so the 12 skeins in the cardboard box are finding a new home.  And later this afternoon I might take some of the survivors and sit outside in a lawn chair and knit some more mitten ornaments....

In the meantime, I have started cutting out the new Christmas stockings, 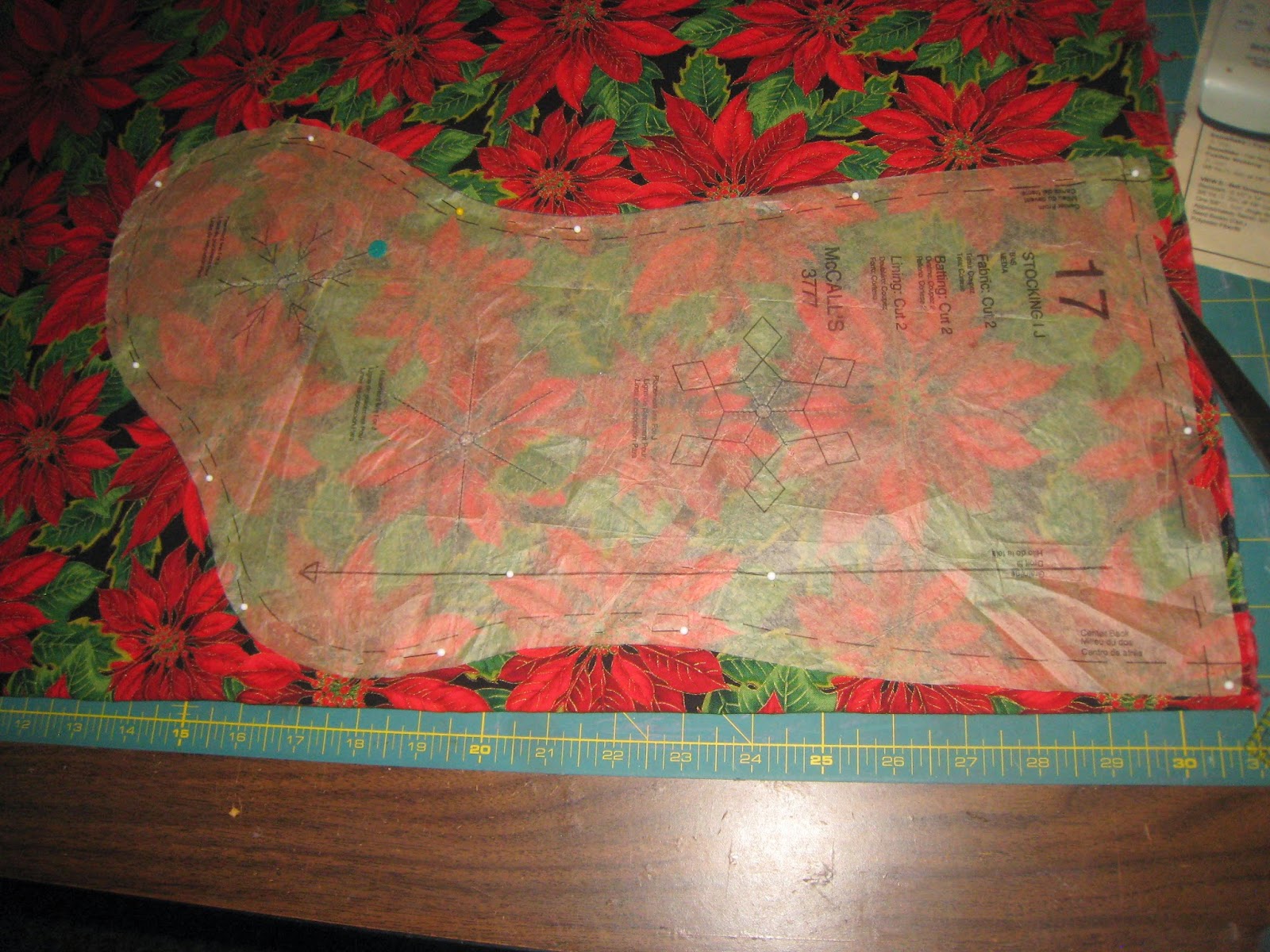 and would be much farther along if someone weren't napping on my lining fabric: 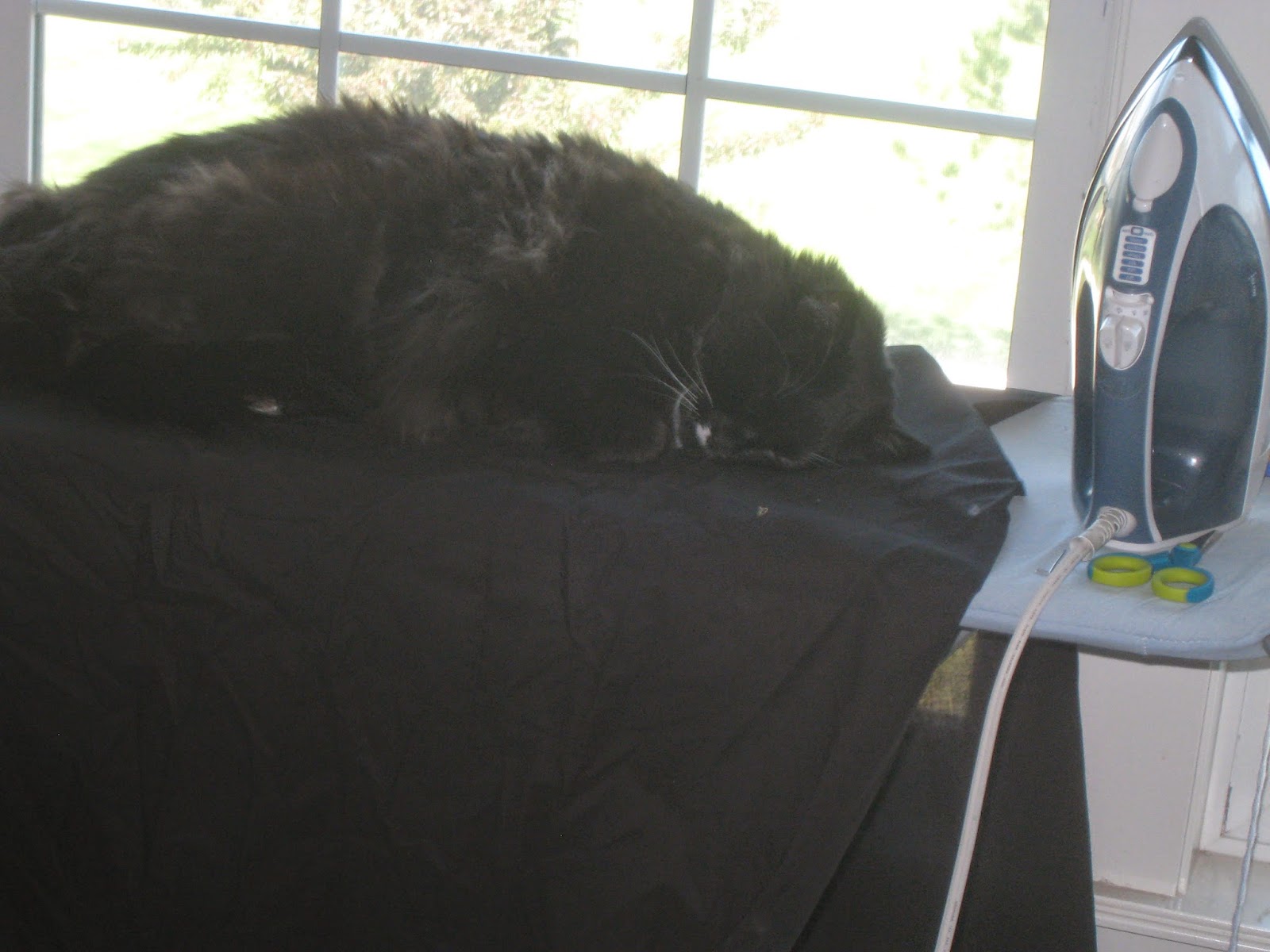 He's such a big help.

Being too big of a softie to move him, I decided just to keep cutting.  I have strips ready for a set of 4 kimono ornaments, and 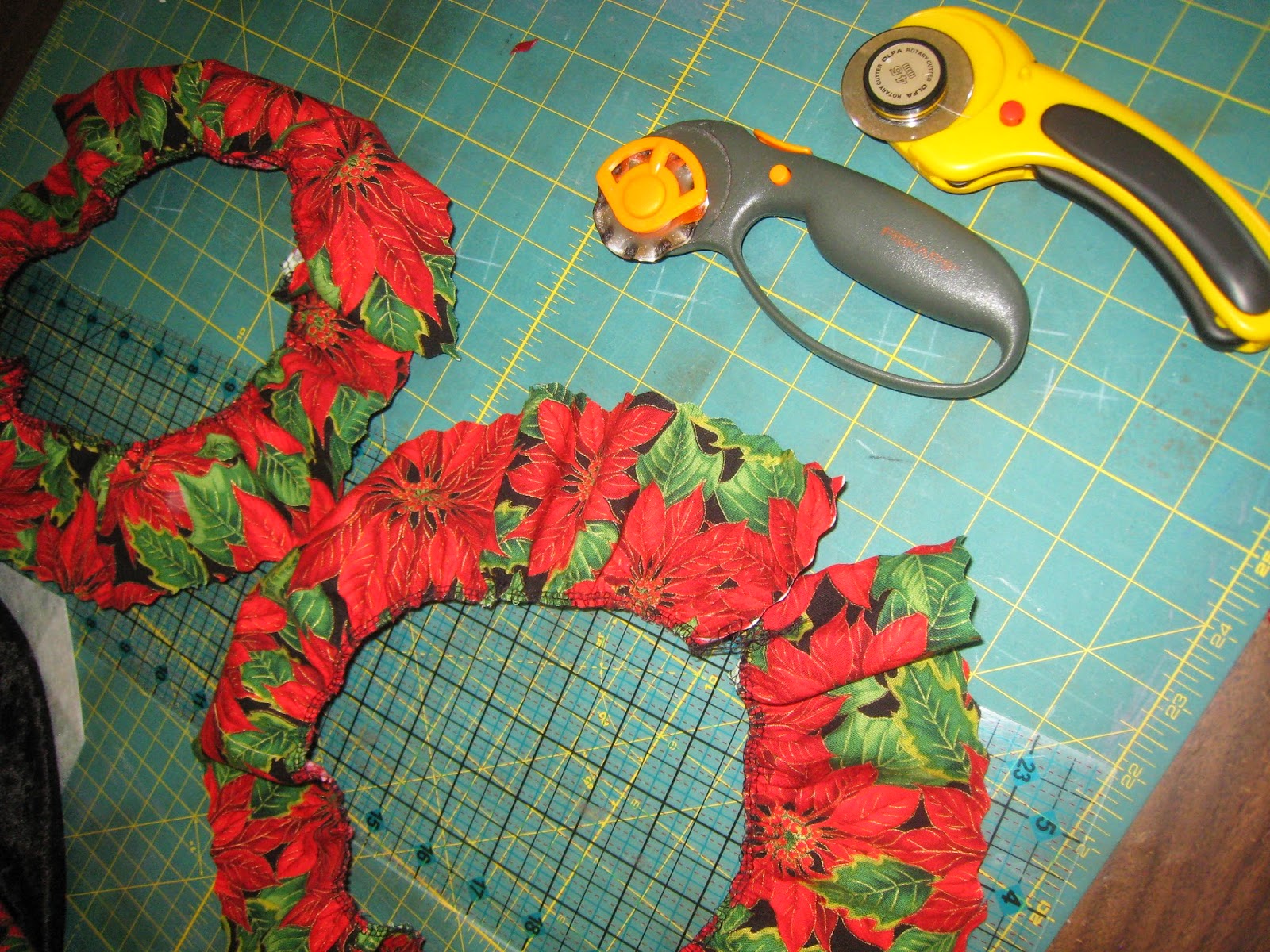 decided to play around with some fabric garland ideas.  Eventually, I want to make some of these, and I swear it isn't just because I want a ruffler--though, of course, I do.  But I'll be making the first ones by hand just to make sure I like them.  However, thinking about it, I thought one could also use the same technique to make large rosettes/flowers for the tree (or maybe centerpieces?).  I couldn't remember how tight I could get ruffles by changing my differential feed on the serger, so I tried out two 3-inch strips to see what happened.  Initially what happened was finding out that I have sewn so little in the last couple years that I couldn't remember how to change anything on the serger, so the serger workbook and I spent some quality time together, and while I did get it to work, to try out the rosettes I'll need to pull them by hand as the above ruffles are as tight as the serger goes.  However, I thought these were rather fun, and am now thinking about lowering the differential feed a bit for a slightly more relaxed ruffle, and making a garland that way.  What do you think?  I used my wavy blade for the outside edges to reduce the raveling, though I could always finish the edges with a rolled edge.  Or I could kick Theo off my ironing board and try the other garland first...........
Posted by Toni at 1:31 PM 2 comments: