Last night--and I can't imagine why this seemed like a good idea even after a martini--I decided to watch an Alfred Hitchcock movie to "unwind" before bed.  Two hours later I was wide awake, shaking like our washer on "fast spin," and squealing "Eke!" at every noise in the house.  So, while there wasn't much sleep, there WAS a fair bit of frightened, neurotic knitting (which works best for lace because you later block the daylights out of it anyway), so.... 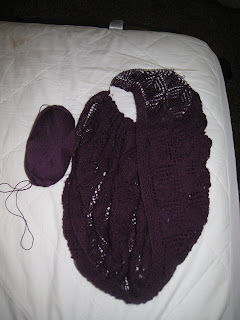 I have finally finished that monstrous 600-yard skein of laceweight and am about 5 rows into the second.  Thank heaven & all the little knitting gods, this shawl will not take all 600 yards of this skein.  I don't think I have the strength.  I don't think Theo does either. 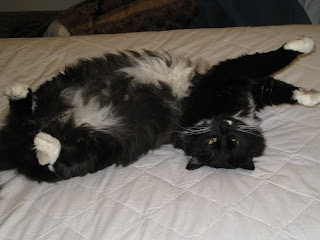 And today's exciting news.....Andy finished the dowel & finials (little end things) for the tapestry, so we hung it in the guest room. 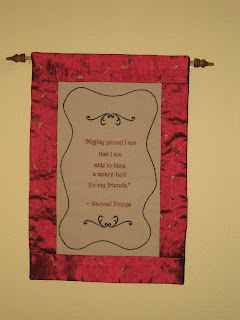 I think it's the picture that is crooked and not the wall hanging, but I'll double check that one after I've had more than a few hours of sleep.  I want to get some decorative cord to ultimately hang it, but I wanted to see it up as soon as possible, and I didn't think I could trust myself at Joann's right now.  I am never more dangerous in a fabric store than when I have recently finished a project, and having recently finished four, I could end up with the entire southeast corner of the store.  I am hoping to find a black cord--maybe with red in it?  I would have originally guessed gold, but that would look terrible against the wall.  And maybe a little silk ivy for a softening effect........?