We ended up with TWO showings of our house yesterday, which is wonderful but stressful. Thankfully they gave us plenty of notice, so we weren't scrambling to tidy and get out the door at the last minute.  As these are the first legitimate showings, we're hoping to at least get some feedback, if not an offer. Still, none to 2 is progress!


I'm so burned out from the house and the horrible job hunt that I am taking today OFF. The stress seems to be getting to Theo as well, as I didn't even make it partway through embroidering a towel before 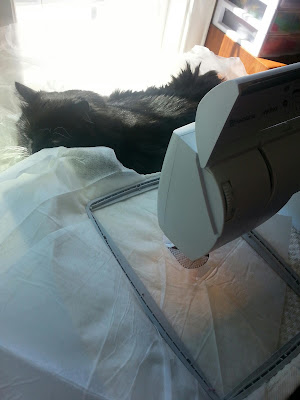 Now this is actually a bit unusual for him as he would normally be laying on the bookshelf in front of the open window instead of in the way of the embroidery machine, but I think we're both a little overexcited about time in the sewing room for once.  All week we've been basically tip=toeing through the house trying not to disturb anything, but if it's going to take a while to sell the house, we need to find a way to live normal lives in spite of selling the house.  Heaven knows when we were looking for a house, we saw houses that had obviously not even bothered to tidy up before we came--though maybe those are bad examples because we certainly didn't buy any of them.  There are still lots of things that probably should be fixed on the house, but aside from missing several of the obvious selling points, I think it looks fairly good in the video tour, even if the colors are a bit strange.  In case you were wondering, nothing in our house actually glows.