I CRAFTED!!!!!!!!!!!!!
To be fair, I did start with a little mending.  Andy had ripped 3 holes in some pant he uses for camping, and my sewing machine actually has a mending stitch, which is really just short rows of stitching side-by-side, which sounds simple but until I saw it, I actually would never have thought about this being a good way to mend anything.  With small holes, it can blend pretty well, but with three big tears, 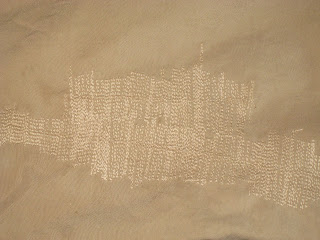 it's noticeable--though perhaps not as noticeable as Andy flashing everyone at a campsite.
Then I decided to tackle some of the quicker projects in my "dead-heat" basket, so meet Niece Fun Fur Scarf #1: 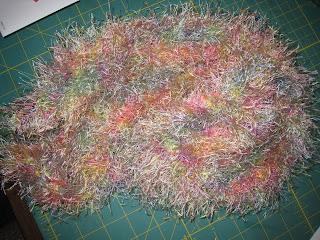 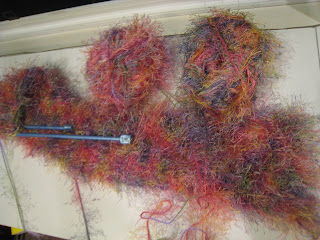 which has to be a little bit longer than the first one as the niece in question is older and taller, and while I had 3 skeins of Fun Fur in the colorway "confetti," no two were even close to the same color, so I'm using two balls on this scarf and alternating balls for every two rows, which slows down the garter stitch rows almost as much as the colossal knots I keep having to drag the two balls out of.  (Note to self:  stop snickering at yarn "bras")

When I needed breaks from the weird sheered-Muppet yarn, I worked on the latest scarf, 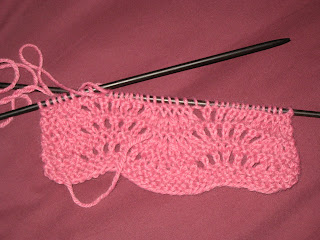 though I wouldn't want anyone to think that I had finished any of the other THREE scarves in the "dead heat" stashdash basket or anything responsible like that.  Nope--I just keep casting on.  Thank heavens at least the purple hat is finished: 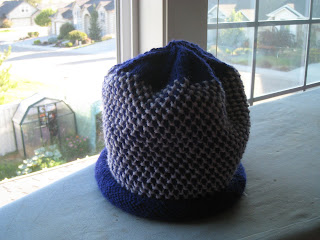