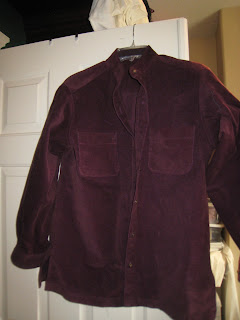 It's the 3-Hour-Shirt from McCall's--which, of course, took the better part of 2 days NOT including cutting and laying out the pattern.  I think they use football minutes.  There was a brief moment of time when I considered trying to embroider something on the pockets, but after the horror of top-stitching on corduroy for the jacket, I just wanted this DONE and off my table.  I went with the mandarin collar 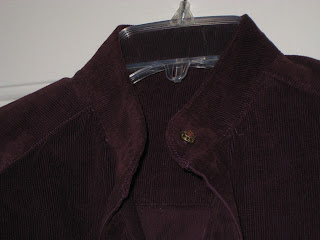 to make it a bit less painful.  I don't think even my nifty new point-turner could make collar points in corduroy.  Instead, I opted to liven up the shirt the easy way--with cool buttons.

In my button stash, 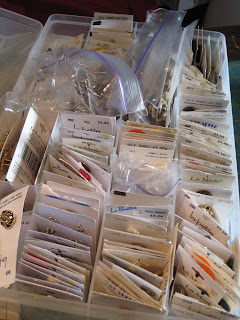 I had quite a few options, but these 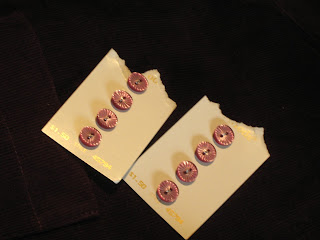 were short one button, so I used these instead: 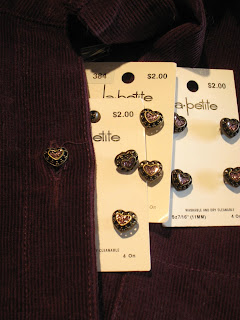 which add a bit of femininity to an otherwise unisex shirt, and are shank buttons which worked much better with the thicker fabric.  And....................I love this shirt.  I already tried it on before washing it, and I love, love, LOVE it.  Thank heavens I'm not buying fabric, because there is a problematical little part of me saying, "You know, another corduroy shirt would be great for winter.............."  Yep.  Totally insane.  Luckily, we're supposed to be entering some crazy-warm weather for this time of year, which will hopefully inspire me to make something for SPRING instead.  Or Andy's Valentine shirt.  Or ANYTHING that isn't corduroy.

The cutting table IS ready to cut out the next pattern, but I decided to cut the spicy spiral runners out first.  Oddly, it works well to have a sewing project and a quilting project going at the same time, so whether I'm in the mood to sew or quilt, something is ready.

Of course, the table runners take a LOT of cutting--especially when 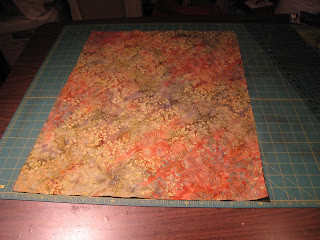 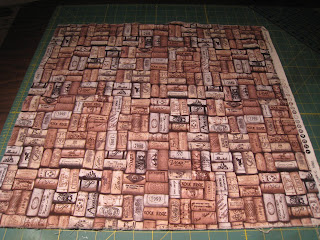 This puts me just over 14 yards for the year so far--STILL not as much as the 18-yard fabric binge, and THAT can't even be close to one of my bigger fabric sprees.  But I'm still on the fabric wagon, and if I can average 8.33 yards per month, I could use up 100 yards from my stash this year and maybe clear up some space in the sewing room.  Heck, it's February--let's pretend it would clear up a LOT of space in the sewing room............