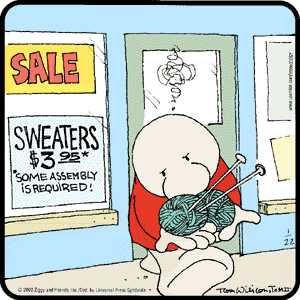 And What We Have Today 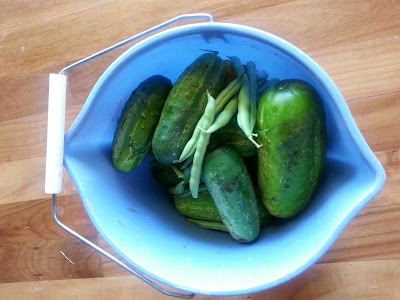 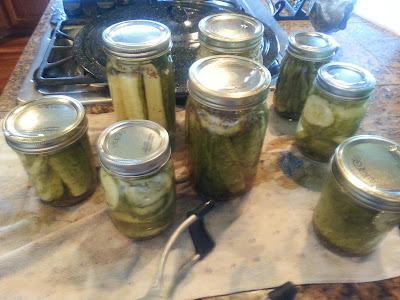 What we DON'T have today:

* any knitting
* any energy left

So, since posting the warning about the site Prabook, my blog has been getting regularly hit by bots from Russia, China, and other countries hot for identity theft.  Coincidence?  I don't think there's anything they can really steal or do, and we're pretty careful about identity theft and that sort of thing, but if there was ANY doubt that Prabook wasn't a totally malicious site, I certainly don't have any now.

So, if you find yourself being given an unauthorized profile, the email to contact them is contact@prabook.org.  Because they won't let you block your profile even if you request it be taken down, I would also report them to your state's consumer protection division in the Attorney General's office, and keep a copy of your request to have your profile taken down.
Posted by Toni at 2:12 PM No comments:

While catching up on blogs last night, I ran across a post on the Sew News site called "Me Made Monday."  I've heard of "Me Made May," and have even thought about trying it, but the timing is just too difficult.  The idea is that every day in May, or on every Monday, one would wear something he or she made.  As a knitter, having the challenge span the entire year would make it much, much easier.  Conversely, I have sewn more summer clothes than winter, so a challenge spanning all seasons would make a lot of sense.

Toni vs. the Eyelets

You know, I feel less guilty about swearing when the project isn't a gift, which is kind of a good thing.  You know those little rings one puts laces through? 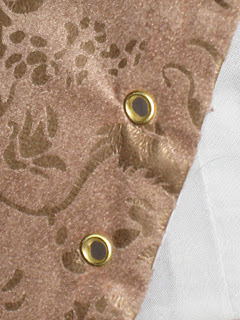 Well, I have a newly discovered respect for their existence now.  Especially the ones without little bits of the back broken off.  I marvel at those.  However, 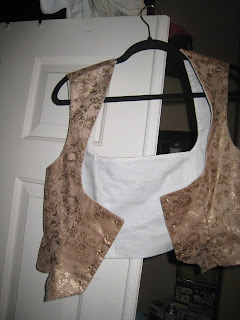 after a couple practices on extra fabric, redoing two of the eyelets, and completely wearing out my hand, 10 of the little monsters are now in the vest and ready for the sueded leather cording I found 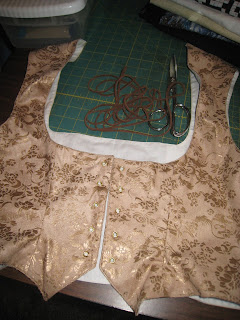 which I thought would look somewhat authentic but which sheds all over everything, especially a white dress underneath.  And now that it is finished in time.....it's really HOT to wear.  It's lined AND interfaced, so I might opt to not wear it after all.  I had a backup scarf plan lined up in case the eyelets didn't work out, and that would be much, much cooler.  We'll see.  When it's over 90 degrees, I'm all about staying cool.  Like with the ice cream, which did NOT make my hands hot......:)
Posted by Toni at 8:25 PM No comments:

It's Too Hot For Sweaters

I admire people who live in really warm climates who still knit.  It's not even officially summer yet, and it's supposed to reach 94 degrees today,  That's too hot to work on sweaters--I don't care how many WIPs I have.  So, 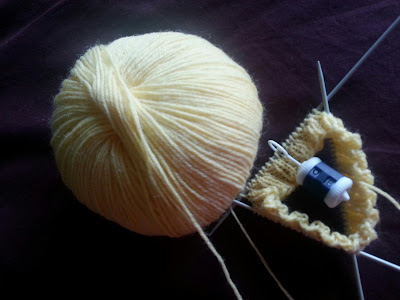 Next week, we'll be celebrating the 60th wedding anniversary of two of our very dearest friends.  Andy is making wooden wine goblets for them, and I just finished 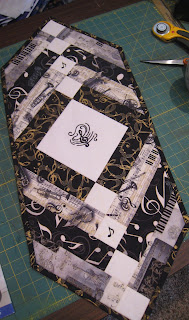 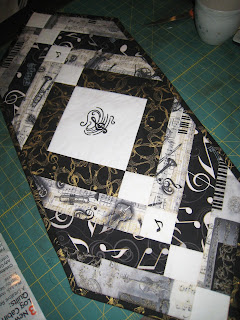 My first attempt at a "braided" quilt!  I'm pleased with how it turned out, but it was a bit of a challenge.  Serves me right for not suing an actual pattern.  I (mostly) used some fat quarters I picked up on our trip to Victoria last year, which I think means I get to count it as planning ahead instead of "impulse buying."  We'll save that title for a few of my OTHER purchases.

That makes project 63 for the year, which is ahead of schedule for 115 Finished Projects.  And one of the last projects with a real deadline, so maybe after finishing the costume I can pick a real stash-busting project.  Though, with the size of my fabric stash, that might take an entire new wardrobe..........:)
Posted by Toni at 2:03 PM 2 comments: 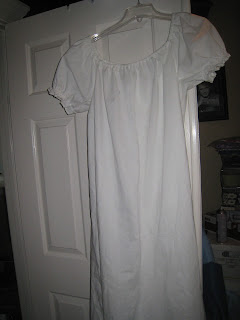 Shocking, I know--a post AND something actually finished!  I'm making this: 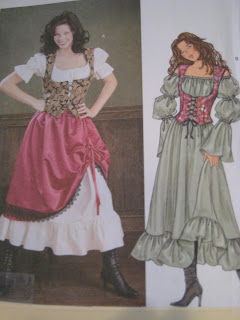 for a potential Renaissance fair coming up, and since I knew I had 20+ yards of white fabric, it seemed a good pick.  A really good pick, since I think it will be too hot for anything except cotton.  The dress is done, and the vest 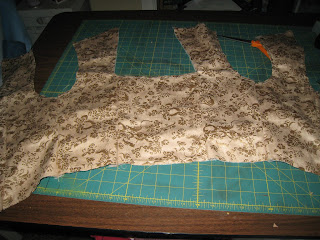 is progressing!  The pattern suggested cotton as a potential lining, so I'm using the stash of white cotton for that as well.  Let's say I'm doing it because I thought it might be cooler and NOT because it means that I don't have to locate anything else in the great fabric abyss sewing room.  I'm now ready to sew the vest lining to the vest, so more than half finished.  Then we'll be learning how to attach eyelets.  I'm not sure what to think of a new technique that comes with its own pliers, but I have many scraps and will be doing several practice runs first. Not exactly clearing up shelf space with this project either, but maybe if I make a few MORE clothing items, the sewing room might start to be a bit less overwhelming. 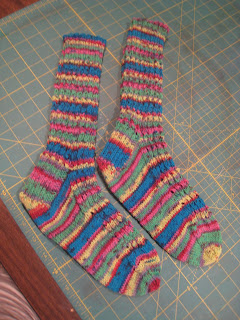 will make all the difference.  A new pair of wool socks for me finished today--just in time for a projected 92 degrees tomorrow.  Whew--just in time!  :)  Seriously, this is so hot so early, it will be interesting to see if the garden survives--or puts on any fruit.  It would be so sad to have two summers without many tomatoes, though it would leave more crafting time in September...........
Posted by Toni at 7:23 PM No comments: 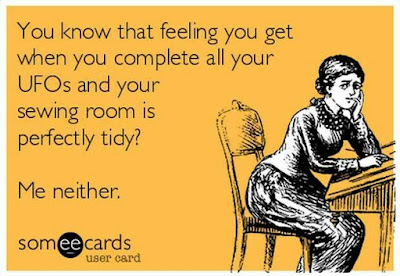 I blame the recent lack of blogging on Real Life, which never seems to adequately understand the need for crafting.  BUT:

1.  The garden is almost completely in!  There are a few tomato plants that got a late start which I will still plant.  Thanks to global warming, we're getting EXTREME temperatures around here in the summer (having already reached 90 once in May, which is unheard of), so if the heat strikes tomatoes at the wrong time, they cease fruit production.  So I've been staggering my tomatoes in ago, so when we get 110+ degree temperatures this summer, some of them will hopefully keep going.

2.  The last of the sparkly yarn I ordered back in December has finally arrived: 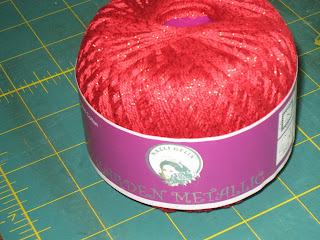 I'd finally given up and deleted it out of my Ravelry stash because in my experience, being on back-order for 5 months is generally a sign it's really never going to arrive.  But, it did!  And new yarn arrived in my house without me falling off my sheep!!!!

3.  I may have met my match on embroidering.  This: 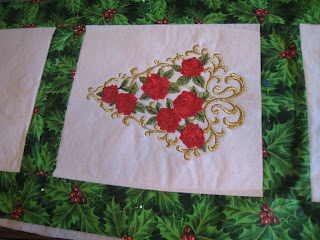 while just about the loveliest design I've ever seen, took HOURS--even by machine.  The sewing machine that was "a lifetime investment" and which actually got all new circuit cards a few years ago still struggles at times, and while stitching out the metallic part--which is never easy to begin with--the machine stopped every few stitches to tell me it was out of thread.  It wasn't, of course, but I think the new cards (made after VSM bought Husqvarna, Pfaff, and Singer and ruined all 3 brands) are probably going out.  So, one freakin' design took until after 11:00 PM to finish.  ONE. So, 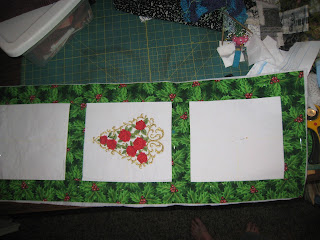 what do I do in the other two panels?  My original plan was to do the same design in all 3, but that is SOOOOOOOOOO not an option any longer.  Andy didn't think it looked Christmas-y,  but I think it does, so I was thinking simpler designs of some sort in the other squares.  Maybe something with roses or trees?  When I'm ready to work with it again, that is........

4.  Impulse yarn is always a bad idea.  Last year after stepping off my sheep, I bought some self-patterning sock yarn to play with, as well as this: 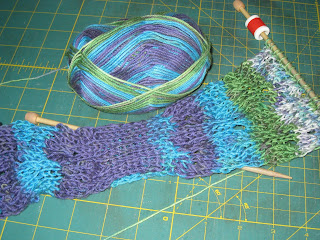 which I mistakenly thought was the same yarn.  It isn't.  It's a sportweight microfiber yarn, and a doctor once told me (as he was freezing a planter's wart off the bottom of my foot using a 5-inch-long needle) to never wear synthetic socks.  I may not always follow doctors' orders, but when they're associated with large stabbing implements, I do tend to pay attention.  So, not for socks.  It is REALLY soft yarn, so I made a little scarflette with it.  A striped scarflette--with a lacy pattern, no less.  I never learn............

5.  Depending on how you look at it, I successfully mowed the yard on Monday.  Or most of it.  I made it through the front yard, but I only made it through some of the back yard before I hurt.  It has taken 4 years, but I have actually learned to stop doing things when they hurt.  Shocking, I know.  So that part was successful.

The problem part is that I've spent the last two days in bed on the heating pad to pay for it.  To be fair, the lawn is actually mowed, so I really did do it......but it might be a while before trying that little stunt again.  Tuesday even involved full medication--which did wonders for my appreciation of the striped scarflette's color scheme.  Yesterday was a bit better, so I started some new socks for myself: 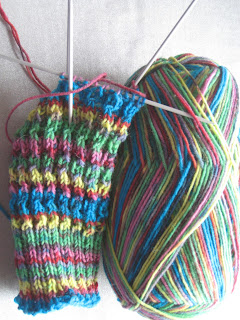 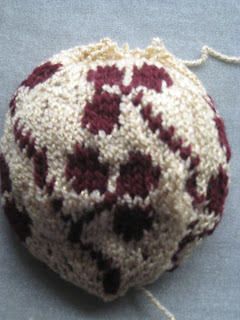 finished a color-work ornament!!!!!!!!!!!!  I think it might have been started back in January, which probably averages out to about 5 stitches per day or something idiotic.  Remember that goal of finishing 3 of these this year?  Meet number 2: 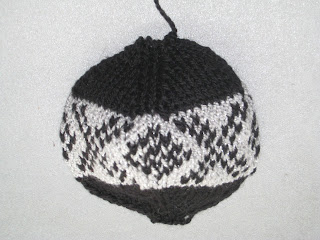 which I finished this morning.  I think this is now the third one from this pattern.  The nice thing is that much of the ornament doesn't involve two colors, and the floats aren't that long.  On some projects, "catching" a float longer than 5 stitches works, but that shows up on these, so it's actually best to just skip them and stuff them very carefully.  But to not have them at all works best of all. And since I mentioned 3 as the goal, 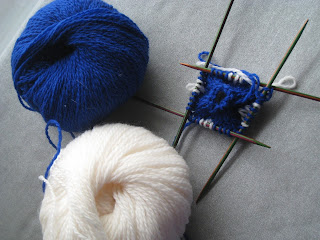 6.  Remember that other goal of trying a "braided" quilting project? 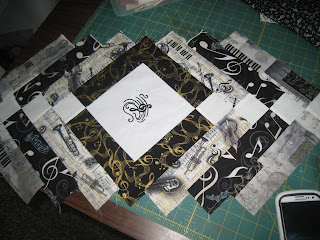 Ta-da!!!!!!!!!!!!!!  It's a bit smaller than I had intended, even for a table-runner, but the only other music prints I have don't work.  I was thinking of embroidering small music notes in each of those white squares, or would that be too busy?  I'm going to quilt it with stitch-in-the-ditch in gold thread, which will add some shiny but not add to the busyness.  AND, I started to order more fabric for this at least 3 times, but I held firm!!!!!!!!!!  The fact that it's an anniversary gift and needs to be finished by the 25th might have had some influence, but I have bought fabric on flimsier excuses.  I'll use the black and gold print for the binding to tie it all together--and it's the only one I have enough fabric for.  I know people love fat quarters, but full yards are SO much more versatile.  Which again might help explain the size of the fabric stash......