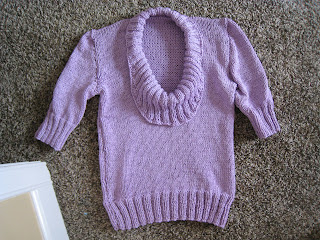 It should have been finished quite some time ago, but this 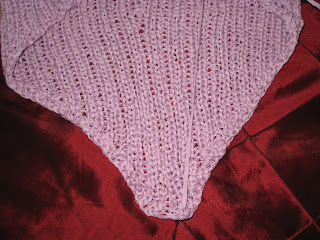 stopped me.  Nope--it is NOT a ribbon loin cloth, in spite of what it looks like.  It is the original cowl neck. 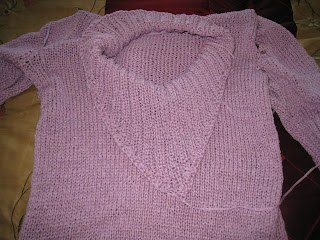 which I think looked pretty dopey.  It was possible to stretch & stretch the neck into being a bit more rounded, and I seriously debated about making myself go through the hassle of mangling it every time I wanted to wear it, or to grow a spine and just fix the darn thing.  Since the sweater has been languishing in the WIP pile for quite some time, you can see what a difficult debate this was.  Blame it on the short rows--which in general I think are just darn clever.  Tinking them, however, is about as much fun as elective root canal without anesthesia.

I decided to watch some old sewing television shows I had taped (back before the digital conversion stopped me from even knowing how to operate normal television, much less being able to record shows anymore), and there is a VCR in our guest room, which was sunny and lovely today.  Theo did agree to join me 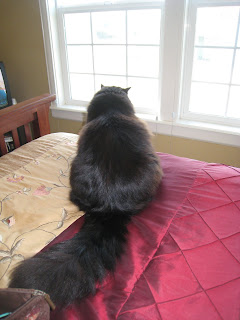 but wanted to make it quite clear that he disapproved of the new arrangement.  I made it through three sewing show segments before getting bored, but Theo only made it through one 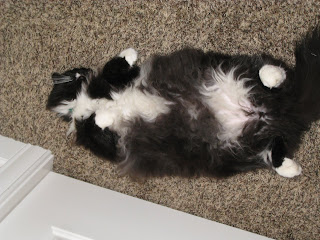 Unless I'm interested in the project or technique, they are pretty boring.

It's still early, so I'm thinking about picking up this: 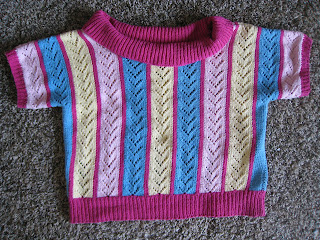 to work on this evening.  It's probably the third or 4th sweater I ever made but I never wear it, because while it came out looking very much like the picture 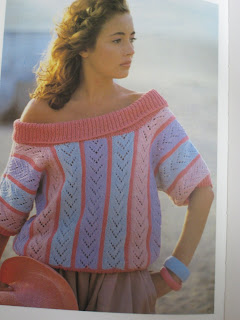 what was omitted was the picture the split second AFTER this picture was taken, when the weight of the COTTON yarn pulled the sweater completely off her shoulder and turned this into a pornographic photo shoot.  SO, what I think I'm going to do is to rip out the neck and redo it--making it a bit smaller.  It won't be off the shoulder, but I won't be flashing anyone either.  I think that's best.

NOW, the big question is.......is that a "project" or just fixing a project that counted for the yearly tally for sometime in the late 1980s?????