I got up bright & early this morning to find my little side-kick just waiting for some sewing time. 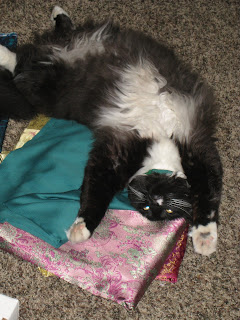 I've been anxiously waiting as well, but my waiting is just not that cute.  I'd cut out a jacket while Jeeves was gone, and just put the finishing touches to project number 52 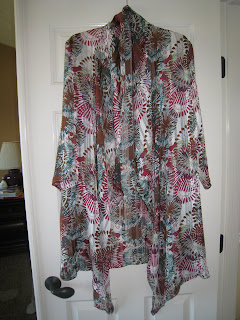 Here's an important lesson:  Under any other circumstances I would never have finished this jacket.  The material--while it will be totally fun to wear--is so light that it was a nightmare to cut out, and I only managed to finish the narrow hem around the ENTIRE jacket by utilizing all my pins as well as scotch tape and; a fabric glue stick that I REALLY hope is as water-soluble as it says it is.  Luckily, I was so excited to be able to sew again that I didn't even swear while making it--which Andy will tell you is a really remarkable feat for me, if not an absolute first.

I would have started sewing last night, but there were a few technical details to attend to.  Know what this is? 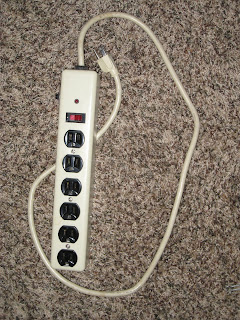 This is a power strip.  NOT a surge protector.  I realize I may be the only one on the planet who didn't know that, and that may be what caused poor Jeeves to fry a circuit board 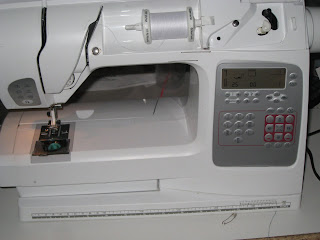 though I might have just really irritated him.  At any rate, this 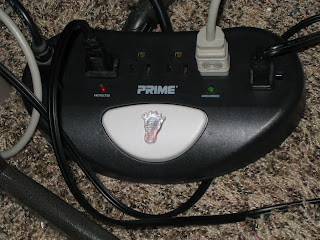 really IS a surge protector, complete with a little foot switch, which Andy says will be good in case of storms.  We're having a lot of severe storms here so far this summer, so I didn't want to risk running Jeeves until we had a real surge protector, so that's why there was no sewing last night.  Instead.... 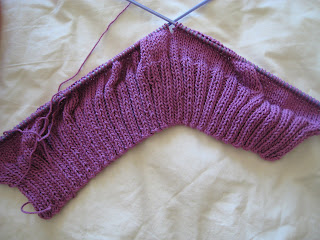 A new baby sweater!  Andy's sweater is getting a bit long for really portable knitting, and nothing involving beads is portable, so I decided to cast on for a Baby Reefer Jacket.  I'm knitting the front & back pieces as one, and as it's mostly stockinette it is going rather quickly.  I LOVE projects like that.