To get my new sewing desks back from campaign work, 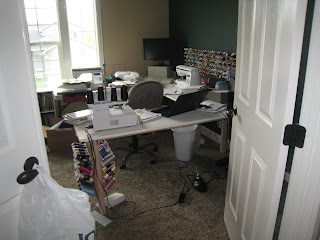 I am cleaning up the back bedroom to make is into my office.  I'd show you pictures, but it's even worse than the sewing room and I'm just not quite ready to share THAT in public.  We've been in the house almost 6 years now, and at first it was just the room with boxes that weren't unpacked, then when Andy put shelves in the sewing room closet, it was where we stored everything and almost everything made it back into the sewing room.......but maybe not all.  Then I've cured the garlic in there a few times, and there might be a few boxes from the wedding still.....

Ahem.  So, we're slowly moving the wire shelving that was in the sewing room back into that room for temporary storage, and as I get things sorted--put away or given away--I'm hoping to free up enough space for Andy to build another temporary desk for my campaign consulting in there. I'll never really enjoy cleaning, but there is some motivation to get my sewing room back.......and I did handle it better than Theo. 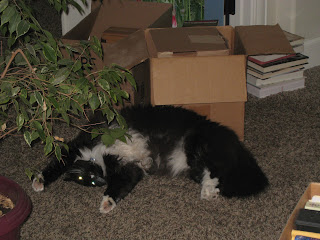 He just doesn't handle cleaning at all.

I was very pleased to find some crafting stuff that I knew I owned but hadn't seen since the closet move, and was delighted to find this: 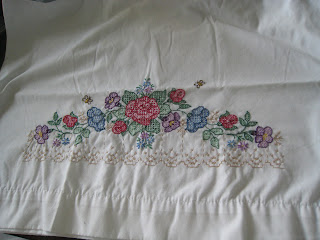 This is NOT the stamped cross-stitch pillowcase that was in a project-of-the-month bag a couple years ago.  Nope, this is the FIRST one, which has been finished but missing for at least FOUR years.  Now if I can locate the SECOND one, I finally have a flippin' matched set.  Can you believe that actually doing the cross stitch was the FAST part of this ordeal?

So, you can imagine my amusement when I found it was not alone: 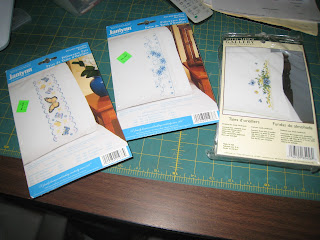 It has friends!  And one of them even has thread: 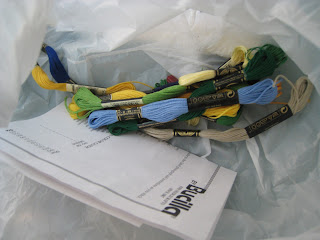 which is good, as I was definitely in the need of a slower hobby than knitting..... 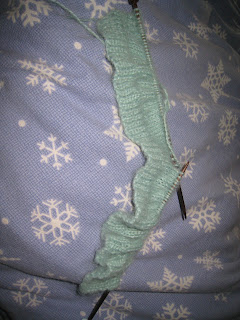 the baby sweater--which my new photo editor insists must be sideways--has two sleeves ready and waiting to be joined to the body for raglan shaping.  So far I think knitting the body in one piece is going well.  The button holes of the first one are a bit wonky, so I've remeasured and put markers on the first sweater for the locations I would have liked the button holes to be, and will be using that to hopefully do a bit better with this one.  I do have ONE meeting for work tomorrow AND a speech to write before noon on Saturday, but in-between all of that, there could be some serious knitting.  A third sweater done by April 30????? 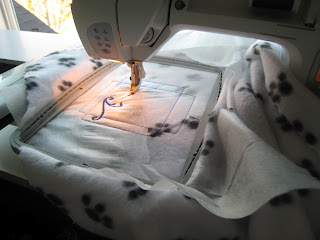 before Theo could get to them, and they are now with their new puppy owners. 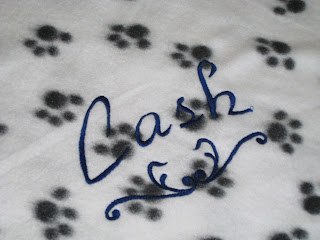 It's hard to get embroidery to work well on a busy print, but they're fun anyway.  Theo is simply appalled at my behavior, 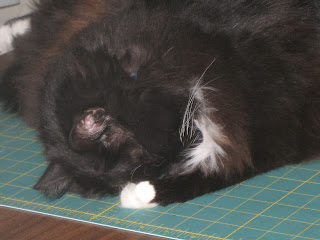 Not much knitting tonight, but I thought it was time for an update on the sewing room shelving.  These are not going to be just ANY shelves. 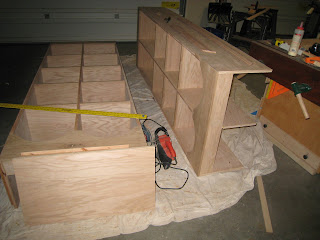 They have this cool arch thing 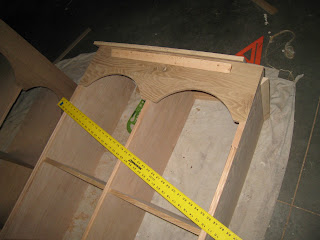 which will even have a light 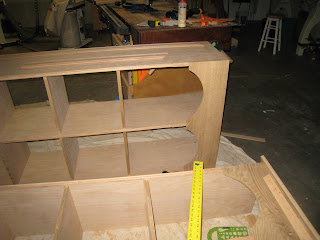 and these cool scroll work thingies in the center of each shelf: 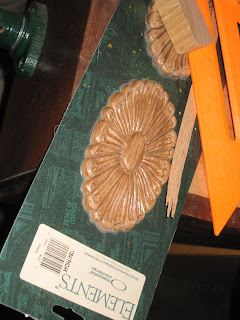 If the finished shelves don't finally shame me into keeping my sewing room tidy, I don't know what will. 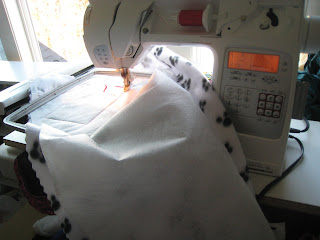 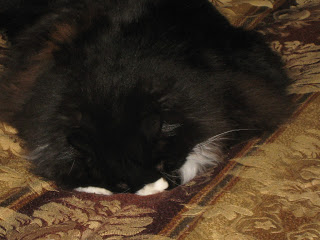 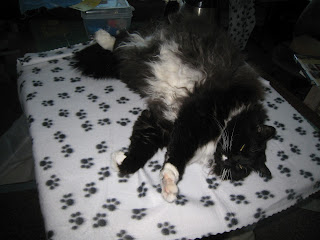 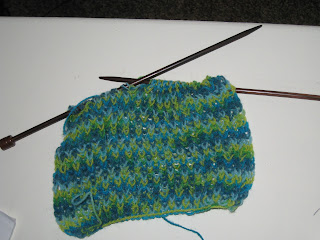 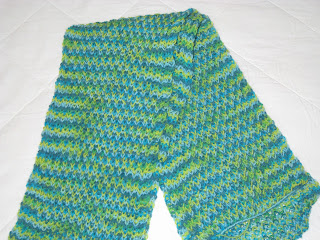 which I didn't think I would get a chance to do, but Andy and I got sucked into a movie and ended up staying up MUCH later than we intended.  Having the television on helps me fall asleep because it interrupts my thought patterns and helps me disengage, which reading doesn't do--not even the most boring books.  Movies usually work (unless they involve screaming, explosions, or music, which are luckily never combined in a single movie), but I'd borrowed "The Reader" from the library, and for the first 30 minutes or so, I thought it was perfect as it seemed to be a retelling of Lolita which I wasn't finding riveting, but then we got sucked in, and I even had time to cast on a sleeve for the next baby sweater 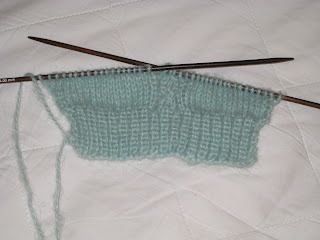 before the movie ended.  I decided to start with the sleeves so I could knit the body in one piece and join it all together for the yoke--and because I didn't think 11:00PM was a great time for me to be trying to make pattern edits in my head.  Needless to say, 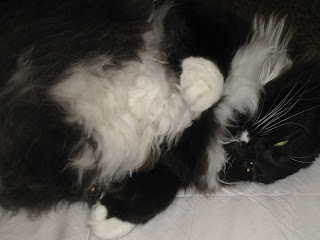 we're all a bit tired this morning.  Though not too tired to get out the swift and ball winder, 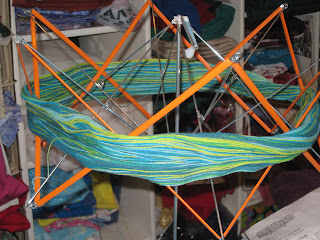 True, it isn't a sweater, but right now when I can only do little bits of knitting here and there and need to concentrate on other things, I'll knit what I can and work out the details later.  As soon as I get the rest of my knitting books unpacked, I've got yarn set aside for Elizabeth Zimmermann's Tomten jacket, which looks like a lot of mindless knitting and will make a nice addition to the gift bin....or be a great Christmas gift if I don't get the baby aran done in time......
Posted by Toni at 8:03 AM 2 comments:

......very, very simple knitting.  Something that requires no thought, no pattern, and can be picked up and put down in a flash.  So.... 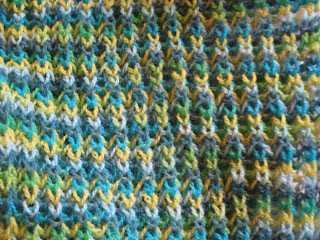 there is a new scarf on the needles.  It's a free pattern called Lacy Brioche, and it's just one row over and over again until you can't stand it.  Combined with a variegated yarn, it's like the knitting equivalent of a lava lamp--soothing, subtly changing, and very pretty.  It's working so well with the variegated lace weight that I see another one of these in my future as well...........there's a slipped stitch effect in the pattern that stops the obvious pooling that so often happens with variegated yarns.   Thank heavens--I had originally purchased 4 hanks of this yarn thinking I would make a shawl BEFORE realizing that I hate the way variegated yarns look in shawls, so it's nice to find patterns that work in this yarn.  In spite of the puddling problems, I do love the colors of this yarn and would never have been willing to sell it.  The scarf, however, will find it's way to the gift bin............I think............... 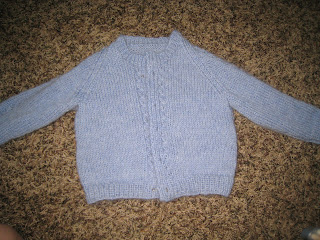 Sweater number TWO is done (except for buttons, which I'll find when I get the sewing room put back together), so now I'm only about one and a half sweater behind.  That sounds better, right?  I'm going to work on the collar and band for the blue sweater 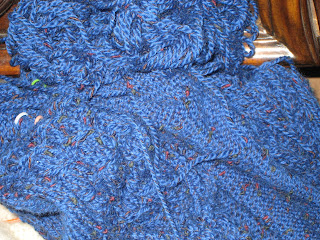 which is down to just the bands and a few seams.  Maybe finishing this and another baby sweater will get me back on track.........?
Posted by Toni at 5:45 PM 2 comments:

Even though I ended up having to work most of yesterday, I did manage to finish the current lace scarf,