Okay, maybe it just feels like that. Though they don't call that one the "spicy" spiral runner for nothing......

In a rare feat of being ON TIME, I finished a gift for this weekend, 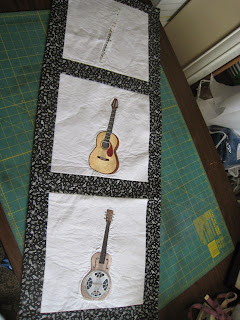 and after 4 hours spent machine embroidering that center block, I have found that piecing is NOT the slowest method for a table runner ever.  That would be 3 guitars.  It does have a few issues, but don't we all?

In my little episode with the credit card and some clearance embroideries, I actually did display SOME sense, and found a "magic" set, 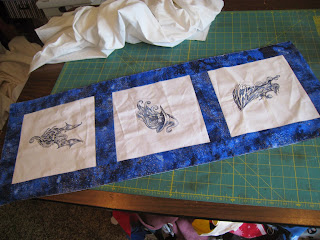 which we thought would work for our niece and nephew who are into the game called "Magic."  We did briefly debate whether or not a table runner was appropriate for those in their 20s, but they generally don't thank us for anything ANYWAY, so we wouldn't know if they have liked ANYTHING we've given them. 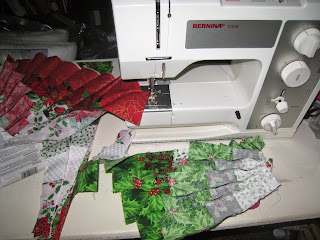 The third and final (of this color scheme) spicy spiral runner is cut out and underway!!!!!!!!!!!  After a reasonable break--which will probably involve the cutting out of large, space-consuming pieces of fabric and the attempted sewing of clothing--I think I'll try some in fall colors.  I love the Christmas colors, but it's May and I am planting flowers!!!!!!!!  It's just a bit difficult to get excited about holly and snowflakes.

And my heating pad project the socks are moving along at lightning speed, 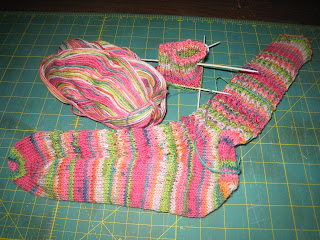 or at least lightning speed for something on itty-bitty needles.  WHEW!  I won't know what to do with all the room freed up by that one ball of sock yarn.  Oh my!