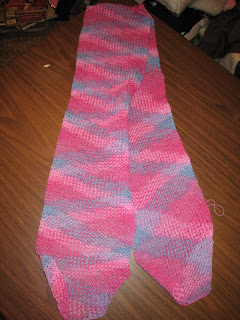 Whew, that's a lot of yarn!

And of course I celebrated by casting on this: 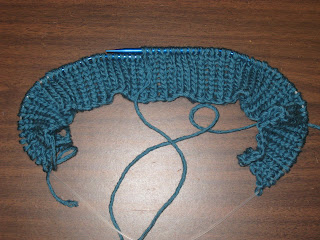 which will eventually be a sweater, but most importantly, it's on size 9 needles and it's a bulky weight yarn with 87-yard skeins. Hey, with 2 days left in the year, I have my priorities....

Some close-up shots of the lace pattern: 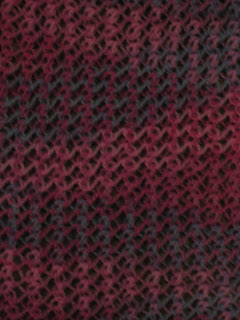 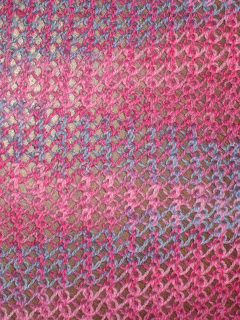 I used a size 5 needle, and using a cable cast on for a little more stability, I cast on 50 stitches with Knitpicks Gossamer laceweight. Then, starting on row one and repeating on every single row, I did (YO, K2tog) across each row. It's a faggoting stitch (every stitch either being a yarn over or two stitches worked together). Since I was essentially "knitting" every row, I didn't add an edging as I didn't think it would curl, but oddly enough, it has a bit of a corkscrew effect.

If I were to do it over again, I'd probably add 3 stitches of seed stitch on each side as I did for this one: 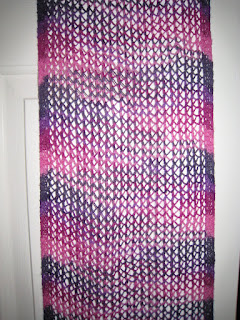 I love the openness of the pattern and it's perfect for scarves because both sides are identical.

My trusty sidekick spent the morning with me 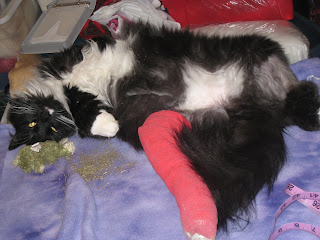 His big excitement this weekend: Outings to the back yard! They're short and thoroughly supervised, and we keep him out of the snow, but after 6 days of that horrible cherry medicine--and 4 still to go--I thought he needed a little treat. We've kept this cast for almost an entire week now, so I think the vets might finally have outsmarted him. Then again, we still have 7 days to go...