Sometimes I Amaze Myself......

It's possible that starting the Project of the Month bags next month probably wouldn't have killed me.  However, since I didn't realize that until it was too late: 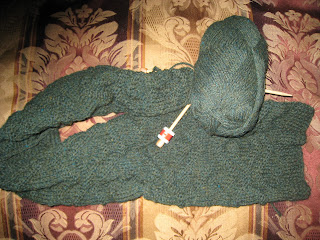 there has been some serious knitting going on around here.  I think it might take the entire second ball of yarn, but that still means that I'm more than 50% done.  And what did I decide to do with myself today?

This one really isn't my fault, though.  Two years ago, we redecorated the guest bedroom when I found this bedspread: 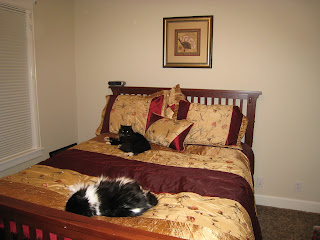 We've even painted the walls a nice gold color to coordinate with the bedspread...and cat hair.  It wasn't the most expensive bedding ensemble, but it wasn't cheap either, so you can imagine my joy when several of these 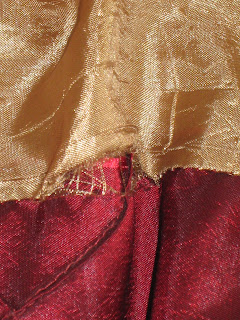 popped up.  One of the fabrics was really a drapery fabric, and it was ripping out at every seam.  I tried for a long time to come up with ways to patch it without it either looking bad or continuing to rip out, but  it just couldn't be done.  So in November I found this 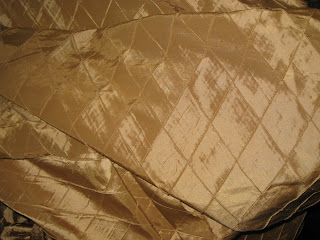 at Joanns.  It was thankfully on sale, and it not only matches, but has some visual interest via the pintuck diamond design, which also reinforce it just a bit.  Having the new material, I was just lacking the courage to rip the comforter apart--and here would be a good time to mention that I've never made a comforter nor repaired anything even remotely similar--but today I was a little miffed after some friends cancelled a SECOND dinner date with us because they wanted to watch football, so ripping something apart seemed like a darn good idea today.

I am encouraged by details such as this: 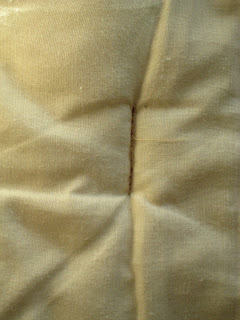 which are the cheesy way that the manufacturer "quilted" the batting in place.  These little 2-inch "tacks" weren't even on the seam lines.  They were just randomly anywhere.  Well, I think I can do visible little tacks as well as anybody, so my confidence grew, which is good, as it only took half of The Sound of Music for me to go from this: 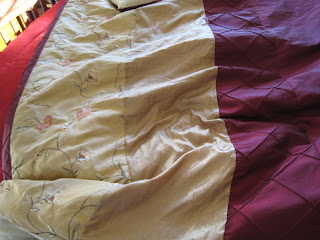 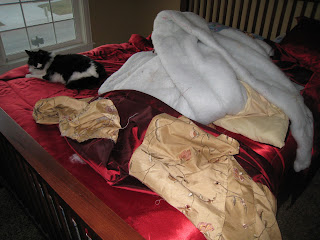 I actually only have to replace two pieces, and it came apart easier than I anticipated because in spite of the high raveling factor of the fabrics, none of it had been serged.  Tomorrow I'll cut out two 12"-wide pieces and begin the process of trying to put this thing back together.  I'm guessing it might take a few more movie musicals to get me through the "reassemble" phase.  These things always seem to work that way.

In other project news, I had cut out a pink "jeans" jacket during one of Jeeves's long sojourns in the repair shop, and since it was already cut AND marked, I decided to start putting it together.  The pattern has ever single seam sewn 3 times--one regular seam, then edge stitching and top stitching on the front.  I've done 4 pieces: 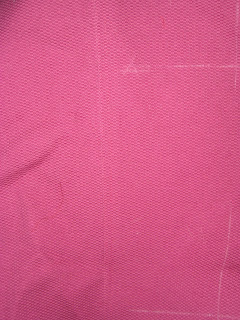 and have decided that I need to change colors for top stitching.  On the good side, the thread I have matches really, really, REALLY well.  I'm thinking white thread, then embroider some white flowers on one shoulder and at one waist.  I considered black, but also in the stash I have some black and pink suiting that could make a really fun jacket, so this one can be white and pink.  Rather than keep changing threads, I think it will be easiest to set up two sewing machines and switch back and forth...which will now involve getting the cutting table cleared off...which will be easier if I cut out the fabric for the bedspread first....which is why I'm off to work on that scarf some more.......