I AM DONATING YARN! 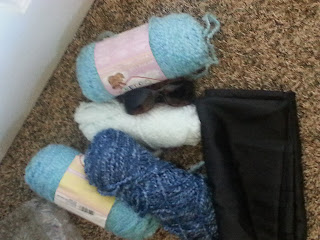 Alright, to be fair, it isn't a LOT of yarn and I didn't actually remember having it, but I'm donating it nonetheless, and as it's bulky yarn, it actually DOES free up some space.  AND that is another 5 yards of costume satin sitting there beside it.  I may not have much crafting time this year, but at least the stash is shrinking a little.

It turns out that filling a pod storage container is like a giant game of Tetris.  Because it's going to move, things have to be securely stacked and tied down and they can't shift around, so today my project is to pack some smaller boxes because we need some filler.  I think it might work better if we were storing more furniture, but we really don't have that much furniture.  My parents have so thoroughly overcrowded every room they have with furniture that I've always tended the other direction.  We've decided to store most of our bookshelves to stabilize our boxes in the pod, but we could have skipped that.  Originally I hadn't planned to remove photographs from the wall, but our realtor said he has actually had people looking at a home who looked at a wall with pictures and honestly asked him, "Where would we put OUR pictures?"  Bless his heart--he was able to tell them that he thought the owners were planning to take their pictures with them without laughing, but I guess it's best that we remove them as one never knows, apparently. This is why, even with a background in sales, I have never once been tempted to sell real estate.  I don't think I could answer questions like that with a straight face.  :)