Progress, But No Knitting

After three attempts and much swearing, I am finally finally FINALLY putting the edging on Fleur in the right place, in the right way, and unless it spontaneously combusts--which I don't think cashmere generally does--I may actually get the darn thing done.

I think in a small act of atonement, the edging is actually laying flat this time, 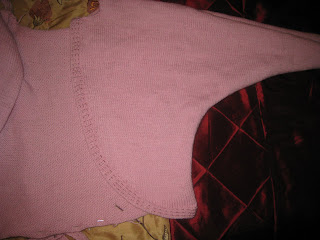 so that has improved my knitting mood somewhat. The edging strip is a little longer (12 inches "little longer") than necessary, and I'm debating whether to rip it back, or simply cut the darned thing where I need it. This would be a VERY big thing for me, as I am not generally a cutting knitting sort of person. More of a cut-that-knitting-and-there-will-be-bloodshed sort of person, if truth be told, but I always hope that I'll experience Personal Growth while knitting. And then I wake up.

I also finally admitted that I had gone a bit overboard on the back of this toddler sweater: 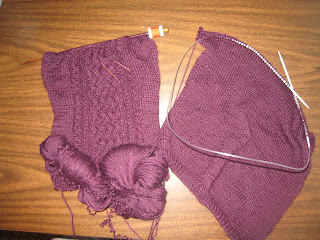 being at least 3 inches PAST where I should have decreased for the arms. That's the danger of stoplight knitting--I'm in it more for something to do rather than achieving anything, so even though I suspected that I might have gone a little overboard, I didn't stop knitting because being able to knit at stoplights is really, truly, and end in itself. Like Penelope, I could probably rip back my knitting every night and still be happy. Granted, it would be stupid, but that generally doesn't phase me while knitting.

In spite of my efforts to recruit people to the fiber side, most of my friends do not knit (though they are lovely, lovely people in general) and we are about to embark on a socializing episode that is extreme even for me, so there may be a general lack of posts--and knitting (sob) for the next few days. But at least I won't be casting on anything new!!!