Two Weeks Down, Four To Go

When they said it would be 6 weeks to recover, I don't know exactly what I thought, but I know I expected to really be able to do almost everything. Obviously, I have been choosing to live in Fantasy Land.

I'm doing better every day, but I now believe that they really mean 6 weeks. There has been one more dish cloth, because these circles are addictive 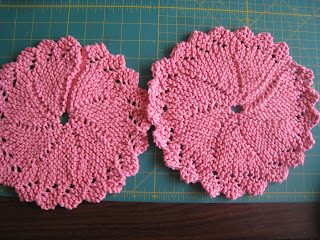 and it used up the last of a big cone of cotton, which makes me feel good in the STASH PROGRESS sense.

The shawl for my mother is getting the most attention: 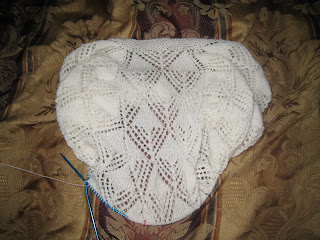 though has lost out 2 days running to reading murder mysteries. I would never have believed it, but I really can't knit all the time. The baby blanket has gotten some attention 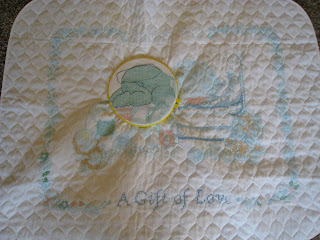 though it still doesn't look like I've progressed much. I have discovered the key to needlework:

After this it will be back to pillowcases & smaller items.

I have altered my 10-in-a-row sewing regime just a bit. Because I'm not always able to sit up for long periods of time, regular sewing is still a bit too difficult (though I have high hopes for tomorrow). The embroidery machine can work by itself, so 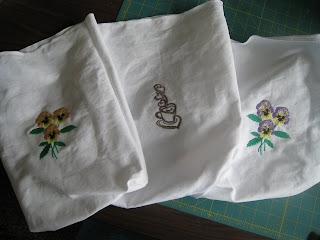 My sidekick continues to take good care of me 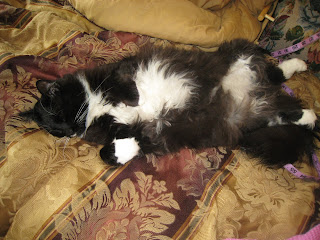 though in all honesty I think he's getting a little bored with my inactivity. He meows at me in a rather exasperated tone before curling up with me, so I think even he thinks I've taken this napping thing a bit too far. Soon.....very, very soon........

Then it's back to that dress!