....but things reached a desperate point today.  I had some time for sewing today, but things had reached SUCH a point that.............I had to clean the sewing room.

I know!  And perhaps I should have suggested sitting down first, but it might lessen the shock if I assure you that cleaning the sewing room isn't the same thing as the sewing room really BEING clean.  That really would be a shock.  But I did put a lot of things away, dusted a great deal, and threw away scraps of fabric, interfacing, and stabilizer.  For me, that's huge, because little bits of interfacing or stabilizer are IDEAL for buttonholes and other little projects, but 1.) there's still plenty of scraps around, and 2.) they had cat hair on them.

It all started with this: 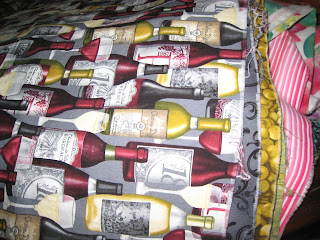 which are the washed and ironed fat quarters of this little incident in August, 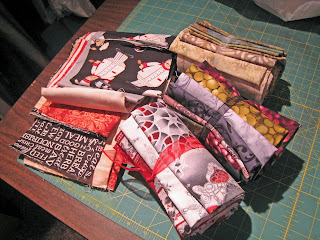 which, again, are not part of the 18-yards end-of-the-year "hurrah" my Visa and I had.  The chef set has been used, but I've been moving the rest of them around the sewing room ever since, so the batiks and wine sets are washed, ironed, and ready to be made into Spicy Spiral table runners........which is when I discovered that I didn't know where the pattern was........

Lest you think I gave up easily, I decided to switch projects, and since back in September when I was young and naive, I had cut out a corduroy shirt for me along WITH the jacket-from-hell, I have been moving the pattern pieces around the sewing room for a few months and decided that it might be time to actually sew them together.  However, I could only find one of the instruction sheets (out of 4). Alas, there was no hope for it and my cleaning fate was sealed................. 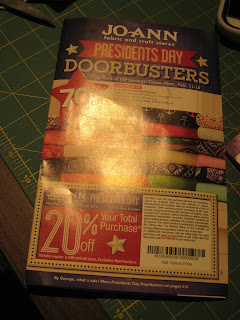 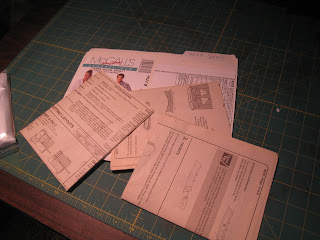 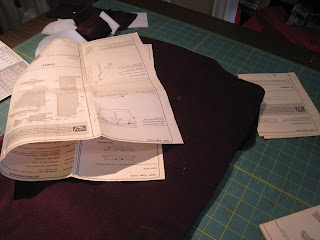 I have located the instructions, the pattern pieces, AND the extra fabric because I managed to cut ONE of the yoke pieces instead of two, but if I finish this shirt, I'll have another 2.375 yards of fabric used up from the stash, and pretty OLD fabric at that.  While I know this isn't the only BOLT of fabric I had in my stash, I am rather hopeful that it is the only bolt of corduroy I was foolish enough to buy.  AND I found my Spicy Spiral pattern, so I have one ready-to-sew project and fabric to cut when my back needs a break from sitting.  And I am CLEARLY not stupid enough to be topstitching ANYTHING on this shirt........