The brioche scarf is now done: 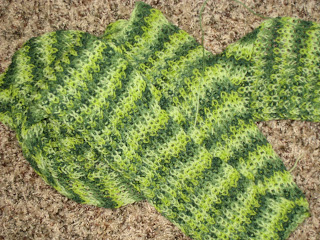 and with it's 440 yards of yarn, I have now achieved my second-highest yardage in a year with two and a half months to go!  And--even more encouraging in many ways, this yarn is all used up from my stash!  In a fit of madness obsession with variegated yarns, I ordered 4 HANKS of this yarn in either 2006 or 2007.  Call it a "youthful indiscretion," or, if you'd like to include the other 18 hanks of variegated yarns I also acquired around that time, call it "complete idiocy."  I am happy to say that even I came to my senses and realized that variegated lace yarns have never work out for shawls as I hope they will, and it might have taken me about 10,000 yards of lace to learn this, but with my stash, it could have been worse.  Much, MUCH worse.

Rather than starting another scarf for portable knitting, I opted for: 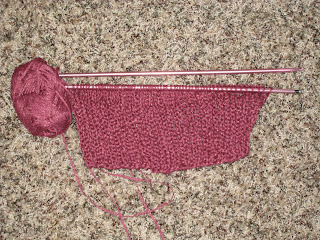 a new sweater!  I might be obsessed with yardage, but I haven't yet given up on finishing those 12 sweaters by December, and those are size 10.5 needles and bulky weight skeins of only 98 yards and it's a stockinette sweater.  I'm still mostly obsessed with the green fingering-weight sweater, but when I need a break and the hope of finishing a sweater soon, this is a nice change.  Not to mention, this is a bit easier to work with when the muscle relaxers kick in.........

I have deleted an earlier post today because an anonymous commenter quite rightly took me to task for it.  I had been really ticked off about a comment on one of my posts that had nothing to do with knitting or my post, but was just a promotion for the commenter's own blog, which is irritating enough, but the blog had nothing whatsoever to do with knitting.  What very understandably chapped my anonymous commenter is that I complained that it was a religious blog.  I can SO understand why that would offend someone, and I would like to apologize to her directly, but that's the problem with anonymous comments--I can't.  So, here I am.  I am apologizing to the knitting internet at large--she was right, I was absolutely wrong, and I wish I could set it straight if I could.

She correctly asked me if I would have been so angry if it would have been a blog about writing, knitting, another type of religion, or by a liberal, and I would say knitting, no.  Anything else that is divisive--YES.   This is a KNITTING blog.  The knitting world is my safe-haven.  Now that we're only weeks away from the election, Facebook and Pinterest have become only about divisiveness.  Everything else on the internet seems to be about division--this religion over that religion, this political belief over that one.  Here in the knitting world we're not liberals or conservatives, Mormons or Catholics or Muslims or whatever.  We're just knitters.  So, do I still find it offensive that someone would try to promote a religious blog via my knitting blog?  Yes--it's inappropriate.  Call me old-fashioned, but I believe everyone has to find his or her own way to a spiritual belief--or lack of one--and I hate proselytizing  as much as I hate door-to-door salespeople and telemarketers and advertisements.  What I think and believe is up to me, and I do not appreciate anyone pestering me or trying to influence me, and for it to happen on my KNITTING blog was my final straw.  I did NOT mean to insult anyone's religion or beliefs, but I can absolutely understand that is how I came across.

You were right, I was wrong, and I truly apologize.
Posted by Toni at 11:03 AM 4 comments: