And Even MORE Knitting Time

Boise's temperatures have been dropping down in the single-digits lately, which is a bit colder than we normally get.  Of course, this makes a great excuse for the abnormal amount of knitted goodies we own, but it turns out that it isn't a great thing for my back.  Or, I should say, for the second back injury that was caused by the new pt exercises.  I'm not sure if it was a strain, sprain, or just a pulled muscle, but the treatment is pretty much the same regardless:  Rest, Ice, Compression, Elevation.  Okay, I have no idea exactly how to "elevate" my backside, and like all women everywhere, I've been trying to "compress" it for years.  It had been getting better quite steadily, but the cold snap has caused the muscles to tighten, causing them to hurt, causing me to clench my muscles even more, which hurts even more.........you get the idea.  Luckily, the Valium does help, but it still meant spending yesterday totally and completely flat in bed.  So: 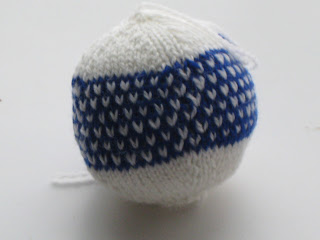 My current new favorite ornament.  The basic pattern is that of the 55-knitted ornament book, but I made up the color scheme.  I can knit while drugged, but I cannot for the life of me read charts while drugged.  It was followed by another mitten: 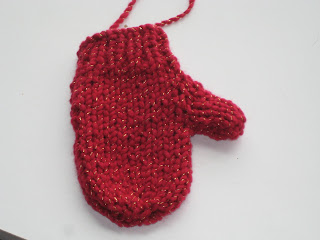 and a nap.  And more drugs.

Today is better, and I managed enough time off Valium to start the second ornament of the book: 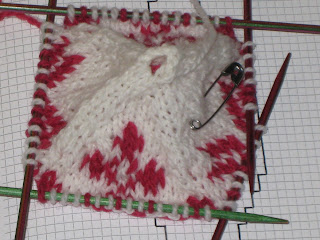 and even decided to do a little long-overdue blocking: 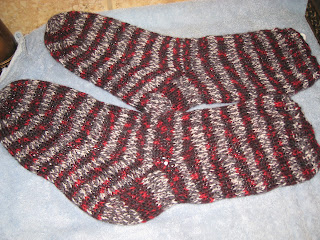 I realize there are lots of drugs happening here, but I don't think the INSANE wideness of the lower sock is drug-related.  I'm hoping it shrinks a bit as it dries--otherwise I'm going to have to find someone with very swollen feet.  Or, as it seems, ONE swollen foot.

To be on the safe side, I don't think I'll be doing any more blocking today.  Maybe just some VERY safe stockinette knitting.........