Another Fast Month Goes By....

As you might have guessed from the general lack of activity on this blog, the new job is pretty demanding.  October was our big "sale," so there was tons of pressure to get everything signed leading up to it, but of course now that it's over, the pressure hasn't let up.  Plus they're remodeling the office to an "open office" design--throwing out, of course, the egalitarian origins of no offices for management--and just taking away all personal space from the sales team.  Originally, they were just going to send us home to work during the remodel, but then no one could micromanage, so even though there's no real space,we're expected to show up and work in the office, regardless.  Did I mention that I think we're up to 11 or 12 people leaving just since I started?

I've been knitting a lot to reduce stress, which really isn't helping, though I'm getting a sweater out of it: 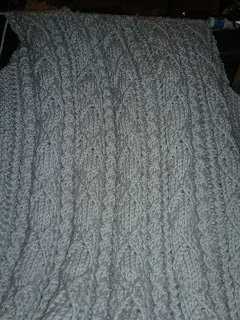 The back and now both fronts are done, and I'm working on the sleeves.  I made so much progress during our trip for Andy's marathon that I've just kept with this sweater, and while finishing 5 before the end of the year might not be possible, finishing this one certainly is.  We also took a crafting weekend last weekend, and I got the top done for what might be one of my favorite color schemes for the Spicy Spiral runner done: 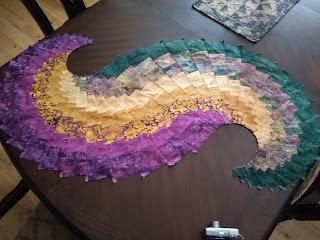 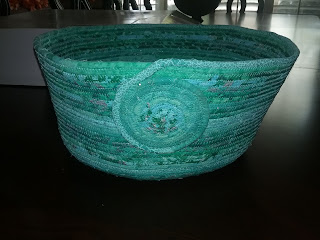 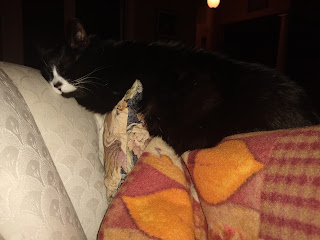 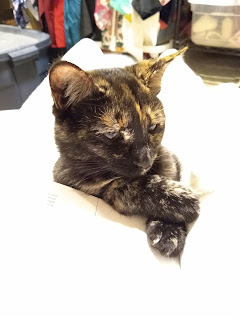 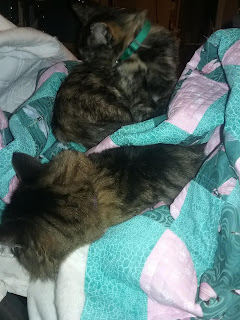 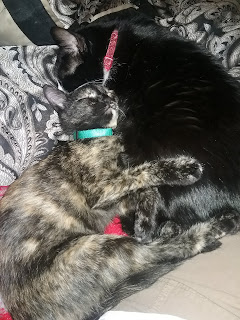 There have been a lot of kitty cuddles.  I think some of it has to do with how cold it's gotten already, but it's still cute.