For those of you who are curious about EZ's Epaulet Jacket shaping, you can see some of it here: 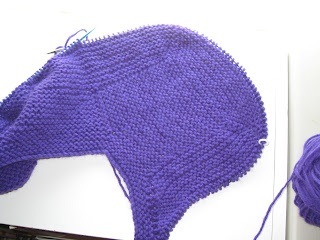 I'm guessing the shoulder will be a bit boxy since it's based on a square, but I still want to see how it turns out.

The TENTH cross stitch thread is in progress: 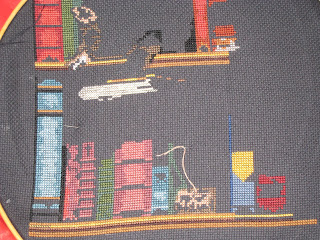 though not quite finished.  Obviously, doing 12 threads on this thing is actually keeping me sort of interested in it.  If I were thinking about ALL the stitching left to be done, I'd be sobbing in the corner, but just having to do 12 threads on it is doable.  I think.

The sewing room project has generated a few patterns and books to be donated: 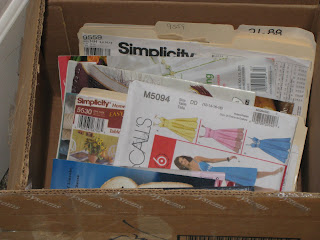 I wish it were overflowing, but getting myself to admit that there is ANYTHING in there I don't need or won't eventually make is rather a unique accomplishment, so it's a start. 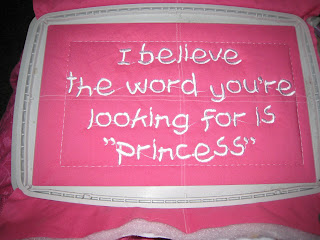 The new "Baby Attitude" quilt is in process.  I was a bit disappointed to see the quotation marks turn out to be going the wrong direction, but after playing on the software program for a little while, it turns out I don't have the faintest idea how to have fixed that anyway, so we'll chalk this up to "close enough." 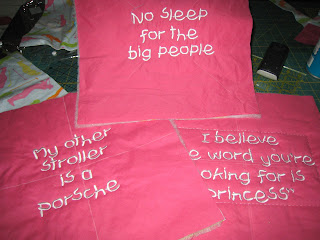 Three saying blocks are done, a fourth is on the machine, and 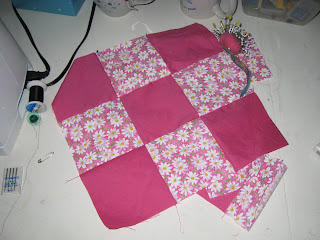 one of the checkerboard squares is assembled!  I'm really wishing right how I had made it "12 sweaters, shawls, or quilts."  Maybe next time..........