March Project Of The Month

While I really, really wanted to spend Finishing Friday working on the tapestry jacket or the new quilt, it occurred to me that doing strange projects like "Project of the Month" bags might be far easier and even less stressful if I stopped waiting until the very last minute to finish them. (Go figure).  So, most of Friday and the better part of today has been spent madly sewing, and 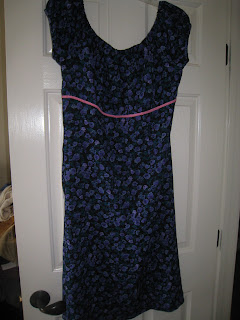 ta-da!  A dress which is not overly well done, has huge problems where the trim and the zipper coincide, and won't be able to be worn for at least another 3 months without hypothermia.  But a Finished Project is a finished project.

I decided to go with the pink trim for the well-thought out reason that I simply couldn't find anything else.  I did have a little lavender ribbon-type yarn that matched better in color 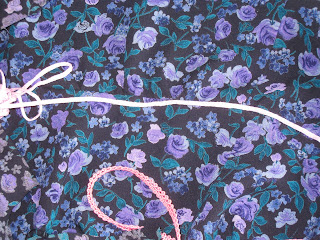 but it was too thin and I thought might look slightly anemic.   And I decided that even if the results weren't perfect, I've never sewn on trim before, so it could be a Learning Opportunity if it didn't turn out well.  Using invisible thread and one of the several zig-zag stitches in Emma's repertoire (which someday I need to figure out the various uses of), 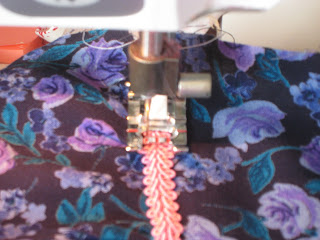 I think it will stay attached at least as long as the mystery material holds up.  I have a vague recollection that I purchased it at the sale table in Wal-Mart, of all places, so my expectations aren't high.  A retail empire built upon a reputation of selling the cheapest crap possible is not to be trusted.  But, chalk up another 2.5 yards from the fabric stash and the March Project of the Month done!

Now, I'm off to set up Jeeves and take him for a test run.  I don't have high expectations, and will be doing some felt gift bags so that when if the same stupid problem surfaces in spite of whatever the idiotic less-than-inspiring repair guy said, I won't have trashed a more valuable piece of material.