They Just Save It All Up For Me

It seems I spoke too soon. 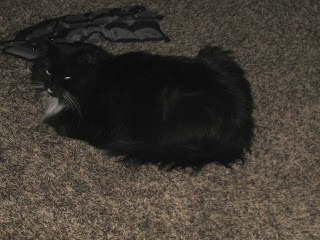 Theo was able to pee Monday morning, but by evening not so much.  He could get small amounts out, which is usually the sign the trouble is going away, but it's not been followed by getting worse.  So Tuesday morning, I packed up Theo in the cat carrier and bustled out the door first thing so I could have my little buddy at the vet's when they opened at 7:30......which would have been a much better plan if the VETS arrived at 7:30 as well.  They, however, roll in at 9:00, so to add to his stress issues, Theo spent 3 hours at the vet yesterday in addition to getting his pain shot.  I was finally able to pick him up and by the time we were back home and everything taken care of, my little buddy and I both needed a nap.

Not to be outdone, I woke up to find Calisto had done unspeakable things in the guest bathtub--tracking it all over the floor and carpet for extra fun.  Theo's vet visits always freak her out a little (I'm not sure why, as she doesn't like him), but this was a new level.  Actually, REPEATING it after I had thoroughly cleaned up the first round is a new level.  Someone is spending the day outside.  She's always been prone to stomach problems so I'm not actually very worried, but if she's still having issues in the morning, it will be her turn for the vet.  What's more fun for a vacation than vet visits?

Needless to say, yesterday didn't see a lot of crafting.  I did make a new felt heart, 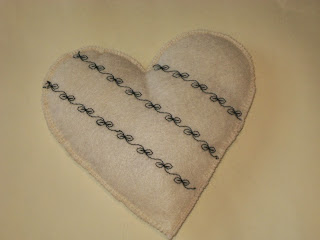 which I generally am pleased with.  I tried machine zig-zagging the edges and don't care for the results, but I like the decorative stitching idea.  And we can add cream-colored embroidery floss to the list of things to get soon.  As well as, it seams, cream colored felt.  I had a new ornament I wanted to make out of cream felt, only to discover I seem to have used it all up on the cookie ornaments.  My PLAN is to make a run to Joanns tomorrow after physical therapy.  I think, because I've had something new to play with, I'm ready to be trusted, and if not, I'm usually a bit sore and nauseous after physical therapy, and if THAT doesn't cramp someone's shopping spree, I don't know what will.

In the meantime, I haven't forgotten about the Fall Back stashdash, so 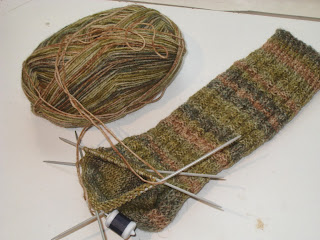 there are 30 new  rows on Andy's socks, completing "Let's Stay Together" and getting me somewhat closer to completing "Soul Mates."  Okay, yes, this is still the first sock, but frost finally took down the rest of the garden yesterday, so Finishing Fridays can pop back into regular existence now. 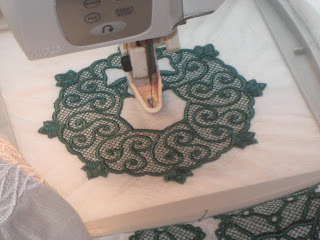 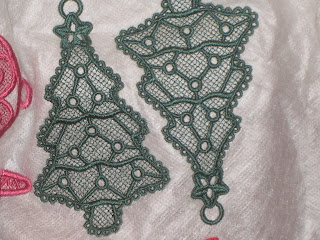 I have been playing with new ornaments (still), 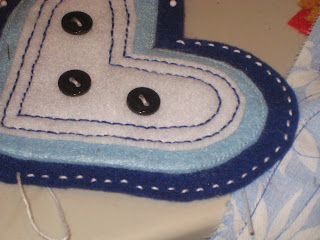 am finishing up this ornament, and 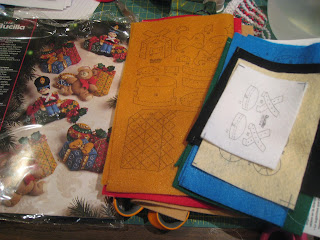 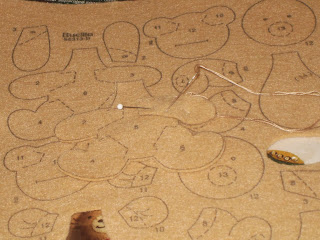 have finally gotten the courage up to try the felt ornament kit I bought last year.  After opening the package and seeing the itty-bitty pattern pieces, I had set it aside for a braver moment.  I've spent a lot of the last year on pain medication, and this isn't generally the sort of thing that's a good idea when a bit fuzzy around the edges.  But when I ordered the thread from Joanns to be ready for this week, I also found this, 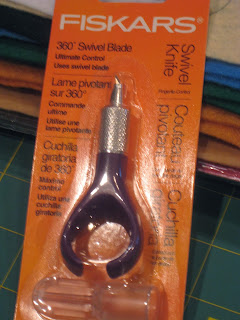 which seemed a wise investment for someone who can end up in the ER after a tussle with a turkey.  Exacto-knives scare me to no end, but I think I might be able to use one that fits on a finger and theoretically can't get anywhere near the rest of me.  It turns out one starts with putting the body of the bear together, which even I can do with regular scissors, so my first bear is getting his arms today without the risk of me being proved wrong.  Luckily, he hasn't heard of the recent bear atrocities that befell his recent cotton brethren, but he doesn't have eyes or ears yet, so that might be helping........