A LOT of progress.  With a sidekick who is still not quite sure if he likes Bernie, 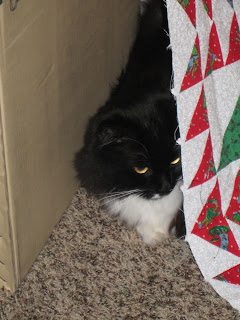 I finished the last block for the Christmas quilt, sewed all the blocks together, added a small border, 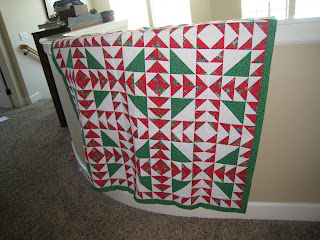 then swept the floor downstairs so I could do this 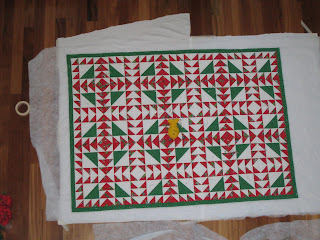 I'm sure other people have different ways of doing this, but taping the backing onto the floor and then pinning everything onto it is the only way I don't get massive puckers in the back of the quilt.  In the future, if I were to use this quilt design again, I would make even numbers of blocks for each row--that way all the edges would end with the same color.  But, I think this is going to be a nice size, and I am STILL hoping to finish it for a Christmas gift (I know--I could have brighter ideas during the 100-projects year), so I'm going to live with it as it is.  The backing is massive because I first had tried putting together a back piece that was only slightly bigger than the quilt top....and discovered after washing it, ironing it, and taping it that I had somehow made it about an inch too small and had to start all over.  Let's just say that the next one was perhaps a bit of an overreaction.......

Bernie's walking foot--which I bought when I bought Bernie because I just haven't spent enough money lately--comes with PARTS.  That was a bit intimidating, I have to admit.  There are two guides, two feet, and something which I am still unclear about, but which doesn't seem to be necessary if one isn't using the guides. 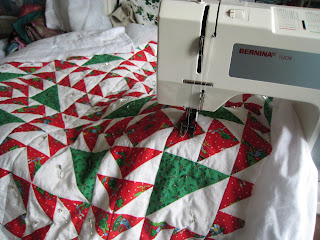 I am just doing a simple stitch-in-the-ditch (or mostly--I'm rather crooked at times....er, often....), so after figuring out which foot is for quilting & which for other sewing and THEN figuring out how to change the foot, I was off!  I'm rather pleased with myself to have gotten so far in one day. You might have noticed that quilts seem to have a disturbing way of dropping off the blog either part way through the piecing, or right after the top is together & a border or the pinning to the batting is needed.  In one day, I made it past my own personal quilting Bermuda triangle, and I haven't yet really derailed past this stage, so there is hope that this will make it to FINISHED PROJECT STAGE!